French President Emmanuel Macron offered to begin discussing with other European countries the role that France’s nuclear deterrent can play in their collective security. 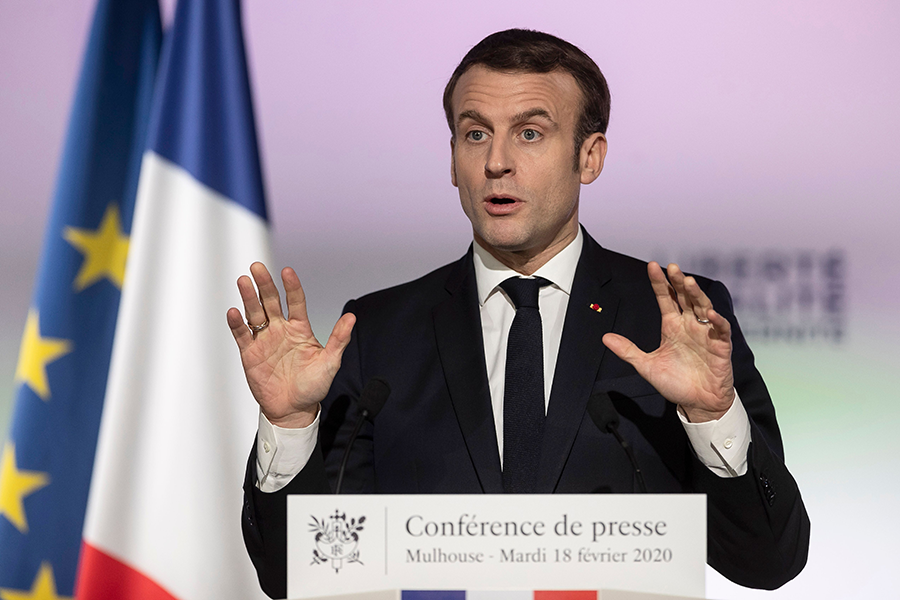 France’s nuclear forces “strengthen the security of Europe through their very existence,” Macron said at the military school École de Guerre in Paris on Feb. 7. An erosion of “the comprehensive security framework” that protects Europe affects France’s defense strategy, he said, which means that “France’s vital interests now have a European dimension.” France’s nuclear deterrence “ensures our independence, our freedom to assess, make decisions, and take action. It prevents adversaries from betting on escalation, intimidation, and blackmailing to achieve their ends,” he said before extending the offer.

At the same time, Macron argued that the international community must limit the role of nuclear deterrence to “extreme circumstances of self-defense,” with the overall goal of preventing war.

“France’s nuclear doctrine strictly adheres to this framework,” he said. France currently has about 300 nuclear weapons in its arsenal.

During his address, Macron outlined three “paradigm shifts” underway in the world. The first he described as strategic, in which “a new hierarchy of powers” is emerging and bringing with it the heightened risk of conflict and military escalation due to competition.

The challenging of “a multilateral order based on law” defines the second paradigm shift, he said, illustrated by the demise of the Intermediate-Range Nuclear Forces Treaty last August. (See ACT, September 2019.) “Europeans must collectively realize today that, without a legal framework, they could quickly find themselves at risk of another conventional and even nuclear arms race on their soil,” Macron said. “They cannot stand by.”

The final shift involves the emergence of new technologies and their potential role in conflict. All of these paradigm shifts, he said, demand that the world think about what the future of war will look like. Macron suggested that the heads of state of the permanent members of the UN Security Council (China, France, Russia, the United Kingdom, and the United States) convene in order “to fully discharge [their] mandate to maintain peace and international security” in this changing landscape.

Macron presented a four-pillared strategy for confronting these paradigm shifts and achieving peace. The first pillar he called the “promotion of an efficient multilateralism,” to include an increased investment in defense by European countries and a renewed international arms control agenda.

Regarding arms control, the president urged Europe to “rethink disarmament” so that it contributes to international security and highlighted France’s “unique track record in the world,” given its irreversible dismantlement of land-based nuclear weapons, nuclear testing facilities, and fissile material.

The next two pillars Macron described were the development of strategic alliances focused on promoting peace and security and the establishment of greater European autonomy.

Macron dubbed national sovereignty as the final pillar, saying, “if France is to live up to its ambition and its history, it must remain sovereign.”