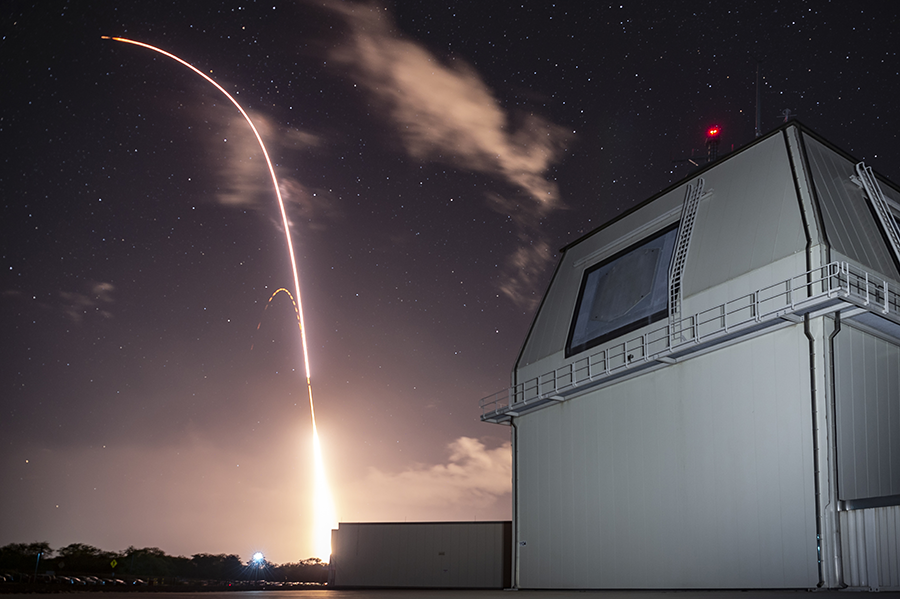 The MDA is asking for $39.2 million for the Aegis system to provide “an initial underlayer capability to” the Ground-Based Midcourse Defense (GMD) system based in Alaska and California. Its request also contains $139 million to “initiate the development and demonstration of a new [THAAD] interceptor prototype to support contiguous United States defense.” The agency is planning to test this capability in fiscal year 2023.

In addition, the MDA plans to test the Aegis Standard Missile-3 (SM-3) Block IIA interceptor, which was originally designed to counter regional missile threats during their midcourse phase of flight, against an ICBM target this spring. Aegis interceptors can be based on Navy ships or on land.

Like the SM-3 Block IIA interceptor, the mobile, land-based THAAD system was originally designed to defend against short- to intermediate-range missile threats in their descent phase of flight.

“[W]hat this budget really does for us is starts to say, let’s take advantage of these regional systems that have been so successful and are very flexible and deployable,” Vice Adm. Jon Hill, the MDA director, told reporters on Feb. 10.

“When we say ‘layered homeland defense,’ what we mean is, we want to give the country options,” he said.

Such a layered missile defense theoretically could provide four opportunities to intercept an incoming North Korean ICBM: two shots with the existing GMD interceptors, a third shot with the SM-3 Block-IIA missile, and a fourth shot with an extended-range THAAD interceptor.

The proposal to expand the U.S. homeland missile defense footprint is consistent with the 2019 Missile Defense Review, which specifically called for bringing the SM-3 Block-IIA missile into the national missile defense architecture. (See ACT, March 2019.)

An increase in the number of U.S. interceptors capable of intercepting ICBMs could exacerbate Russian and Chinese concerns about the threat the defenses pose to their nuclear deterrents and prompt them to take steps to counter new U.S. missile defenses.

The GMD system would receive about $1.7 billion under the budget proposal, a decrease of about $465 million below last year’s spending level. Of the $1.7 billion, $664 million would be for the new Next Generation Interceptor. The MDA decided to pursue development of the interceptor last year in the wake of the demise of the Redesigned Kill Vehicle. (See ACT, October 2019.)

The MDA “will continue design and development activities for two competitive interceptor development contracts scheduled to be awarded in 4th quarter of fiscal year 2020,” according to the budget documents. The agency is aiming to begin fielding the new interceptor in the late 2020s.

Programs included in the fiscal year 2020 request that are not funded in the latest submission include two homeland missile defense radars for deployment in the Pacific, a space-based neutral particle beam to destroy missiles during their boost and midcourse phases of flight, a multiple-object kill vehicle to arm a single ground-based interceptor with several kill vehicles, and an airborne laser to zap ballistic missiles during their boost phase.

In addition, the budget request includes no funding for an Air Force program included in last year’s request to develop an air-launched interceptor for boost phase defense and for the Space Development Agency to study space-based interceptors.