Top Russian Foreign Ministry officials reiterated their interest in extending the New Strategic Arms Reduction Treaty (New START) and issued a fresh set of warnings about the future of the treaty because, they say, the Trump administration continues to refuse to engage in talks on its extension. 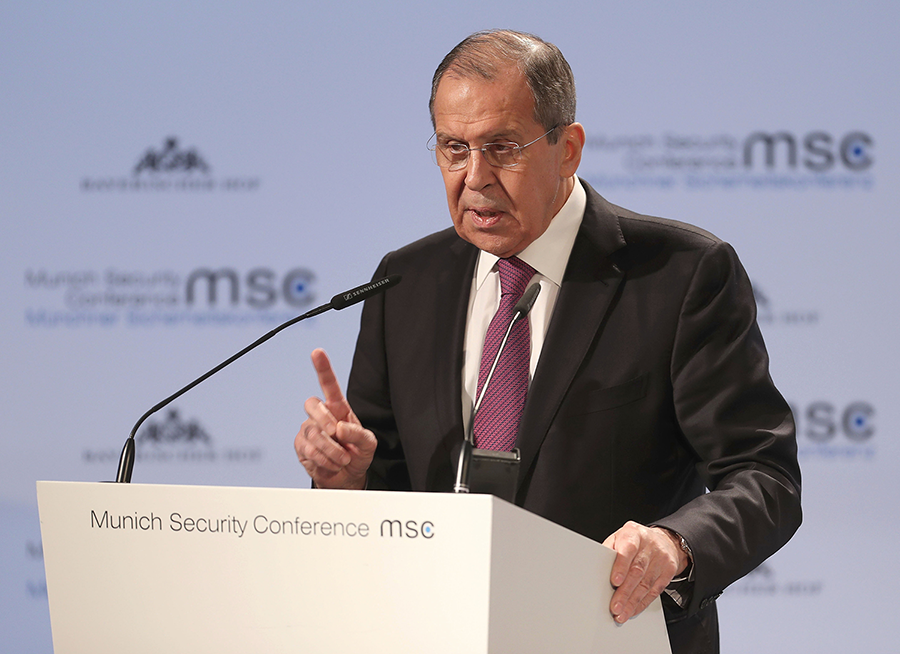 Washington “is evading any serious discussion, making public discouraging signals regarding the future of this treaty,” said Russian Foreign Minister Sergey Lavrov at a nonproliferation conference Nov. 8 in Moscow.

Lavrov’s deputy, Sergey Ryabkov, voiced similar criticisms at the conference, saying, “[It] looks as if the United States is dragging its feet, if not downright looking for an excuse to get rid of New START right after tearing up” the Intermediate-Range Nuclear Forces Treaty.

The United States did not send an official representative to the conference.

The remarks from Lavrov and Ryabkov came a week after Vladimir Leontyev, deputy director of the Russian Foreign Ministry’s nonproliferation and arms control department, declared that there is not enough time to negotiate any replacement for New START before it expires in February 2021.

“It’s evident that given the time left, we won’t be able to draw up any full-fledged document to replace it,” said Leontyev at a Nov. 1 meeting of the Valdai Discussion Club.

Leontyev also warned that time could run out to secure a five-year extension of the treaty. He said that Moscow would require “at least six months” in order to process a “technical extension.” Ryabkov told a Russian newspaper in July that an extension would require the approval of the Russian Duma.

Following a meeting in Beijing on Nov. 27, Ryabkov said that Russia has proposed to the United States a five-year extension of New START, but reiterated that Moscow is open to extending the treaty for less than five years. A shorter extension "would probably not be an optimal signal," he said, but would be "better than nothing."

As Russia emphasizes the importance of extending New START and indicated its readiness to begin talks on an extension, the Trump administration remains officially undecided about the future of the pact and continues to talk about the need for a more ambitious arms control agreement with Russia and China. (See ACT, November 2019.)

During an Oct. 22 interview with Fox News, President Donald Trump repeated the call for a trilateral agreement. “I believe that we’re going to get together with Russia and with China, and we’re going to work out our nuclear pact,” he said.

Secretary of State Mike Pompeo told reporters in Brussels on Nov. 20 that “the world has changed since New START was originally created” and “it’s no longer the case that [the arms control process] can only be the United States and Russia.”

China has stated repeatedly that it is not interested in entering negotiations on a multilateral agreement. Currently, the United States has more than 6,000 total nuclear warheads, while China has about 300.

“Our position is that we should engage with the Russians now in discussions about including those weapons systems…which are not covered by the treaty,” John Sullivan, currently deputy secretary of state and the nominee for U.S. ambassador to Russia, said at his nomination hearing Oct. 30.

“[I]f we were simply to extend New START now, without touching those other systems, which the Russians have been invested in, we’re tying our hands in not limiting what...the Russians see where their growth [is]…in their strategic assets,” he added.

Russia said for the first time last month that two of the weapons—the Sarmat, a new intercontinental ballistic missile, and Avangard, a hypersonic glide vehicle—would count under the treaty. Article V of the treaty states, “When a party believes that a new kind of strategic offensive arm is emerging,” the two sides can discuss how to take the systems into account.

“If Sarmat comes into existence at least as a prototype while the treaty is still valid, including in the extended period, there will be no problems from the point of view of the New START,” Leontyev said. “There should be no serious problems with Avangard either.”

The Russian Defense Ministry said in a statement that per the terms of the treaty, “a U.S. inspection group was shown the Avangard missile system with the hypersonic boost-glide vehicle” in Russia on Nov. 24–26.

Leontyev added that there is no chance of including the three other new nuclear weapons systems—Kinzhal, an air-launched ballistic missile; Burevestnik, also known as Skyfall, a globe-circling nuclear-powered cruise missile; and Poseidon, a nuclear-powered torpedo—without amending the treaty, in which case Moscow would have its own list of U.S. capabilities that should be addressed. He said that Russia was open to discussing these systems in the format of strategic stability talks.

The Kinzhal reportedly began trial deployment in December 2017. Russia is currently planning to field the weapon on the shorter-range MiG-31 aircraft, in which case the Kinzhal would not be accountable under New START. Initial fielding of the Avangard and Sarmat could begin as soon as the end of 2019 and 2021, respectively, according to Russian officials. The Burevestnik, a recent test of which resulted in a deadly explosion, and Poseidon are still in development and unlikely to be deployed in larger numbers or before 2025, according to independent open source and intelligence assessments. (See ACT, October 2019.)

It is not clear if the two sides discussed Russia’s new weapons during the most recent meeting of the Bilateral Consultative Commission, New START’s implementing body, which met on Nov. 6–13.

The State Department released a statement Nov 14, saying, “The U.S. and Russian delegations continued the discussion of practical issues related to the implementation of the treaty.”

Moscow and Washington last held strategic stability talks in July. Leontyev said another round of discussions had been scheduled for November but had to be “postponed indefinitely” due to staff changes at the State Department.