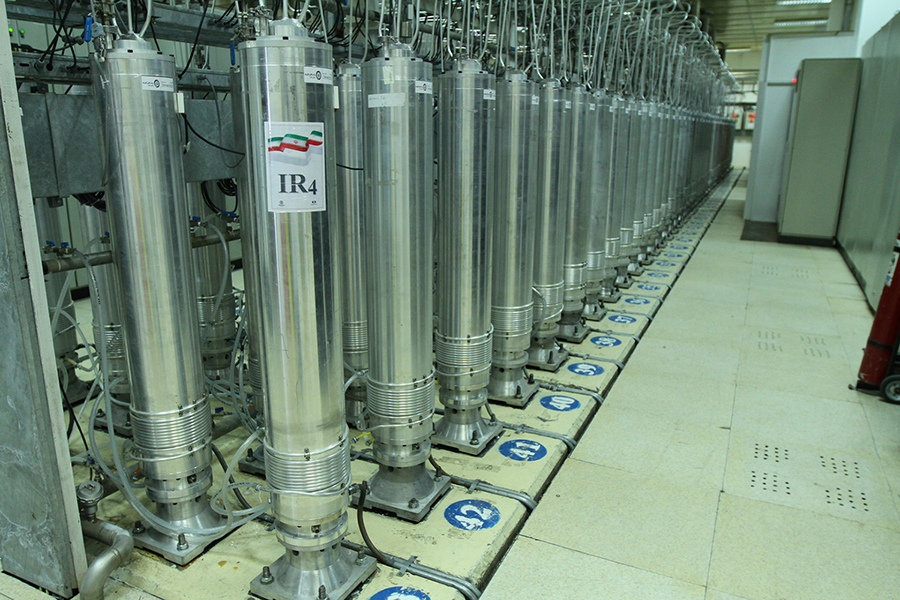 Iranian President Hassan Rouhani announced on Nov. 5 that Iran had “no other choice” but to resume enrichment at Fordow, violating the 15-year prohibition on enrichment at that site put in place by the Joint Comprehensive Plan of Action (JCPOA).

The nuclear deal allows Iran to retain 1,044 centrifuges at Fordow, but requires Tehran to convert the uranium-enrichment facility into a medical isotope production and research center.

Behrouz Kamalvandi, spokesman for the Atomic Energy Organization of Iran, said on Nov. 6 that 696 of the centrifuges allowed at Fordow would be used for enriching uranium up to 4.5 percent uranium-235, slightly above the 3.67 percent U-235 limit set by the deal. The remaining 348 machines will be used for medical isotope production, he said.

The International Atomic Energy Agency (IAEA) confirmed in its Nov. 11 report that Iran began enrichment at the site on Nov. 9.

This is the fourth step Tehran has taken in breach of its JCPOA commitments over the past six months. In May 2019, Rouhani said Iran would “reduce compliance” with its nuclear obligations under the deal in response to the Trump administration’s withdrawal from the deal in May 2018 and its reimposition of sanctions in violation of the accord. (See ACT, June 2019.)

The other parties to the deal (China, France, Germany, Russia, the United Kingdom, and the European Union) criticized Iran’s decision, but said they remain committed to preserving the nuclear deal.

In a Nov. 11 joint statement, the foreign ministers of France, Germany, the UK and the EU foreign chief said the Fordow decision “represents a regrettable acceleration of Iran’s disengagement” from its commitments under the nuclear deal.

The officials said they “stand ready to continue diplomatic efforts” but it is critical for Iran to uphold its commitments under the nuclear deal and work with them to reduce tensions.

Rouhani said Iran continues to favor a diplomatic resolution to the dispute, but he put the onus on the remaining parties to find a way to preserve the accord. He said on Nov. 5 that Tehran would come back into compliance with its obligations if the parties can reach a “proper solution for the removal of sanctions on our export of oil and metal” and facilitate banking transactions.

Rouhani also said that Iran will take another step in 60 days in violation of the deal if the parties to the JCPOA do not deliver on sanctions relief. He did not specify what action Iran will take.

The European officials did not address Iran’s threat to commit another breach, but they did raise the possibility of using the dispute resolution mechanism laid out in the JCPOA to “resolve the issues related to Iran’s implementation of its JCPOA commitments.”

Any JCPOA party can trigger the dispute resolution mechanism to address an allegation of noncompliance with the agreement. If the party feels that the resolution process did not address the issue, that party “could treat the unresolved issue as grounds to cease performing” its JCPOA obligations “in whole or in part” and notify the UN Security Council, which can snap back sanctions on Iran lifted by the nuclear deal.

U.S. Secretary of State Mike Pompeo said on Nov. 7 that Iran’s “expansion of proliferation-sensitive activities raises concerns that Iran is positioning itself to have the option of rapid breakout.”

Accumulating enriched uranium produced by the 696 IR-1 centrifuges represents about a 15 percent increase in Iran’s current enrichment capacity. The additional enriched uranium will slowly erode Iran’s breakout time, or the time it would take to produce enough material for one nuclear weapon, which was 12 months when the JCPOA was fully implemented.

It is unclear if the cooperative efforts to convert Fordow into a research and development center will continue in light of Iran’s decision to resume enrichment. The JCPOA requires the parties to the deal to assist Iran with the conversion, and the Trump administration had waived sanctions, most recently on Oct. 31, allowing that work to continue.

Yet, Pompeo reversed course on Nov. 18 when he announced the U.S. sanctions waiver for converting Fordow would be terminated on Dec. 15. He said Iran should “reverse its activity there immediately.”

The United States views the Fordow facility as more of a risk than the facility at Natanz, where limited enrichment is permitted by the JCPOA, because of its location. Fordow is an underground facility built into the mountains near Qom. U.S. military officials have stated that the location of the facility would make it difficult to destroy with a military strike.

In addition to confirming enrichment at Fordow, the IAEA also noted in its Nov. 11 report that Iran is accumulating enriched uranium produced by 164 IR-2, 164 IR-4, and 30 IR-6 advanced centrifuges at its Natanz site. Under the JCPOA, Iran is allowed to test limited numbers of advanced machines with uranium but is not permitted to accumulate enriched material.

Rouhani said in September that Iran would no longer be bound by the research and development restrictions in the nuclear deal. (See ACT, October 2019.)

Iran also informed the agency that it planned to install newly designed centrifuges at Natanz for testing. The JCPOA permits Iran to develop new centrifuges using computer modeling, but requires advanced permission from the Joint Commission, the body set up to oversee the deal, before beginning testing. It does not appear that Iran obtained this permission.

The IAEA report noted that Iran continues to abide by the additional monitoring and verification provisions put in place by the deal but encouraged Iran to “continue interactions” with the IAEA to resolve outstanding issues related to an investigation into uranium particles at an undeclared site.

IAEA Acting Director-General Cornel Feruta told the agency’s Board of Governors on Nov. 21 that the uranium was found at an undeclared location in Iran. He said that the matter remains unresolved and called for Iran to work with the IAEA to “resolve this matter promptly.”

Jackie Wolcott, U.S. ambassador to the IAEA, called the matter “profoundly concerning” in a Nov. 21 statement. 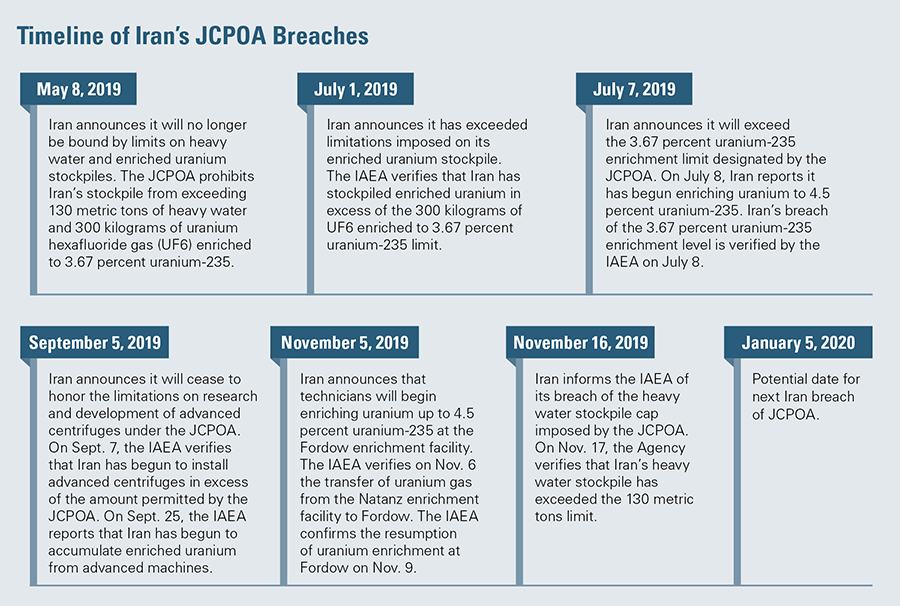