“Your association has taken a significant role in fostering public awareness of nuclear disarmament and has led to its advancement.”
– Kazi Matsui
Mayor of Hiroshima
June 2, 2022
U.S. to Host Disarmament Working Group

Diplomats from nearly three dozen nations, including China and Russia, will gather in Washington on July 2–3 for the first plenary gathering of a new working group to discuss a U.S. initiative, “Creating an Environment for Nuclear Disarmament” (CEND). The group will meet less than one year before the 2020 nuclear Nonproliferation Treaty (NPT) Review Conference, where the United States and other nuclear-weapon states are expected to hear criticism about the pace of nuclear disarmament. 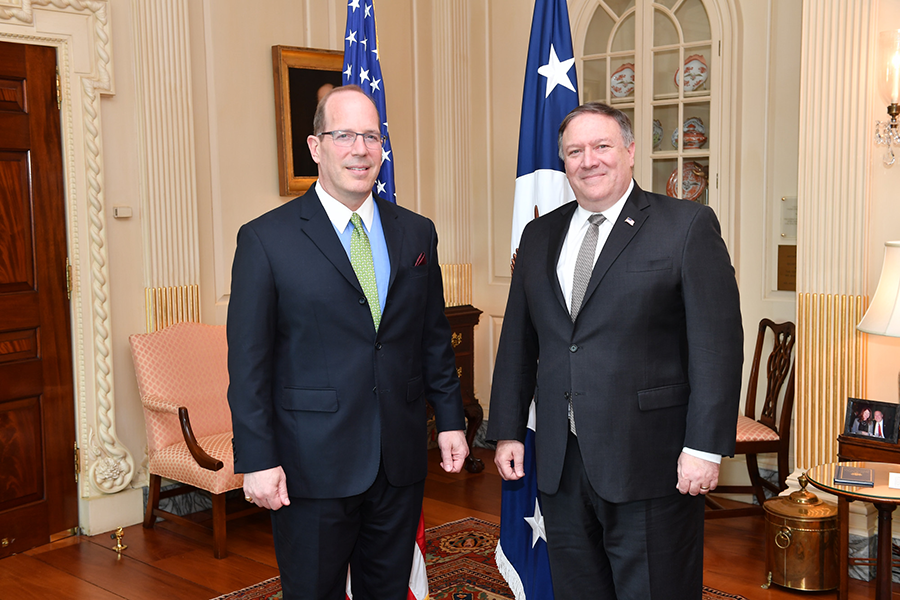 “The goal of the kick-off plenary is to identify a list of issues or questions relating to the international security environment affecting disarmament prospects and establish subgroups to examine and address some of these factors,” said a U.S. diplomatic note sent to government attendees ahead of the meeting.

U.S. officials floated the concept for the first time in a working paper circulated at the 2018 NPT Preparatory Committee meeting. It was originally billed as an effort to engage in a dialogue on the “discrete tasks” necessary “to create the conditions conducive to further nuclear disarmament.”

Since then, the concept has been refined somewhat and discussed at various forums. Christopher Ford, U.S. assistant secretary of state for international security and nonproliferation, promoted the idea at a conference outside London in December 2018, and the Netherlands hosted an academic colloquium on the idea April 15.

“The CEND initiative is intended to examine and address challenges to the global security environment,” said Robert Wood, U.S. ambassador to the Conference on Disarmament, in a May 2 statement at the 2019 NPT Preparatory Committee meeting, adding that the United States seeks to engage “politically and geographically diverse participants” in the dialogue.

The new approach, Wood added, was needed because the “traditional, numerically focused ‘step-by-step’ approach to arms control has gone as far as it can under today’s conditions.”

A U.S. working paper circulated in May suggested the discussion should focus on three areas: “measures to modify the security environment to reduce incentives for states to retain, acquire, or increase their holdings of nuclear weapons; institutions and processes…states can put in place to bolster nonproliferation efforts and build confidence in nuclear disarmament; and interim measures to reduce the likelihood of war among nuclear-armed states.”

The CEND initiative has generated varied responses. Close U.S. allies, including Japan and the United Kingdom, have expressed support for the dialogue. Several non-nuclear-weapon states have voiced skepticism, and privately, many have also expressed concern that the initiative is part of an effort to try to walk back earlier nuclear-weapon state commitments on disarmament.

Ireland, for example, said in a May 2 statement delivered at the NPT preparatory committee meeting that,

despite the grave existential threat posed by nuclear weapons, some states have argued that the present environment is not conducive to disarmament, and that pursuing the elimination of nuclear weapons is not realistic at this time. Ireland fully aligns with the [UN] Secretary-General’s view that disarmament is more essential in a deteriorated security environment. We equally believe that it is unrealistic to wait for, or expect, a perfect security environment to emerge; no such utopia exists, and if such conditions were necessary for progress, we would never be able to agree or achieve anything, including the treaty currently under consideration.

Several states which have accepted the invitation to participate in the July 2–3 working group meeting are expected to raise questions about how the uncertain status of U.S. support for existing nuclear arms control treaties, as well as the U.S. withdrawal from key multilateral undertakings, such as the 2015 Iran nuclear deal, may affect the environment for nuclear disarmament.

All five NPT nuclear-weapon states have agreed to attend the July 2–3 meeting, according to diplomatic sources who spoke with Arms Control Today. How Russia may try to shape the CEND dialogue is not yet clear, but Russian Foreign Ministry officials have been pressing the State Department and the White House to engage with them on a range of nuclear arms control and disarmament issues, including a structured dialogue on strategic stability and talks to facilitate an extension of the 2010 New Strategic Arms Reduction Treaty, which is due to expire in 2021.

Whether or when a second working group meeting will be scheduled is not clear, but U.S. officials said they “expect the activities of the [working group] to continue through this NPT review cycle and beyond, contributing to deliberations at the 2020 review conference.”