In 1974 and 1975, two influential Cold War nuclear strategists used the pages of the still-young journal Foreign Policy to debate how to achieve stability in the U.S.-Soviet nuclear rivalry. Their discourse contributed to the course policymakers followed for decades after and continues to have relevance today as U.S.-Russian arms control agreements appear to be on the rocks.

In the summer of 1974, Albert Wohlstetter published a pair of articles in Foreign Policy that crystallized and fueled the national debate on nuclear policy. He challenged the conventional wisdom that the United States and Soviet Union were engaged in a nuclear arms race defined by overestimation and overreaction, as well as spiraling moves and countermoves. He asserted instead that the Soviet Union was rushing ahead while the United States ambled backward. A race, at least a fair one, requires matching paces. Yet, there can be no race, Wohlstetter wrote, “between parties moving in quite different directions.”1

Wohlstetter’s claims that the United States was ceding strategic ground to the Soviet Union sparked a lengthy debate in Foreign Policy. Prominent thinkers and policymakers defended and prosecuted his thesis. They disagreed on how to measure nuclear superiority, how much the United States could afford to spend on its nuclear arsenal, and the perils and possibilities of engaging in arms control with the Soviet Union.

Of all the rebuttals to Wohlstetter that the magazine published, one stands out for its approach and imagery. Paul C. Warnke, a former defense official in the administration of President Lyndon Johnson and a staunch arms controller, did not challenge Wohlstetter’s scholarship or conclusions. He argued that the entire premise of his article was wrong: vying for advantage in the nuclear arms competition was a senseless exercise. He likened the United States and Soviet Union to two “apes on a treadmill,” accumulating more and more nuclear weapons in the futile pursuit of nuclear superiority. In Warnke’s opinion, the arms competition resembled less a race in which the two rivals were running at different paces and in different directions. They were instead “jogging in tandem on a treadmill to nowhere.”2

The debate in Foreign Policy came at a turning point in the U.S.-Soviet strategic relationship. U.S. President Richard Nixon and Soviet leader Leonid Brezhnev had just signed the 1972 Strategic Arms Limitation Talks (SALT I) agreement, a landmark accord that severely constrained the anti-ballistic missile (ABM) capabilities of both countries and placed five-year limits on their offensive strategic forces. Still, the pact failed to prevent both sides from pressing ahead with their nuclear weapons ambitions. The Soviet Union continued to build a new generation of multiple-warhead, intercontinental ballistic missiles (ICBMs) that U.S. strategists feared could threaten the survivability of U.S. land-based missiles and give Moscow escalation dominance in a nuclear exchange. Meanwhile, the price for Senate approval of SALT I was an extensive U.S. modernization program.

‘Is There a Strategic Arms Race?’

In his article, Wohlstetter set out to debunk the myths of the nuclear arms race and in the process undermine SALT I and Nixon’s policy of détente with the Soviet Union.

Wohlstetter took issue with the lexicon of arms controllers, bristling at what he considered their hyperbolic claims that the superpowers’ arms competition was “accelerating” and “spiraling.”3 In his opinion, this reliance on metaphor had led to an imprecise portrayal of the U.S.-Soviet strategic relationship. 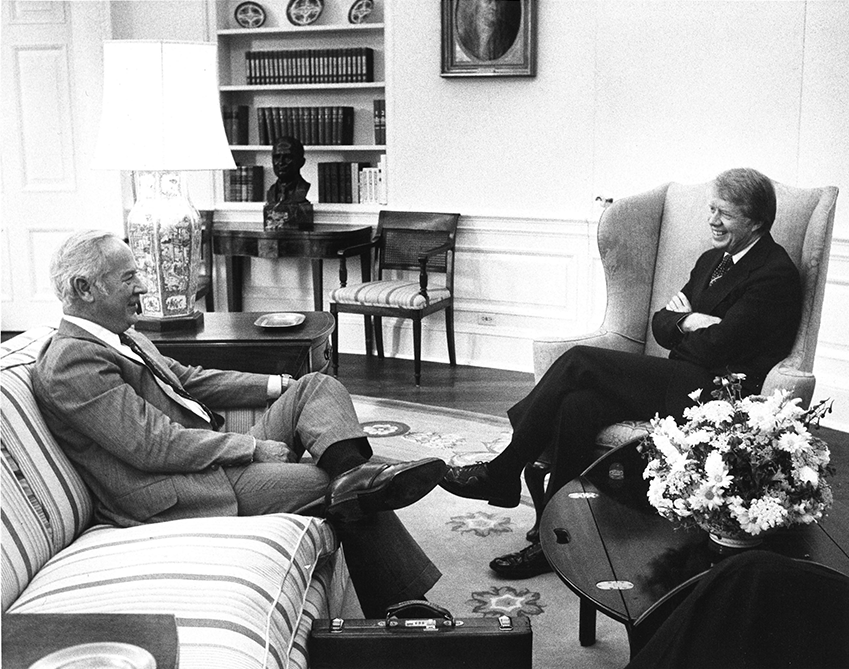 Culling declassified data from U.S. intelligence reports between 1962 and 1972, Wohlstetter concluded that the United States had chronically underestimated the number of nuclear weapons the Soviet Union would deploy. Through a buildup of ICBMs and strategic bombers, the Soviet Union had been surging forward, moving quickly from a position of strategic inferiority to one of rough parity with the United States. Contrary to the rhetoric of arms controllers, Washington was not overreacting to these developments with countervailing moves. Wohlstetter contended that U.S. strategic programs were actually in decline, with spending on offensive forces insufficient to meet the growing Soviet threat. Taken together, these findings painted an ominous picture of the strategic reality: Moscow was setting a pace that Washington neglected to match.

‘Apes on a Treadmill’

Titling his Foreign Policy article “Apes on a Treadmill,” Warnke used a simple metaphor to dispute Wohlstetter. As Warnke saw it, the United States and Soviet Union were stuck in a “‘monkey see, monkey do’ phenomenon,” in which each side reciprocated the arms decisions of the other.4 The United States responded to Soviet moves toward ABM deployments in the mid-1960s by building its own ABM systems and deploying multiple warheads on its strategic missiles to overcome defensive systems. In turn, Moscow had begun to take similar steps.

This quest for some numerical or technological edge by either side was futile, Warnke said, arguing that losing a cosmetic lead was no cause for concern because nuclear weapons served merely as offsets, not as exploitable resources for military and political gain. He strove to discredit the central premise of Wohlstetter’s article and lay bare the impulses driving the arms race.

To suppress these basic impulses, Warnke offered a daring initiative. Instead of trying to match or surpass Soviet weapon advancements, the United States should initiate a “process of matching restraint,” whereby the two superpowers would undertake a series of informal, reciprocal actions to uphold strategic stability.5 He proposed that the United States suspend many of its modernization programs. If Moscow responded by freezing its own strategic arms buildup, Washington could continue with further moderating steps. Warnke’s article ended where it started, with a metaphor: “We can be first off the treadmill. That’s the only victory the arms race has to offer.”6

The Wohlstetter-Warnke debate holds particular resonance for today. The United States and Russia are undertaking extensive modernization programs, refurbishing each leg of their nuclear triads and building new, exotic capabilities. As the two emphasize the role of low-yield, nonstrategic forces, nuclear weapons become instruments of statecraft with perceived military and political value. The arms control architecture is crumbling under this weight.

The visceral fear of falling behind, which Wohlstetter translated into mathematical proofs, has gained traction in the debate. The United States and Russia are striving to find an edge in their strategic competition as each develops capabilities to match or surpass the other, within and outside the parameters of existing arms control agreements. In this climate of heightened competition and suspicion, Warnke’s calls for reciprocating restraint are at risk of falling on deaf ears.

Looking back at the Wohlstetter-Warnke exchange in Foreign Policy may not resolve the complex issues of nuclear policy, but it throws them into sharp relief. In doing so, it raises the important question of whether the United States and Russia can afford to take bold initiatives and pursue mutual restraint in the name of strategic stability. Or as Warnke wrote in Foreign Policy, are the two forever doomed to continue “the solemn jog on the treadmill”?7

Paul S. Warnke is a congressional nuclear security fellow for Senator Chris Van Hollen (D-Md.) and the grandson of Paul C. Warnke. This article is adapted from his honors thesis for his master’s degree from the Middlebury Institute of International Studies at Monterey.