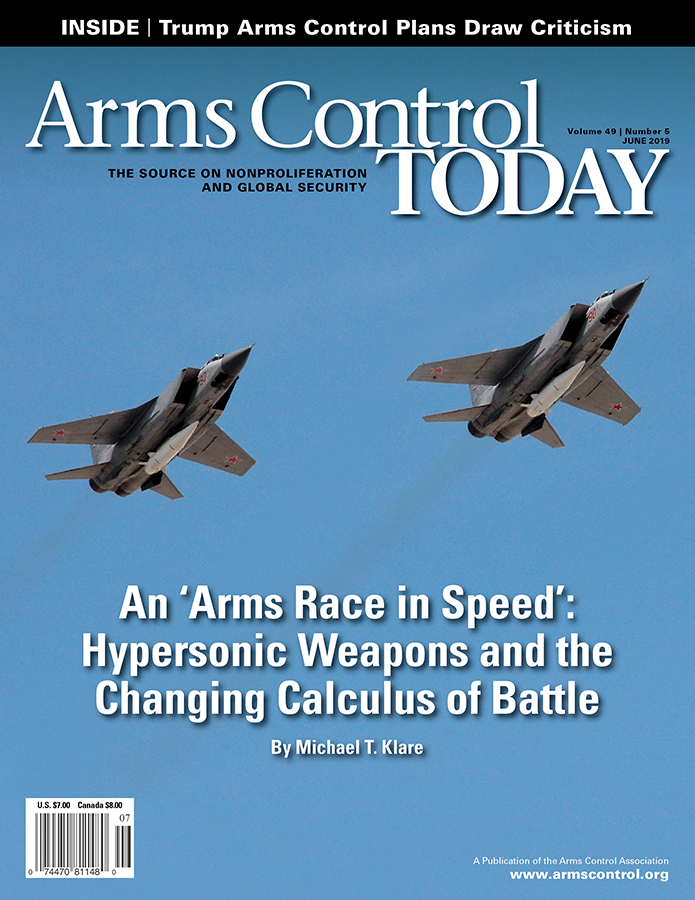 Michael T. Klare’s article “An ‘Arms Race in Speed’: Hypersonic Weapons and the Changing Calculus of Battle” (ACT, June 2019) analyzes hypersonic weapons developments in China, Russia, and the United States. South Asia is an equally relevant and important region in this regard. Hypersonic technologies have already begun proliferating in the region. For instance, India tested its indigenous Hypersonic Technology Demonstrator Vehicle (HSTDV) on June 12. It is also developing the BrahMos-2 hypersonic missile with Russia’s help. It aims to produce a scramjet engine capable of flying faster than Mach 5. These developments will not only destabilize the already precarious state of strategic stability in South Asia, but will also increase the risks of inadvertent escalation.

India will have the capability and confidence to conduct a counterforce strike against Pakistan. The plan could be to launch a speedy attack against Pakistan, and by using its ballistic missile defenses, India will shoot down incoming missiles. What if Pakistan launches a preemptive strike to avoid India’s first strike? In any case, the outcome will be mutually assured destruction. Not only this, the proliferation of hypersonic technologies will spur an unwanted arms race in the region.

In addition, unlike China, Russia, and the United States, hypersonic technology development is in its infancy in South Asia. With BrahMos-2 tests delayed, only one test of the HSTDV has been conducted. Pakistan is not known to have an indigenous hypersonic development program. Moreover, if China, Russia, and the United States reach an agreement on the issue, then there are more chances of avoiding a possible regional hypersonic rivalry in South Asia by making India part of the agreement.

Samran Ali works on nonproliferation issues at the Center for International Strategic Studies in Islamabad.