The United States has begun to eliminate its stockpile of more than 100,000 chemical munitions stored at the Blue Grass Army Depot in Kentucky. Workers destroyed the first weapon on June 7 following a May 29 ceremony to officially inaugurate the Blue Grass Chemical Agent-Destruction Pilot Plant, which Deputy Assistant Secretary of Defense Charles Ball hailed as “the beginning of the last chapter of U.S. efforts to eradicate chemical weapons from the face of the earth.” The site is the last of nine U.S. chemical weapons storage facilities to begin destroying their stocks, and the elimination work is scheduled to be completed in 2023. 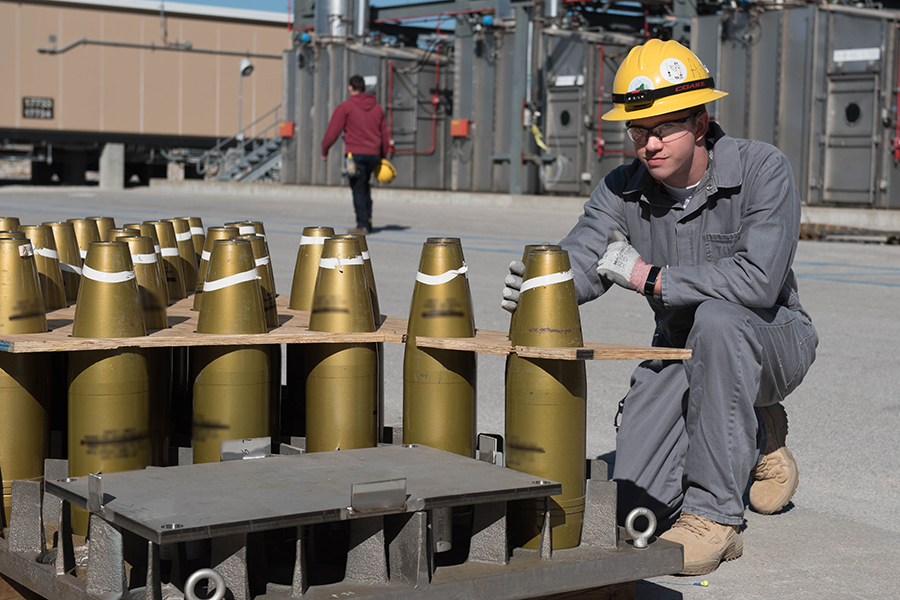 The site stored 524 tons of chemical weapons, about 1.8 percent of the 29,918 tons declared in 1997 when the United States ratified the 1993 Chemical Weapons Convention (CWC) and committed to the destruction of all U.S. weapons and bulk agent. The munitions at Blue Grass include artillery shells and rockets filled with mustard, sarin, and VX agents, according to the Program Executive Office–Assembled Chemical Weapons Alternatives, the organization responsible for eliminating the weapons.

The plant was built to destroy chemical agents through a two-stage procedure: neutralization, a “wet chemistry” process, followed by supercritical water oxidation, which converts the neutralized agents and the munition explosives into harmless water, salts, and carbon dioxide. Aging mustard munitions that cannot be easily neutralized by this process will be exploded under high temperatures in a static detonation chamber.

The United States amassed vast stocks of chemical weapons beginning in World War I, and for many years, it disposed of unwanted chemical weapons through crude methods such as burial, open pit burning, and ocean dumping. Political pressure during the Nixon administration led to experimentation with improved techniques, and incineration was eventually chosen as the most efficient and cost-effective practice.

In 1990, the United States and Soviet Union concluded the U.S.-Soviet Chemical Weapons Accord, obligating both parties to halt production and destroy all but 5,000 metric tons of their respective chemical arsenals by the end of 2002. This was followed by the multilateral CWC, which committed the United States to destroying its chemical arsenal by April 29, 2007, 10 years after the CWC’s entry into force.

The U.S. Defense Department began incinerating chemical weapons in 1990 at its storage facility on Johnston Atoll. After Congress banned the domestic transport of chemical weapons, plans to build three centrally located destruction facilities were replaced with a program to incinerate the chemical agents on site at all nine stockpiles.

Environmental and public health activists at Kentucky and other sites fiercely opposed this technique. “Many challenges were faced as citizens rejected incineration in favor of more contained treatment alternatives,” Craig Williams, director of the Kentucky Environmental Foundation Chemical Weapons Working Group and an early advocate of responsible chemical weapons disposal, told Arms Control Today. “Funding was cut on several occasions, and continuous changes in the top authorities at the Pentagon added to delays.”

The U.S. military eventually agreed to use alternative methods at four sites, and the CWC states-parties agreed to extend the U.S. destruction deadline to 2023. After numerous construction delays, the Blue Grass neutralization facility was completed in 2015 and has been systematizing its destruction process over the past four years.

In addition to the Blue Grass facility, the only remaining U.S. chemical weapons stocks are at the Pueblo Chemical Depot in Colorado, where a neutralization and biotreatment process for eliminating 2,611 tons of mustard agent began in 2016.