“The Arms Control Association and all of the staff I've worked with over the years … have this ability to speak truth to power in a wide variety of venues.”
– Marylia Kelley
Tri-Valley Communities Against a Radioactive Environment
June 2, 2022
REMARKS: Making Progress in Inter-Korean Peace

During the 2018 Panmunjom Declaration and the Pyongyang Joint Declaration, President Moon and Chairman Kim agreed on complete denuclearization of the Korean Peninsula and the establishment of a permanent peace regime, alleviation of military tensions and practical mitigation of the risk of war, and a broad and groundbreaking development of inter-Korean relations. 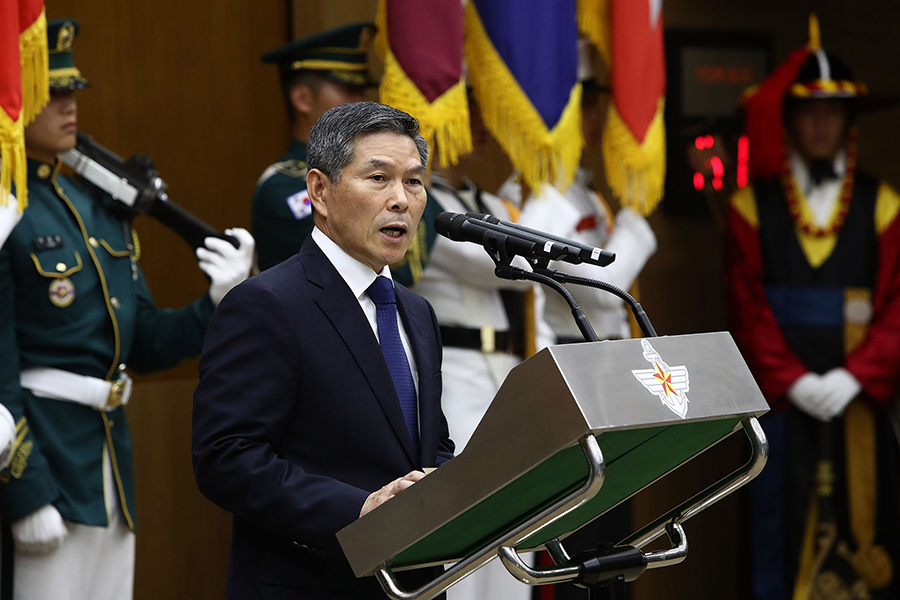 In fact, the U.S.-North Korean summit that took place right here in Singapore a year ago was a historical meeting where President Trump and Chairman Kim agreed on a complete denuclearization of the peninsula and the improvement of bilateral relations, as well as mutual cooperation for the peace of the Korean Peninsula and the world.

In order to hold on to this once-in-a-lifetime opportunity for denuclearization, it is important to continue maintaining the momentum of dialogue generated through the summit talks. A variety of measures must also be considered to provide North Korea with the assurance of a bright future of peace and prosperity.

Permanent peace on the Korean Peninsula, together with denuclearization, is only achievable when the 70-year-long fear and anxiety of war between South and North Korea is overcome and when military tension is alleviated and confidence is built.

Last September, the agreement of the implementation of the historic Panmunjom Declaration in the military domain, also known as the Comprehensive Military Agreement (CMA) was signed by the minister of national defense of the Republic of Korea and the minister of the People’s Armed Forces of North Korea in Pyongyang, serving us the first steps toward the establishment of permanent peace. The foundation of this agreement is comprised of the basic spirit of the 1953 armistice agreement in preventing armed confrontations in the peninsula, as well as the contents of previous inter-Korean agreements in the military domain. It includes practical matters to comprehensively halt acts of aggression toward each other.

The two Koreas have ceased military aggression in all domains including land, air, and sea since last November. The demilitarized zone (DMZ) is also undergoing actual demilitarization, transforming into a zone of peace. An agreement was reached to withdraw all guarded posts installed at key points within the DMZ.

In addition, the two Koreas have completed demilitarization measures, such as removing all firearms installed in joint guard posts in the Panmunjom Joint Security Area, an area known for its symbolic representation of the division of the peninsula.

Furthermore, in areas within the DMZ that includes territory from both Koreas, recovery of war remains has commenced for the first time since the division. This area has seen the deaths of countless young men and women in fierce battles between the two Koreas and many other participating nations, while access was restricted for all ever since the armistice agreement was signed in 1953. An inter-Korean agreement to jointly pursue recovery has brought newfound attention.

Furthermore, the Republic of Korea government has not stopped at just implementing the CMA, but also constructed open DMZ peace trails in the vicinity of the DMZ, creating opportunities to experience peace at the heart of the division. The reason that the CMA is set apart from past agreements is that rather than limiting ourselves to a declarative purpose, it makes tangible contributions for the alleviation of military tensions and confidence building between the two Koreas. This has allowed for a more stable management of inter-Korean military relations than ever before. Efforts will continue for a complete denuclearization and establishment of permanent peace on the Korean Peninsula through the meticulous implementation of the CMA, making sure that the heightened military tensions, crises, and friction of the past will not be repeated.

Adapted from a June 1 speech by South Korean Defense Minister Jeong Kyeong-doo at the 18th Asia Security Summit in Singapore organized by the International Institute for Strategic Studies.