May 2019
By Jeff Abramson and Greg Webb

The United States will drop out of the Arms Trade Treaty, the 2013 pact designed to regulate the international trade of conventional arms, President Donald Trump announced April 26. 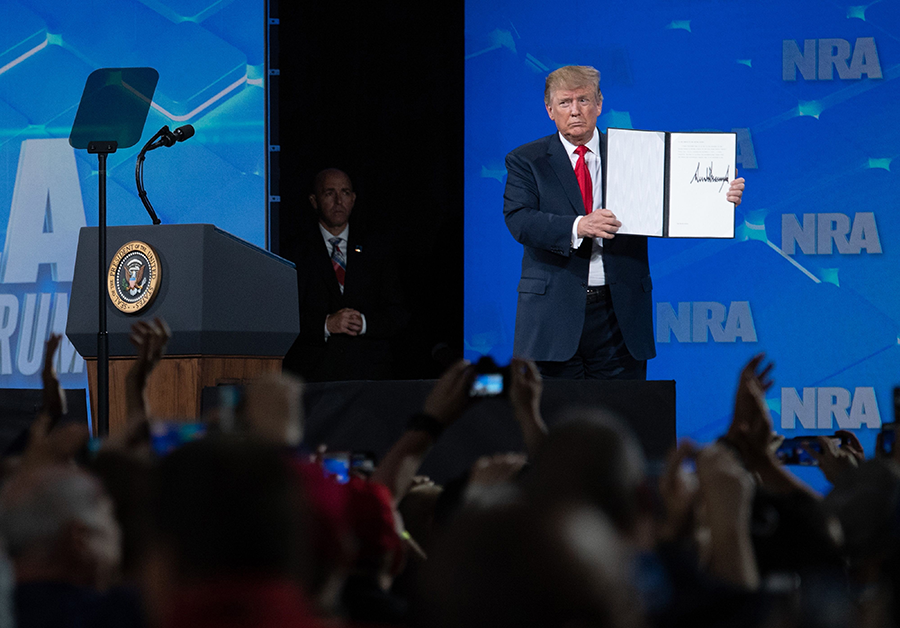 “The United States will be revoking the effect of America’s signature from this badly misguided agreement,” Trump told a large audience at the annual meeting of the National Rifle Association (NRA) in Indianapolis. “The United Nations will soon receive a formal notice that America is rejecting this treaty.”

U.S. Secretary of State John Kerry signed the pact in 2013, but the United States has not ratified it. On stage in Indianapolis, Trump signed a message to the U.S. Senate asking it to discontinue the treaty’s ratification process.

International and U.S. treaty supporters decried Trump’s decision. The pact is the third major arms-related agreement from which the United States has withdrawn since he took office in January 2017.

Latvian Ambassador Janis Karklins, who will preside over the upcoming August 26-30 conference of the treaty's states parties in Geneva, said, “I hope that the U.S. administration will reconsider its decision in the future.”

“This is yet another myopic decision that jeopardizes U.S. security based on false premises and fearmongering,” said Sen. Bob Menendez (D-N.J.), the ranking member of the Senate Foreign Relations Committee. He was echoed by House Foreign Affairs Committee Chairman Eliot Engel (D-N.Y.) who said, “It is abhorrent to use international diplomacy for blatant political pandering.”

Although popular today internationally, the treaty was not concluded easily. Measures to curb illegal and define responsible arms sales were discussed for decades, and a special treaty negotiating process failed in 2013 when Iran, North Korea, and Syria refused to join a consensus agreement. Instead, the pact was taken to the UN General Assembly days later and approved there against their “no” votes. It entered into force on Dec. 24, 2014. Today, the treaty has 101 states-parties and another 34 signatories that have not yet ratified.

The treaty is the first global accord to regulate a broad array of conventional weapons. It establishes common international standards that must be met before states authorize weapons transfers. The treaty generally seeks to reduce the illicit arms trade, reduce human suffering caused by illegal and irresponsible arms transfers, improve regional security and stability, and promote accountability and transparency by state-parties concerning transfers of conventional arms.

U.S. negotiators made clear during the treaty-making process that the pact would not threaten the right to bear arms afforded by the Second Amendment to the U.S. Constitution. It has no authority over national gun control laws.

Nevertheless, U.S. gun-rights organizations, led by the NRA, have alleged that the treaty would impose limits on U.S. domestic gun sales, and Trump repeated those claims in his NRA speech. “Under my administration, we will never surrender American sovereignty to anyone. We will never allow foreign bureaucrats to trample on your Second Amendment freedom.”

Such rhetoric was misplaced, according to Thomas Countryman, the lead U.S. negotiator of the treaty and now the chair of the Arms Control Association board. “The treaty, if ratified by the U.S. Senate, would not require the United States to change anything in its law or procedures,” he said. “The president's action today is yet another mistaken step that threatens to make the world less
safe rather than more secure.”