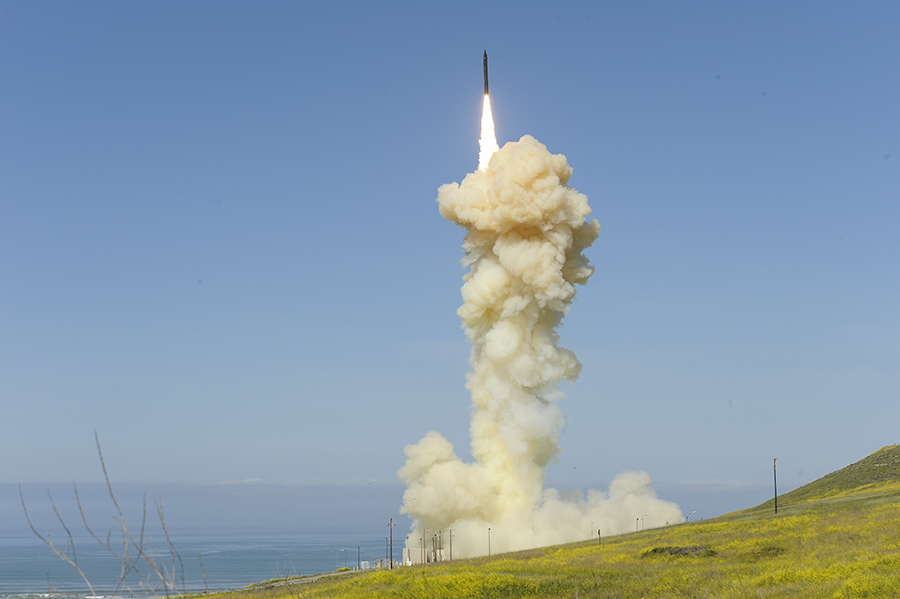 After launching a “threat representative” ICBM target from the Kwajalein Atoll, the agency dispatched two ground-based interceptors (GBIs) from Vandenberg Air Force Base, Calif., to destroy the target. It was the first time such a salvo engagement had been tried, and MDA Director Lt. Gen. Samuel Greaves called the test a “critical milestone.”

The two interceptors launched exoatmospheric kill vehicles (EKVs) to identify and destroy the mock warhead. The first EKV attacked the target. The second assessed the resulting debris field, determined that the initial target was no longer present, and then struck “the next ‘most lethal object’ it could identify,” an MDA press release reported.

The test was “the most complex, comprehensive, and operationally challenging test ever executed,” Greaves said in April 3 congressional testimony. The test’s success in assessing the debris field meant that “any concept of operations which seek[s] to confuse our missile defense system by launching junk or debris would not be successful. That’s why it was a success,” he added.

Congress first required a salvo test of the Ground-Based Midcourse Defense (GMD) system in 2001, passing legislation that said the “early stages of system development” should incorporate “events to demonstrate engagement of multiple targets, ‘shoot-look-shoot’, and other planned operational concepts.”

The March test was the 19th overall and the 11th reported as successful. The previous test was conducted May 30, 2017. (See ACT, July/August 2017.) The next test has not been announced.

The Union of Concerned Scientists has raised concerns that none of the previous GMD tests included “realistic decoys” or “other countermeasures that the system could be expected to face in a real attack,” according to a January 2019 report, which said that some of the tests included decoy balloons, which are easier for EKVs to distinguish from mock warheads or other objects because of their distinguishing characteristics. The May 2017 test included at least one decoy, but it is unclear whether the 2019 test used any decoys or other countermeasures designed to fool the kill vehicles.

The GMD system currently consists of 40 GBIs deployed at Fort Greely, Alaska, and four more at Vandenberg. In its 2019 Missile Defense Review, the Trump administration proposed raising the total number to 64 by 2023 by adding new GBIs at Fort Greely armed with the new Redesigned Kill Vehicle, which the review calls “more effective, reliable, and affordable.” Developmental delays, however, could slow the fielding of the new version to fiscal year 2025, according to recent budget request documents. (See ACT, April 2019.)