U.S. President Donald Trump and North Korean leader Kim Jong Un said in April that they are willing to participate in a third summit, but each imposed conditions on the meeting, raising doubt about the prospects for progress. 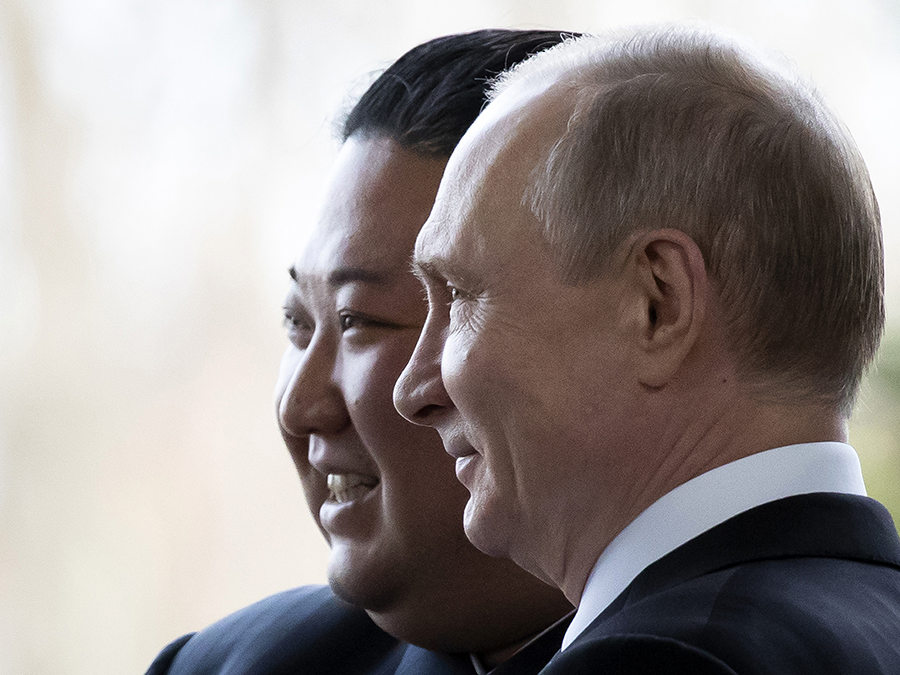 The Trump administration wants to see additional action from North Korea demonstrating its commitment to denuclearization, while Kim said Pyongyang will abandon the negotiations at the end of this year if the United States does not take a more flexible approach. It is unclear how the two sides will resolve this standoff over the process to advance talks.

The U.S. and North Korean negotiating teams have not met since the second summit between Trump and Kim in Hanoi ended abruptly on Feb. 28 without any progress on the goals of denuclearization and peace-building on the Korean peninsula. (See ACT, March 2019.)

Meanwhile, Kim met with Russian President Vladimir Putin on April 25 in Vladivostok. It was their first summit meeting. Putin told reporters afterward that he discussed denuclearization with Kim, but said North Korea “needs guarantees of its security and sovereignty” in return.

Putin said multilateral talks may be an option to develop “internationals security guarantees for North Korea,” and he said he would convey to Washington Kim’s position on future negotiations with the United States.

Trump, speaking to reporters during his April 11 summit with South Korean President Moon Jae-in, said he would be willing to meet Kim again and expressed his belief that “tremendous things will happen” with North Korea, but it is “not going to go fast.”

U.S. National Security Advisor John Bolton said on April 17 that Washington is looking for a “real indication from North Korea that they’ve made the strategic decision to give up nuclear weapons” and that Trump would be willing to participate in a third summit only if he can get a “real deal.” Bolton described a real deal as a “big deal,” likely referring to the more comprehensive agreement outlining the end state of negotiations that Trump sought in Hanoi. (See ACT, April 2019.)

In April 12 remarks to the North Korean Supreme People’s Assembly, Kim said that he is willing to try “one more time” if Washington proposes a third summit, but the United States must have the “right stance,” likely referring to the Trump administration’s preference to pursue a more comprehensive deal and its unwillingness to offer relief from economic sanctions earlier in the process.

Kim was clearly seeking relief from UN sanctions targeting North Korea’s economy during the Hanoi summit, but he told the assembly that the United States is miscalculating if it believes North Korea can be pressured into submission. North Korea “will no longer obsess over lifting sanctions” and will open the path to economic prosperity through our own means,” Kim said.

Pyongyang has repeatedly rejected pursing a big deal and indicated its preference for an incremental approach. In his April 12 remarks, Kim criticized the Trump administration’s “methodology” for pursuing negotiations.

He called for the United States to “lay down unilateral requirements and seek constructive solutions,” saying that the United States has until the end of the year to change its negotiating approach or the “prospects for solving a problem will be bleak and very dangerous.” He did not specify what if any actions North Korea would take if its deadline was not met.

Trump said on April 11 that the United States is still focused on the big deal with North Korea, but he did not rule out a step-by-step approach to negotiations, saying there are “various small deals that could happen.”

Trump continues to rule out economic sanctions relief early in the process. He said on April 11 that sanctions will “remain in place” until denuclearization is complete but that he would not impose new measures at this time.

At the April 11 press conference, Trump said that he would support joint economic projects between the two Koreas at the right time but that now is not that time. He did say the United States is discussing “certain humanitarian things” and the United States is supportive of South Korean food aid for North Korea.

Moon is seeking a fourth summit with Kim. He said on April 15 that it was time to “begin the preparations in earnest” for the next meeting and that he hopes to hold “detailed and substantive talks on how to achieve further progress that goes beyond the previous two summits” between Trump and Kim.

Kim, however, has criticized Moon for attempting to act as a “mediator” between Pyongyang and Washington. He said on April 12 that Moon should “subordinate everything to the improvement of North-South ties.”

Commentary in North Korean media outlets has also criticized South Korea for “succumbing to the pressure” of the United States and failing to move forward on economic projects designed to promote integration between North and South Korea.

North Korea also criticized the composition of the U.S. negotiating team, with the foreign ministry calling for U.S. Secretary of State Mike Pompeo to step aside as head of delegation. In an April 18 statement, Kwon Jong Gun, head of the ministry’s Department of American Affairs, said that “talks will become entangled” if Pompeo is involved in future rounds of negotiations. He called Pompeo “reckless” and said North Korea would prefer a “person who is more careful and mature in communicating with us.”

In what may have been an attempt to demonstrate limited patience with the negotiating process and put pressure on the Trump administration, Pyongyang tested what it called a new tactical weapon on April 17. North Korea did not provide specific details about the weapon, but it appeared to be an artillery system with a conventional warhead. Such a weapon would not break Kim’s voluntary moratorium on long-range ballistic missile testing announced in April 2018.

Kim was present at the test, and the state-run Korean Central News Agency said Kim described the weapon as “increasing the combat power” of the army.