The International Atomic Energy Agency (IAEA) reportedly inspected a warehouse in Tehran that Israeli Prime Minister Benjamin Netanyahu alleges was used to store documents and materials related to Iran’s past nuclear weapons program. News reports did not specify exactly when the inspection took place, but one official said inspectors visited the site in March, according to a Reuters article. 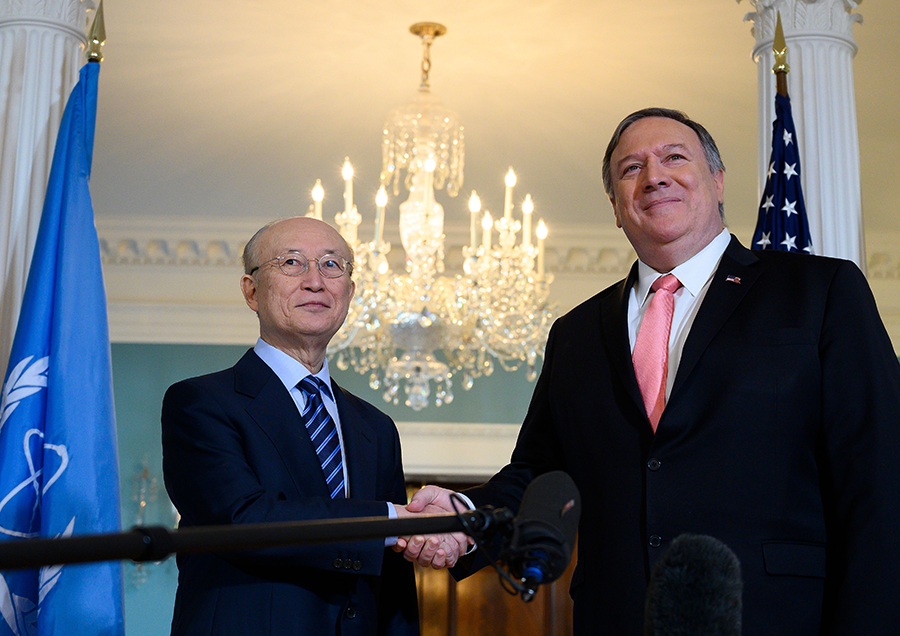 Netanyahu revealed the location of the warehouse during his speech at the UN General Assembly in September and said it was used for “storing massive amounts of equipment and material for Iran’s secret nuclear weapons program,” including 15 kilograms of radioactive material that had recently been removed from the building. Netanyahu called on IAEA Director-General Yukiya Amano to “do the right thing” and send inspectors to visit the site “immediately.”

The IAEA typically does not comment on inspections and has not confirmed that a visit to the warehouse took place, but Amano said on April 3 that the agency had not seen any activities taking place “contrary to the Iran nuclear deal.”

Netanyahu did not specify what type of radioactive material was removed from the warehouse. To comply with its nuclear Nonproliferation Treaty commitments, Iran is required to declare certain nuclear materials, primarily uranium and plutonium, to the IAEA. There are no restrictions on other types of radioactive material, such as cobalt and radium.

The diplomats quoted in the Reuters article said the IAEA collected environmental samples to test for the presence of nuclear materials, but those results may not be fully analyzed until June.

Netanyahu has also been pushing the IAEA to follow up on archival materials documenting Iran’s past nuclear weapons-related work that Israel stole from Iran in January 2018. (See ACT, May 2018.) Netanyahu has argued that the archive’s existence is evidence that Iran is still seeking to develop nuclear weapons.

Without naming Israel, Amano has spoken out against efforts by states to influence IAEA monitoring and verification activities. He said on April 5 that states “should not intervene in our work of safeguards implementation.” He emphasized that IAEA work depends on its independence and said that “if attempts are made to micromanage or put pressure on the agency in implementing nuclear verification, that would be counterproductive and extremely harmful.”

Behrouz Kamalvandi, spokesman for the Atomic Energy Organization of Iran (AEOI), described Netanyahu’s efforts to pressure the IAEA to further investigate as “futile.” He said on April 9 that the IAEA’s investigation into Iran’s past activities is closed “legally and politically.”

Iran was not required to destroy archives detailing its past nuclear weapons-related work as part of the 2015 multilateral nuclear deal, known as the Joint Comprehensive Plan of Action (JCPOA). The deal does commit Iran to address concerns raised by the IAEA about the military dimensions of its nuclear program prior to receiving U.S., EU, and UN sanctions relief.

In a December 2015 report assessing the material provided by Iran, the IAEA concluded that Tehran had an organized nuclear weapons development program until 2003 and continued some activities intermittently through 2009, but there were no indications of nuclear weapons-related work after that point. (See ACT, January/February 2016.)

U.S. intelligence assessments reached a similar conclusion, and in the 2019 Worldwide Threat Assessment, Director of National Intelligence Dan Coats assessed that “Iran is not currently undertaking the key nuclear weapons-development activities we judge necessary to produce a nuclear device.”

Meanwhile, Iran has continued nuclear research and development allowed by the JCPOA. During the celebration of National Nuclear Day on April 9, Iranian President Hassan Rouhani drew attention to the country’s nuclear achievements and announced the installation of 20 advanced IR-6 centrifuges at its Natanz facility.

Iran is permitted to enrich uranium using only up to 5,060 of its first-generation IR-1 centrifuge machines under the nuclear deal, but Tehran can test limited numbers of advanced centrifuges based on the terms of the JCPOA and a more specific research and development plan submitted to the IAEA that is not public.

The nuclear deal states that Iran can test limited numbers of IR-6 centrifuges in small and intermediate cascades, but does not provide specific numbers until eight and a half years after implementation of the deal, at which point Iran can test 30 machines in a cascade. Iran is allowed to introduce uranium into the cascades, but cannot withdraw any enriched material.

A European official from one of the states party to the nuclear deal told Arms Control Today on April 12 that if Iran follows through on Rouhani’s announcement, “it would not appear” to violate the terms of the nuclear deal.