The head of the international organization charged with monitoring Iran’s compliance with the 2015 nuclear deal said Iran is meeting its obligations under the accord and warned against states trying to influence verification activities. Less than three weeks later, the United States imposed sanctions against Iranian officials and institutions that Washington alleges are working to retain nuclear weapons-related expertise in Iran. 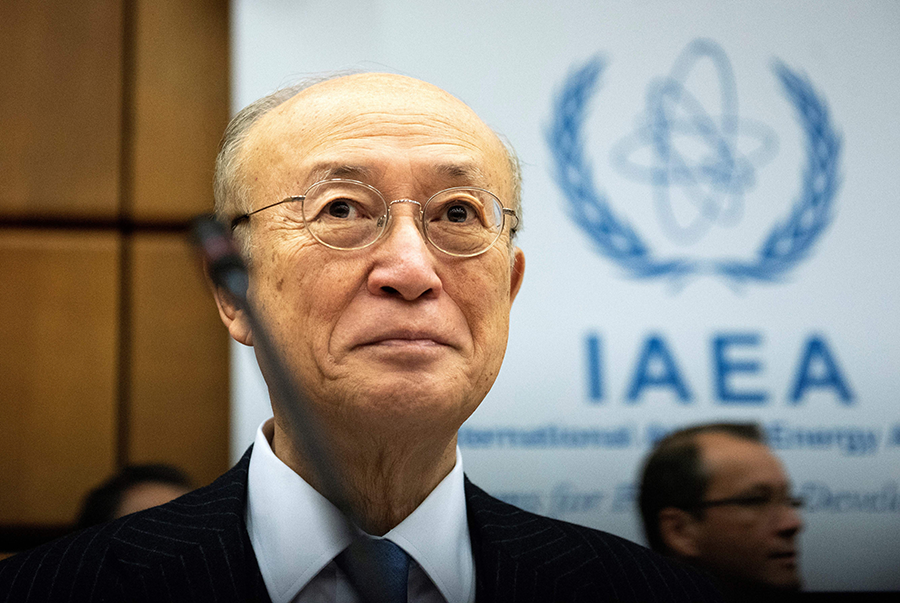 “Iran is implementing its nuclear commitments,” said Yukiya Amano, director-general of the International Atomic Energy Agency (IAEA), in March 4 remarks to the agency’s Board of Governors. Amano urged Tehran to continue adhering to the deal, known as the Joint Comprehensive Plan of Action (JCPOA).

The United States, which withdrew from the agreement in 2018, levied new sanctions on March 22 against Iran’s Organization of Defensive Innovation and Research, purported to employ staff from Iran’s past nuclear weapons research activities.

“This is a way for them to keep the gang together, as it were, and to provide a reconstitution capability for that weapons program,” said a senior administration official briefing the media March 22. The sanctions impose travel and commercial restrictions on 14 individuals and 17 entities.

The IAEA quarterly report on Iran’s nuclear program, released publicly just days after Amano’s statement, contains additional details demonstrating that Iran is abiding by the deal’s terms. It notes that Iran’s stockpile of enriched uranium is below the 300-kilogram cap set by the JCPOA and that Iran has not enriched uranium above the limit of 3.67 percent uranium-235, far below the 90 percent level considered useful for weapons purposes.

The report notes that the agency has had access to “all the sites and locations in Iran which it needed to visit.”

Amano also continued to defend the importance of the IAEA’s independence in evaluating information related to its efforts to monitor peaceful nuclear activities. He emphasized that the IAEA “undertakes analysis and takes action in an impartial, independent, and objective manner.”

Amano’s March 4 statement is not the first time that he has pushed back against attempts by some nations to direct the agency’s verification work. “If attempts are made to micromanage or put pressure on the agency in nuclear verification, that is counterproductive and extremely harmful,” he said, adding that “independent, impartial, and factual safeguards implementation is essential to maintain our credibility.”

Although Amano did not identify specific states, Israeli officials have called on the IAEA to visit undeclared sites in Iran and follow up on materials that Israel stole from an Iranian archive in January 2018 and shared with the agency later in the year. In September at the UN General Assembly, Israeli Prime Minister Benjamin Netanyahu specifically called on the IAEA to visit a site identified by Israeli intelligence as housing materials and documents related to Iran’s past nuclear weapons program. (See ACT, October 2018.)

Despite reports of the United States promising Israel that it would pressure the IAEA to follow up on the archival material, Jackie Wolcott, U.S. representative to the IAEA, appeared to defend the agency’s process during her March 5 remarks to the IAEA board. Wolcott said Iran must address questions raised by the archival material, but emphasized that the United States supports the “IAEA’s continued, careful assessment of the nuclear archive materials.” She said Washington has the “highest confidence that the agency will independently and professionally review these materials, in combination with all other available information, to appropriately inform its monitoring and verification activities in Iran.”

Kazem Gharibabadi, Iran’s permanent representative to the IAEA, said on March 8 that, “despite the many efforts of certain enemies” to “divert the attention of the IAEA,” cooperation between the agency and Iran is “constructive.”

The Trump administration’s fiscal year 2020 budget request includes $106 million to meet the U.S. assessed contribution to the IAEA, down slightly from the $111 million request in fiscal year 2019, but more than the $103 million appropriated last year. The budget request also includes $88 million in voluntary contributions to the IAEA, similar to requests over the past several years.

Although Iran continues to abide by the nuclear agreement, Gharibabadi emphasized that the remaining parties to the deal—China, France, Germany, Russia, the United Kingdom, and the European Union—“must ensure Iran’s enjoyment of JCPOA-related benefits by adopting appropriate measures.”

Those parties to the deal have taken some steps to preserve trade with Iran after the United States reimposed sanctions in May 2018. These efforts, however, have provided few tangible benefits to date.

France, Germany, and the UK announced in February the creation of a financial mechanism to facilitate trade, known as the Instrument in Support of Trade Exchanges (INSTEX), that will initially focus on humanitarian goods exempt from U.S. sanctions. (See ACT, March 2019.)

Per Fischer, the German official heading INSTEX, visited Iran in early March to discuss the mechanism. Following his visit, Iranian officials said on March 19 that Tehran set up a counterpart to INSTEX, the Special Trade and Finance Institute, which should allow the trade mechanism to become operational.

Iran does not appear to be expecting much economic benefit from INSTEX. Bahram Qassemi, spokesman for the Iranian Foreign Ministry, said on March 19 that Iran does not expect the new mechanism to work “miracles” and will continue to pursue avenues of trade with other countries. He said that could include trade with China, Turkey, India, and Russia in their national currencies, bypassing the U.S. financial system.