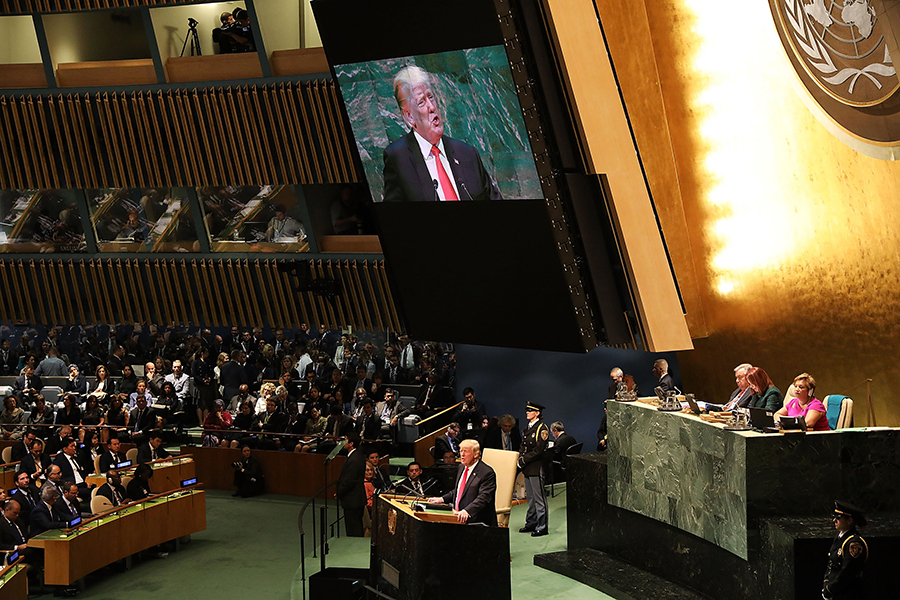 Nearly five months after Trump unilaterally withdrew from the 2015 accord, Iran continues to comply with restrictions on its nuclear activities as the European Union, Germany, France, and the United Kingdom seek work-arounds to renewed U.S. sanctions on the Islamic republic.

Iranian President Hassan Rouhani wrote in a Sept. 23 column in The Washington Post that he is allowing a “short grace period” to see what the other parties to the accord, including Russia and China, are able to do to offset Trump’s pressure tactics, notably U.S. efforts to prevent Iranian oil sales. U.S. officials are pressuring states that import Iranian oil to cut purchases or face severe sanctions that will enter back into effect Nov. 5.

The other parties to the nuclear deal met at the United Nations on Sept. 24, the eve of Trump’s second General Assembly address, to assess what they called “practical proposals” to offset U.S. actions and to protect “legitimate business” dealings with Iran. Afterward, EU foreign policy chief Federica Mogherini, speaking alongside Iranian Foreign Minister Mohammad Javad Zarif, said the parties agreed to establish a “special purpose vehicle” to facilitate purchases of Iranian imports and exports, including oil.

“In practical terms, this will mean that EU member states will set up a legal entity to facilitate legitimate financial transactions with Iran, and this will allow European companies to continue to trade with Iran in accordance with European Union law,” she said. “And it will be open to other partners in the world.”

This puts the countries, including close U.S. allies, in direct defiance of Trump, who told the General Assembly on Sept. 25 that the United States will increase its “campaign of economic pressure” on Tehran. U.S. Secretary of State Mike Pompeo and John Bolton, Trump’s national security adviser, warned allies and others against trying to evade sanctions.

Bolton characterized the European plan as just rhetoric and suggested any such action would have consequences. “We do not intend to have our sanctions evaded by Europe or by anyone else,” he said in a speech Sept. 25 detailing the administration’s redlines for Iranian leaders.

Trump, at the UN, said the oil-related sanctions will be followed by other punitive measures to thwart what he characterized as a “corrupt dictatorship” that still harbors nuclear weapons ambitions and foments turmoil in the Middle East through its support of militant groups.

“We ask all nations to isolate Iran’s regime as long as its aggression continues,” he said. Further, using language linked to potential regime change, he said, “[W]e ask all nations to support Iran’s people as they struggle to reclaim their religious and righteous destiny.”

But it is the United States that appears isolated. At a special UN Security Council session chaired by Trump Sept. 26, called to highlight nonproliferation priorities, top leaders one after the other directly criticized his decision to abandon the Iran deal and urged Tehran to continue to comply with the accord.

The Trump administration, which denies an overt goal of regime change, has said it is seeking to force Iran to negotiate a more wide-ranging deal that includes restraints on its regional interference and ballistic missile program and tighter restrictions on nuclear activities. 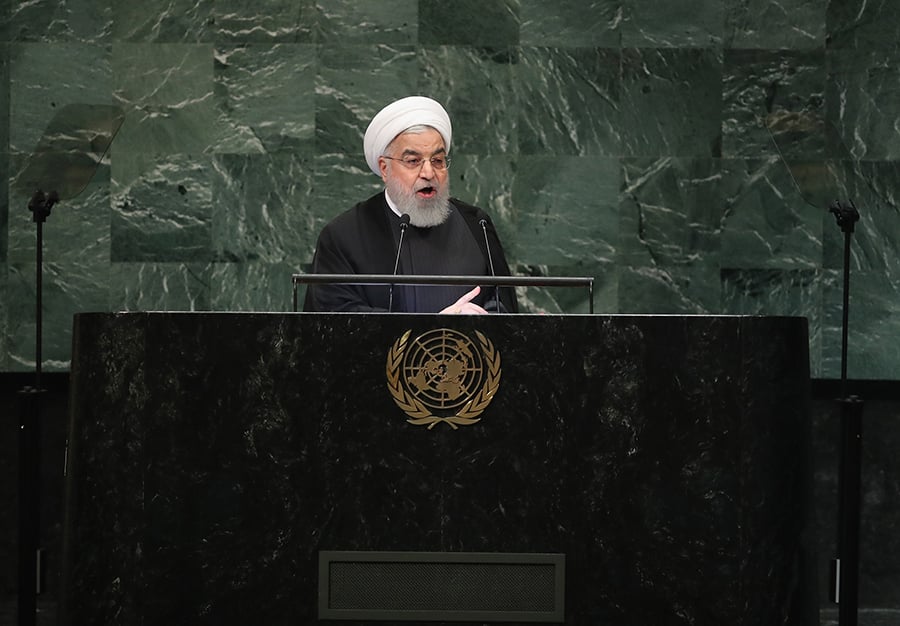 Iran has ruled out such talks, at least until the United States returns to the nuclear accord negotiated during the Obama administration. Trump’s offer of direct talks “is not honest or genuine” given his actions, Rouhani said in his column. Rouhani told the UN General Assembly on Sept. 25 that beginning a dialogue starts with ending threats and unjust sanctions.

The Europeans have been particularly determined to try to preserve the 2015 pact because it has effectively halted Iran’s nuclear advances and reopened a lucrative market for European trade and because they are alarmed by a drift toward an imaginable U.S. war with Iran, encouraged by Saudi Arabia and Israel. It is unclear whether their new initiatives to shield companies from U.S. sanctions will have much effect, with major European companies already abandoning Iran.

More important may be what actions Iran’s biggest oil purchasers, China and India, take in light of the U.S. sanctions. Both have substantially reduced oil purchases, although it is uncertain what Beijing may decide in light of growing trade disputes with the Trump administration.

Iran agreed to the nuclear deal in return for the lifting of U.S., EU, and UN sanctions, hoping for a boost to the country’s struggling economy. In the face of rising tensions with the Trump administration and internal mismanagement of the economy, the value of the Iranian currency has plummeted by as much as 70 percent in the past year, fueling protests against Rouhani’s government.

Iranian officials have said they could restart nuclear activities, such as enriching uranium at prohibited levels, within days if there is a decision to do so. An Iranian decision to exit the nuclear deal might play well for anti-U.S. sentiment, but would pose a different set of risks for the regime.

Iran has continued to abide by the terms of the nuclear agreement, according to an International Atomic Energy Agency (IAEA) report on Aug. 20, the first since the United States began reimposing sanctions Aug. 7. The report also said Iran is abiding by the deal’s more intrusive IAEA monitoring and verification mechanisms, which provide inspector access “to all the sites and locations” necessary to visit.

The IAEA reports do not contain any details on what sites the agency visits outside of Iran’s declared nuclear program, but there are some indications that inspections took place at two universities in Iran in July. According to several news outlets, protests broke out over the IAEA presence.

The report does not mention a reported new advanced-centrifuge production facility. The official Iranian news agency IRNA on Sept. 9 quoted Ali Akbar Salehi, head of the Atomic Energy Organization of Iran, as saying that the facility is “fully complete and set up.” The construction of such a facility does not violate the deal, but it would be a violation if Tehran manufactured centrifuges outside of the narrow scope of production permitted by the accord.

The IAEA report also does not mention the stolen trove of secret Iranian documents, which Israel disclosed earlier this year, relating to Iran’s past nuclear weapons activities. But Nicole Shampaine, a U.S. official at the U.S. Mission in Vienna, told the IAEA Board of Governors Sept. 12 that the United States supports the “IAEA’s careful assessment of the newly acquired archive materials from Iran’s past nuclear weapons program. She said the existence of the documentation demonstrates that Iran “sought to preserve the information and expertise from that past program.”