“Over the past 50 years, ACA has contributed to bridging diversity, equity, inclusion and that's by ensuring that women of color are elevated in this space.”
– Shalonda Spencer
Women of Color Advancing Peace, Security, and Conflict Transformation
June 2, 2022
CTBT Grows Amid Calls on N. Korea to Join

The Comprehensive Test Ban Treaty (CTBT) has gained some renewed attention as nations called on North Korea to join the treaty as a way to demonstrate its sincerity in declaring an end to its nuclear testing. 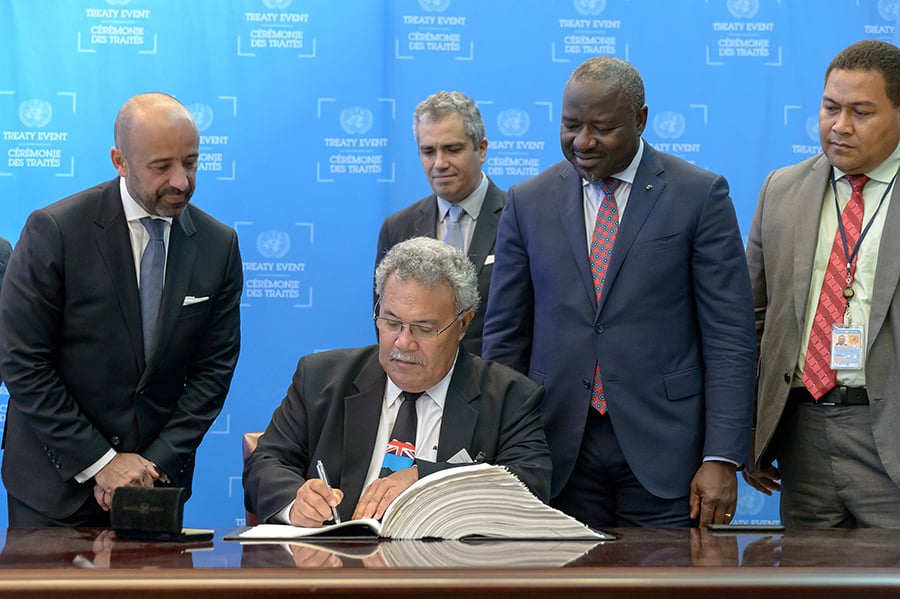 Meanwhile, Thailand became the 167th country to ratify the CTBT. With the Sept. 25 signature by the island nation of Tuvalu, the number of signatories was brought to 184. But the treaty will not enter into force until it is ratified by the eight remaining nations listed in its Annex 2: China, Egypt, India, Iran, Israel, Pakistan, North Korea, and the United States.

At a ministerial-level meeting of the “Friends of the CTBT” states Sept. 27, the foreign ministers of Australia and Japan, who co-chaired the meeting, and of Belgium, Finland, Iraq, Japan, and the Netherlands called on North Korea to ratify the CTBT.

The meeting reinforced a message sent to North Korea in June by the foreign ministers of Belgium and Iraq urging a “legally binding and irreversible end” to its nuclear testing, such as through the signature and ratification of the CTBT, as part of a denuclearization agreement. Belgium and Iraq are co-presidents of the 2017 Article XIV Conference on Facilitating the Entry Into Force of the CTBT and will continue in this role until the next Article XIV conference in 2019.

EU foreign affairs chief Federica Mogherini reaffirmed this sentiment in remarks at the meeting, urging North Korea to join the CTBT “without delay.” She noted that verifying the closure of the North Korean nuclear test site “could benefit” from the technical assistance of Comprehensive Test Ban Treaty Organization (CTBTO).

There has not been much public discussion about what the technical verification of the dismantlement of North Korea’s nuclear test site would look like, and questions remain about the roles of the CTBTO and the International Atomic Energy Agency (IAEA) in such a process. At a Sept. 6 UN event marking the International Day Against Nuclear Tests, CTBTO Executive Secretary Lassina Zerbo said that the organization is ready, if called upon, “to contribute to the process of verifiable denuclearization.”

Miroslav Lajčák, president of the UN General Assembly and Slovakia’s foreign minister, at the Sept. 6 event noted that North Korea’s decisions to suspend nuclear and missile tests were positive steps. Still, he said that signing and ratifying the CTBT “would lead to progress on the Korean peninsula.”