“It will take all of us working together – government officials, and diplomats, academic experts, and scientists, activists, and organizers – to come up with new and innovative approaches to strengthen transparency and predictability, reduce risk, and forge the next generation of arms control agreements.”
– Wendy Sherman
U.S. Deputy Secretary of State
June 2, 2022
Cluster Munitions Ban Marks Progress

Delegates of states-parties to the Convention on Cluster Munitions, meeting Sept. 3–5 in Geneva, once again condemned any use of the weapons and celebrated successes in the decade since the treaty opened for signature. 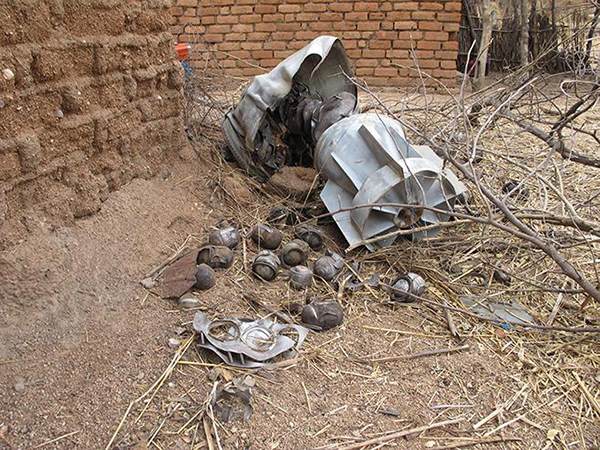 The annual meeting ended a half day early without controversy as states welcomed the March accession of Sri Lanka and Aug. 31 ratification by Namibia, which will become the 104th state-party when the treaty enters into force for it in February. Conference President Carlos Morales Dávila, Nicaragua’s deputy permanent representative to the UN and other international organizations in Geneva, also congratulated Croatia, Cuba, Slovenia, and Spain for reporting completion of the destruction of their cluster munition stockpiles.

Research published by the Landmine and Cluster Munition Monitor program before the meeting found that 99 percent of stocks declared by states-parties had already been destroyed, a collective total of 1.4 million cluster munitions and more than 177 million submunitions. Under the treaty, states have eight years to destroy their cluster munitions. Thus far, no state has missed its deadline.

As it documented beginning in 2012, the program reported ongoing use of cluster munitions by the Syrian government. Fewer incidents were confirmed in 2018, however, likely a result of difficulty in obtaining information and a change in the Syrian civil war as governmental forces recaptured more territory. Fewer casualties from such munitions were cited, with 187 recorded in 2017 in Syria, down from 860 in 2016, although the report said the total was certainly higher “as available data does not capture all the casualties that occurred.”

The report also identified cluster munitions use in Yemen during the latter half of 2017 by the Saudi Arabia-led coalition fighting the Houthi, with such use beginning in 2015. None of the countries involved in the use of cluster munitions in that conflict are parties to the treaty.

As in prior years, states-parties adopted a final report that “condemned any use by any actor” of cluster munitions.

In a video message, Izumi Nakamitsu, UN high representative for disarmament affairs, called the convention an example of “disarmament that saves lives.” She said that the treaty has “had a concrete impact on the ground,” lauding stockpile destruction efforts and progress on clearance of contaminated land. According to the Landmine and Cluster Munition Monitor, at least 93 square kilometers of contaminated land were cleared in 2017 and at least 153,000 submunitions destroyed, an increase of 6 percent and 9 percent, respectively, from 2016.

More than a dozen nonsignatories to the treaty attended the meeting, but the United States continued its approach of not attending. Although it is the world’s largest financial contributor to land clearance efforts, Washington insists that cluster munitions remain relevant military tools. In November 2017, the United States altered a policy that was to take effect at the end of this year barring the use of cluster munitions that result in a more than 1 percent unexploded ordnance rate. (See ACT, January/February 2018.)

Next year’s meeting of states-parties is planned for Sept. 2–4 in Geneva, to be led by Aliyar Lebbe Abdul Azeez, Sri Lankan ambassador to the UN Office and other international organizations in Geneva. In 2020, Sabrina Dallafior Matter, the Swiss ambassador to the Conference on Disarmament, will preside over the treaty’s second review conference.