The historic Singapore summit between U.S. President Donald Trump and North Korean leader Kim Jong Un may have emphasized pageantry over substance, but the document both leaders signed could start a serious negotiating process on eliminating Pyongyang’s nuclear weapons. 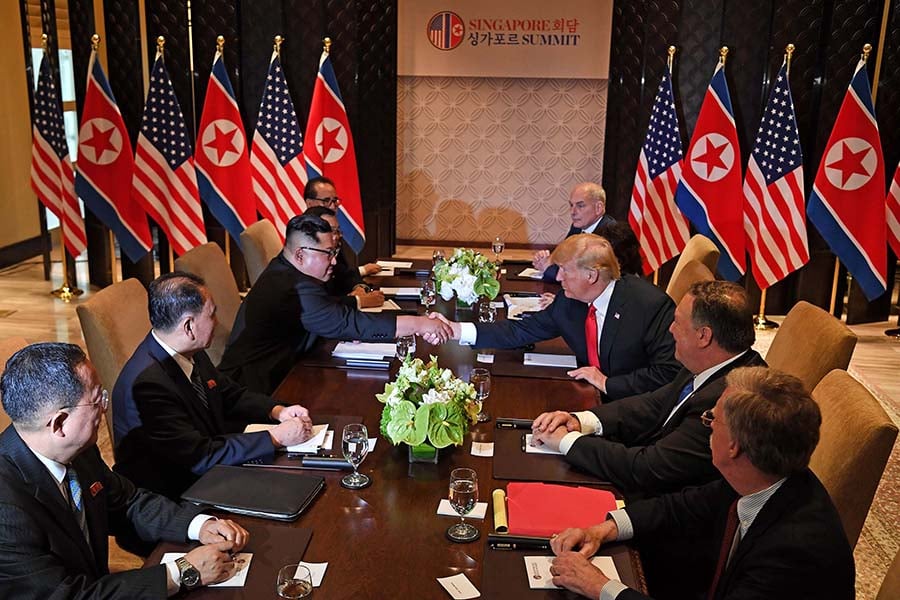 Their June 12 joint statement committed North Korea to the “complete denuclearization of the Korean peninsula” and both countries to hold follow-on negotiations at the “earliest possible date” to implement the leaders’ understandings.

Upon his return to Washington on June 13, Trump claimed to have achieved his goal, tweeting misleadingly that “there is no longer a nuclear threat from North Korea." The reassurance was premature at best, given that the summit statement did not commit Kim to take any specific steps to halt his nuclear weapons program. Negotiations on what comes next are bound to be difficult, and the history of failed agreements (see box) will weigh on the talks.

Still, by talking rather than threatening, Trump and Kim have stepped back from what seemed to be an accelerating slide toward a conflict with the risk of nuclear weapons use in 2017. Kim, one of the world’s most isolated leaders, bolstered his standing by attaining a one-on-one meeting with a U.S. president. It remains to be seen if the meeting created the necessary political momentum to begin a negotiating process or if it sends the wrong message about leveraging illicit nuclear activities for political gain. Iran, for one, may note the disparity in U.S. treatment.

The U.S. negotiators, led by Secretary of State Mike Pompeo, must try to convert the declared understandings into detailed commitments and then into actions leading to North Korea's complete and verifiable nuclear disarmament—the very goal that has eluded negotiators in the past. How this goes in the coming weeks, months, and perhaps years—not the day-after celebratory tweets from the U.S. president—will determine whether the meeting was a historic turning point or another diplomatic disappointment.

Going into the summit, North Korea and the United States had different expectations about what denuclearization entails. (See ACT, May 2018.) The reference to “denuclearization of the Korean peninsula” does not appear to have resolved those differences, and gaps are already discernable between the two countries’ interpretations of the summit commitments.

Before the summit, Pompeo told reporters in Singapore that the “complete and verifiable and irreversible denuclearization of the Korean peninsula is the only outcome that the United States will accept.”

When pressed by reporters after the summit on why there was no inclusion of the word “verification” in the summit document, Pompeo said that verification was understood as part of “complete denuclearization of the Korean peninsula.” A June 13 statement on the summit published by the state-run Korean Central News Agency (KCNA) did not mention verification.

Differences in interpretation have plagued U.S. negotiations with North Korea in the past. Most recently, a February 2012 moratorium on long-range missile tests collapsed when North Korea conducted a satellite launch in April of that year. Satellite launch vehicles were not expressly mentioned in the so-called Leap Day deal; the United States said it was understood that such launches were also prohibited, whereas North Korea said they were permitted. (See ACT, May 2012.)

The KCNA statement said that the two leaders agreed “it is important to abide by the principle of step-by-step and simultaneous action” to achieve peace, stability, and denuclearization.

John Bolton, Trump's national security adviser, said June 20 in an interview with Fox News that all sanctions will remain in force until there is evidence of North Korean denuclearization.

It may be difficult for the United States to retain sanctions pressure, given the steps Kim has taken to halt nuclear weapons and certain missile tests and to engage in negotiations with the United States and South Korea.

In follow-up negotiations, Pompeo will need to clarify with his North Korean counterparts the expectations for denuclearization or run the risk that Pyongyang may exploit any ambiguity in the future.

Despite differences over scope and sequencing, the summit may yield concrete results. Kim is more likely to take verifiable steps to halt and roll back his nuclear and ballistic missile programs if there is a fundamental shift in U.S.-North Korean relations, and despite the insults Kim and Trump traded last year, the two leaders seem to have developed a personal chemistry.

North Korea has long stated that its nuclear weapons are a deterrent against “U.S. hostile policy” toward the country. The KCNA statement on June 13 said that if the United States is willing to take “genuine measures to improving trust” between the two countries, North Korea will take commensurate steps. The statement also said the two countries should commit to refrain from “antagonizing” one another and noted that Trump and Kim have “deepening friendly feelings.”

Trump’s expressions of admiration for Kim, despite myriad human rights abuses, and his announcement at the June 12 summit news conference that the United States would suspend joint “war games” with South Korea may demonstrate that Washington is willing to take steps to respond to North Korea’s security concerns.

Trump’s decision to suspend all military exercises and his adoption of Pyongyang’s term of “war games” to describe the drills caught many off guard, including South Korean President Moon Jae-in and U.S. military forces in Korea. South Korea later agreed to suspend the planned exercises in August.

Pompeo had acknowledged in his June 11 news conference that addressing North Korea’s security concerns and steps on denuclearization must go hand in hand, but did not indicate that Trump was putting a suspension of exercises on the table during the summit.

Trump did say that the United States would resume military exercises if negotiations with North Korea fail to make progress. He did not indicate if the continued suspension was tied to a continuation of North Korea’s voluntary pledge in April to halt long-range ballistic missile and nuclear weapons tests.

As the dominant regional power, China is playing an important, if unclear, role. Kim met with Chinese President Xi Jinping twice in the lead-up to the summit and again on June 19. Chinese Foreign Minister Wang Yi said on June 12 that the Trump-Kim summit has “important and positive meaning.”