Republicans on a key House committee are ratcheting up their campaign to cripple the Open Skies Treaty despite protests from the Pentagon and U.S. allies that such a move would benefit Russia. 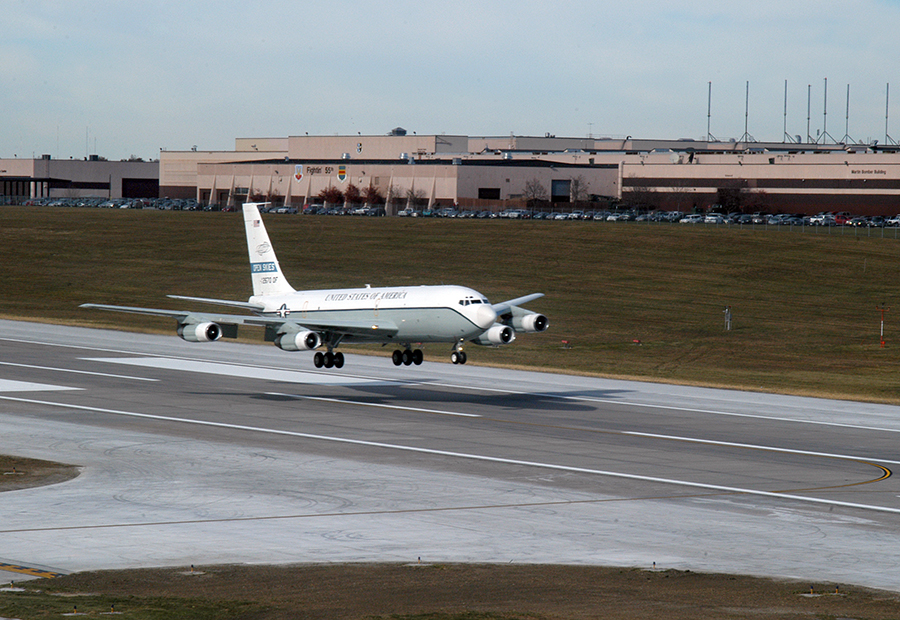 The House Armed Services Committee proposed in May to block the Air Force’s request to replace the aircraft that the United States uses to conduct treaty flights, including over Russia. But in a letter to Sen. Deb Fischer (R-Neb.), the top Republican on the Senate Armed Services strategic forces subcommittee, Defense Secretary Jim Mattis said that, despite Russian violations of the treaty, “it is in our nation’s best interest to remain a party” to the pact.

“In order to maximize U.S. benefits from the Treaty, the United States needs to recapitalize and modernize its sensors and aircraft,” Mattis added. “The 1960s-era U.S. Open Skies aircraft are ill-suited to extreme operating environments in Russia and experience regular, unplanned maintenance issues, often resulting in mission delays or cancellations.”

The Treaty on Open Skies, which entered into force in 2002 and has 34 states-parties, aims to increase confidence in and transparency of military activities, particularly in Europe, by allowing unarmed aerial surveillance flights over the entire territory of its participants for information-gathering purposes. The parties have equal yearly quotas of overflights and must make the information they acquire available to
all treaty parties.

The treaty permits up to 42 overflights of Russia by states-parties, of which 16 can be flown by the United States.

Washington for several years has raised numerous concerns about Russian compliance with the pact. The State Department’s annual compliance report released in April determined that Russia is violating the treaty by restricting observation flights over Kaliningrad, which is a sensitive Russian enclave between Poland and Lithuania, to no more than 500 km, and within a 10-kilometer corridor along Russia’s border with the Georgian border-conflict regions of South Ossetia and Abkhazia.

In response, the United States has placed restrictions on some of Russia’s treaty flights.

Separate from the compliance concerns, treaty critics in Congress argue the Russia’s flights, which now employ more advanced sensors and cameras as allowed by the treaty, amount to spy missions.

Lt. Gen. Vincent Stewart, then-director of the Defense Intelligence Agency, told the House Armed Services Committee in March 2016 that he has “great concern about the quality of the [digital] imagery” for intelligence collection purposes and “would love to deny the Russians” that capability. (See ACT, March 2016.)

The Pentagon is in the process of transitioning to the more advanced digital sensors in its treaty flights over Russia. Even so, critics claim that commercial satellite imagery can provide higher-quality photos and videos than those taken on U.S. treaty flights.

In his May letter to Fischer, Mattis countered that the imagery produced on treaty flights “is verifiable and unclassified, which allows for its use in international or bilateral fora.” He noted that, in 2014, treaty imagery was “a key visual aid during U.S. engagement with allies and Russia regarding the military crisis in Ukraine.”

Meanwhile, the two OC-135B aircraft that the United States uses for treaty flights are increasingly unreliable, resulting in mission delays and cancellations. In 2017 the United States completed only 64 percent of its scheduled Open Skies missions over Russia, according to Mattis.

The House-passed version of the fiscal year 2018 National Defense Authorization Act would have barred the Pentagon from acquiring an upgraded digital imaging system for treaty flights. The Senate version of the bill did not include such a provision.

The Trump administration strongly objected to the House proposal. In a statement of policy on the bill, the White House said the prohibition would “prevent the United States from keeping pace with Russian Open Skies aircraft sensor upgrades, fully implementing the Open Skies Treaty, and increasing the value of the treaty to United States national security.”

Following negotiations between the two chambers, the final version of the authorization act conditioned funding for the new cameras and sensors on the receipt of two certifications. (See ACT, December 2017.) The first certification requires the defense secretary to confirm that the new cameras and sensors “will provide superior digital imagery as compared to digital imagery” commercially available to the Defense Department. The second certification requires the president or secretary of state confirm that Washington has imposed costs on Russia for its violation of the treaty. Neither certification has been provided to Congress.

The House has taken an even more aggressive approach this year, turning its attention toward preventing the Pentagon from replacing the OC-135B aircraft. The chamber’s version of the fiscal year 2019 National Defense Authorization Act, which passed the House in May, would eliminate the Pentagon’s $222 million request to buy new planes.

In addition, the bill would prevent the United States from participating in or implementing decisions made at the Open Skies Consultative Commission, the pact’s implementing body, to approve requests made by parties to the treaty to upgrade their digital sensor systems until several requirements are met.

These requirements include a certification that Russia has returned to compliance with the treaty and the submission of a report on the value of the treaty. Among the required elements of the report is “a plan, and its estimated comparative cost, to replace the treaty architecture with an increased sharing of overhead commercial imagery, consistent with United States national security, with covered state parties, excluding the Russian Federation.”

The Trump administration once again objected to the House proposal. In its statement of policy on the House bill, the White House said that “modern, capable, and cost-effective aircraft” are needed to replace the current unreliable OC-135Bs.

In contrast, the Senate version, which passed in June, would condition funding to upgrade the digital imaging system until the administration provides the certifications required by the fiscal year 2018 bill.

House and Senate leaders are hoping to reconcile differences in the bills and send a final version to the president by the end of July.

In the Senate, the fight for funding is being led by the two Republicans from Nebraska, who have a home-state interest. The OC-135Bs are based at Offutt Air Force Base near Omaha.

Fischer told the Omaha World-Herald in May that “if we don’t have the planes to complete the mission, we’re not hurting the Russians.… We’re hurting ourselves.”

Rep. Don Bacon (R-Neb.) echoed similar sentiments in an interview with the Daily Beast. “While Russia has chosen not to comply with some provisions [of the treaty], they generally adhere to the rest,” he said. “We need them to return to full compliance. Defunding our own aircraft doesn’t hurt them, it only hurts us.”

Anthony Wier, a former State Department and Senate official who worked on Open Skies Treaty implementation issues, told Arms Control Today in a June 21 interview that the effort to hollow out the treaty is based on the theory that there are alternative ways to collect the imagery it provides. But Wier, who is currently at the Friends Committee on National Legislation, noted that the agreement provides the United States and its allies “with imagery we cannot get any other way” and that the flights strengthen ties between the United States and its allies and reassure non-NATO members on Russia’s periphery.

Undermining the treaty, he continued, would further alienate the European allies of the United States, who are seething in the wake of Trump’s unilateral withdrawal from the Iran nuclear deal.

“We stay in Open Skies not to do favors for the Russians or anybody else, but because being able to fly a camera low and slow over Russian territory many times a year is in America’s interest,” Wier said.

The original version of this article misstated the nature of the U.S. concern regarding Russia's restriction of Open Skies Treaty flights over Kaliningrad.