In public remarks at the White House by the president and Crown Prince Mohammed bin Salman on March 20, Trump held up posters with pictures of U.S. military equipment sold to Saudi Arabia and boasted, “We make the best military product in the world, whether it’s missiles or planes or anything else.” 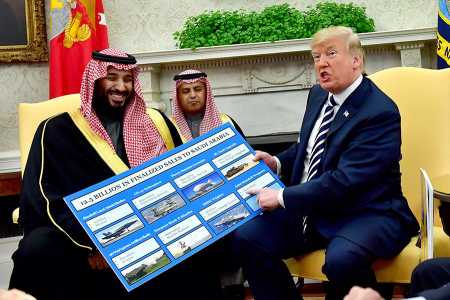 These sales “really [mean] many, many jobs. We’re talking about over 40,000 jobs in the United States,” Trump said. No basis for that number was provided, nor was a time frame because many of the arms sales cited cover a number of years.

Two days after the Oval Office meeting, the administration notified Congress of potential arms sales valued at more than $1 billion, including more than 6,500 anti-tank missiles, as well as services and parts for Abrams tanks, armored vehicles, helicopters, and other military equipment.

Just before the visit, a report from the Stockholm International Peace Research Institute (SIPRI) again found the United States to be the world’s largest arms exporter in a growing international market, with Riyadh remaining by far the largest importer of U.S. weapons. (See ACT, March 2017.)

Arms sales to Saudi Arabia have been controversial, most recently as the Saudi-led coalition fighting in Yemen has attacked civilian targets and contributed to humanitarian suffering in the country. Last year, 47 senators voted unsuccessfully to stop a sale of precision-guided munitions to Riyadh. (See ACT, July/August 2017.)

On the same day as the White House meeting, the Senate narrowly failed to pass a measure that sought to end U.S. military support to the Saudi war in Yemen, specifically referencing aerial refueling, intelligence sharing, and targeting assistance to Saudi-led forces. Saying that Congress had not approved U.S. military engagement and invoking the war powers resolution, 44 senators voted to bring the measure to the full Senate, where presumably it would have passed should a majority have agreed to its full consideration.

Sen. Chris Murphy (D-Conn.), who was among a bipartisan group of co-sponsors, said afterward, “Every day that America keeps helping Saudi Arabia bomb Yemen, we are less safe as a nation.” The vote “is a signal that the U.S. Senate is not going to stand idly by and let this fatal foreign policy mistake continue unabated,” he said.

SIPRI’s annual report on trends in international transfers of major weapons systems confirmed a central place for Saudi Arabia among the 98 countries to which the United States exported weapons from 2013 to 2017. Riyadh, whose total imports more than quintupled in that period, accounted for 18 percent of Washington’s exports, more than twice that of the next largest U.S. weapons importer, the United Arab Emirates.

As conflicts affected nearly all the countries in the Middle East, arms imports into the region more than doubled, with Saudi Arabia importing hundreds of combat aircraft and helicopters, tanks, and armored vehicles. The report drew extra attention to the transfer of missiles for use against ground targets by Egypt, Kuwait, Qatar, Saudi Arabia, and the UAE from China, France, the United Kingdom, and the United States.

The United States alone accounted for 34 percent of global exports during 2013-2017, up from 30 percent during the previous five-year period, and a significantly larger share than Russia, the second-largest exporter at 22 percent. Although the total volume of international arms trade rose by 10 percent during the period, Russia’s share declined in part due to reduced deliveries to Algeria, China, and Venezuela. Russia remains the largest supplier to the world’s top arms importer, India; but the United States is now New Delhi’s second-largest arms supplier, with U.S. exports to the country up 557 percent.

Further, some U.S. lawmakers are calling into question the economic logic of waivers to Saudi Arabia that would reduce the price it pays for the $15 billion Terminal High Altitude Area Defense system notified in October 2017, the single-largest notification of the year. Bloomberg reported on March 21 that the Saudis received what amounts to a $3.5 billion price cut through waivers from a U.S. law requiring foreign purchasers of U.S. weapons to pay part of the Defense Department’s costs in developing them.

Such waivers are now relatively commonplace, according to a Government Accountability Office report in January 2018; but Bloomberg quoted House Armed Services Committee member Jackie Speier (D-Calif.) saying, “American taxpayers are footing the bill for billions of dollars for researching and developing the weapons we sell to foreign governments.”