The Trump administration’s Nuclear Posture Review (NPR) report calls for the near-term deployment of a small number of low-yield nuclear warheads on submarine-launched ballistic missiles (SLBMs), but the administration has yet to find the money needed to do that.

The Defense Department’s budget request for fiscal year 2019, released on Feb. 12, includes $22.6 million for developing the missile variant. The department plans to spend a total of $48.5 million on the effort over the next five years, according to budget documents obtained by the Union of Concerned Scientists. 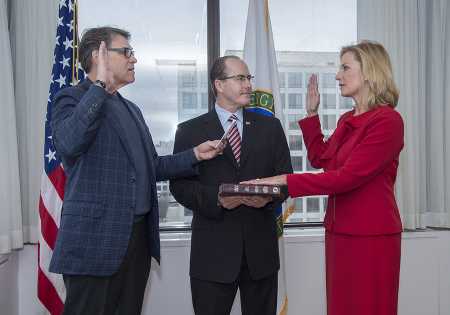 But the proposed budget for the semiautonomous National Nuclear Security Administration (NNSA), which maintains nuclear warheads and their supporting infrastructure, did not include the funds needed to modify SLBM warheads. The administration plans to modify a small number of 100-kiloton W76-1 SLBM warheads to detonate at a less powerful yield by removing the weapon’s uranium secondary core. The W76 is currently undergoing a $4 billion life extension program that is slated for completion next year.

NNSA Administrator Lisa Gordon-Hagerty told the Senate Armed Services Committee on March 14 that the agency is “working closely” with the Office of Management and Budget and the Pentagon to identify the necessary funding options. The Pentagon and NNSA say the modification can be completed quickly, perhaps as soon as the end of 2019.

U.S. law requires that the energy secretary specifically request congressional authorization and appropriations to develop a new or modified nuclear warhead. Although the NNSA did not seek funds for the modification in its original budget request, the agency could make a supplemental request later this year or ask Congress for permission to reprogram funds from other activities.

The NPR report also calls for the development of a nuclear-armed, sea-launched cruise missile (SLCM) that could be available for fielding within the next decade. The fiscal year 2019 budget request includes $1 million to begin an analysis of the performance requirements and costs to pursue that capability.

The United States deployed SLCMs during the Cold War, but President George H.W. Bush removed them from attack submarines and surface ships in the early 1990s. President Barack Obama ordered the retirement of the aging warhead for the missile in the report for the 2010 NPR. (See ACT, May 2010.)

The Trump administration NPR report calls for the development of the two additional low-yield nuclear capabilities primarily to counter Russia’s alleged willingness to use or threaten to use tactical nuclear weapons on a limited basis to stave off defeat in a conventional conflict or crisis, a strategy known as “escalate to de-escalate.” (See ACT, March 2018.) Russia possesses a larger and more diverse arsenal of such weapons than the United States.

According to the report, the development of the two options “is not intended to enable, nor does it enable, ‘nuclear war-fighting.’” Rather, expanding U.S. tailored response options will “raise the nuclear threshold and help ensure that potential adversaries perceive no possible advantage in limited nuclear escalation, making nuclear weapons employment less likely,” according to the report. Critics maintain that the report misconstrues Russian nuclear doctrine and that additional low-yield options are unnecessary.

The Trump administration is also pursuing research and development on and concepts and options for conventional ground-launched, intermediate-range missile systems in response to Russia’s alleged violation of the 1987 Intermediate-Range Nuclear Forces (INF) Treaty. (See ACT, January/February 2018.) The fiscal year 2019 budget documents do not specify how much money the Pentagon proposes to spend on this work.

In total, the Defense Department is requesting $24 billion for nuclear forces, an increase of $5 billion from the fiscal year 2018 request. This includes $11 billion for nuclear force sustainment and operations; $7 billion for upgrade programs such as the Columbia-class ballistic missile submarine replacement, B-21 “Raider” heavy bomber, and the long-range standoff weapon; and $6 billion for nuclear command, control, and communications. The NPR report acknowledges that the cost to sustain and upgrade the arsenal is “substantial,” but claims the projected bill is affordable and will consume no more than 6.4 percent of the Pentagon budget.

This proposed spending does not include the additional costs that must be borne by the NNSA to upgrade nuclear warheads and their supporting infrastructure. The administration requested $11 billion for the NNSA nuclear weapons account in fiscal year 2019.

The Congressional Budget Office estimated last fall that the plans President Donald Trump inherited from Obama to maintain and upgrade the U.S. nuclear arsenal over the next 30 years would cost $1.2 trillion. (See ACT, December 2017.) The figure does not include the effects of inflation.