“The Arms Control Association and all of the staff I've worked with over the years … have this ability to speak truth to power in a wide variety of venues.”
– Marylia Kelley
Tri-Valley Communities Against a Radioactive Environment
June 2, 2022
More Chemical Attacks Reported in Syria

Reports of chemical weapons attacks in the Damascus suburbs of eastern Ghouta surfaced in March as attempts continued at the UN Security Council to restart investigations to identify the perpetrators of banned chemical weapons use in Syria.

There were at least two chlorine gas attacks in rebel-held eastern Ghouta in March, according to local reports that blamed the Syrian government, for the attacks. The Syrian American Medical Society reported that 29 victims were treated in one facility on March 7. Another chlorine gas attack was reported in the same region on March 11. These follow at least five alleged chemical weapons attacks in January and February. 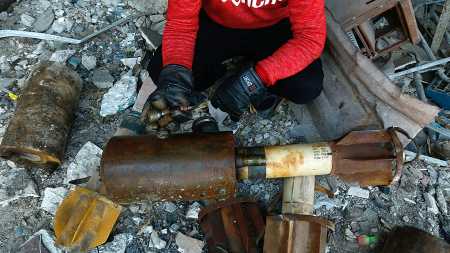 Although Syria joined the Chemical Weapons Convention in 2013 and subsequently declared and removed what it said was its chemical weapons stockpile, attacks since then indicate that Syria did not disclose its entire arsenal.

The Organisation for the Prohibition of Chemical Weapons (OPCW) created several investigative bodies to address concerns about Syria’s actions. The Declaration Assessment Team reported on March 2 to the OPCW Executive Council on its investigation of Syria’s chemical weapons declaration. The OPCW Fact-Finding Mission, which is tasked with verifying alleged chemical weapons attacks in Syria, will issue a report soon, Izumi Nakamitsu, the UN high representative for disarmament affairs, told the UN Security Council on Feb. 5.

Efforts are underway to revive investigations to identify the perpetrators of attacks in Syria. Investigations stalled in late 2017 after Russia, which backs the Syrian government with military aid, prevented the Security Council from extending the mandate for the UN-OPCW joint investigative team. (See ACT, December 2017.)

Russia circulated a proposal on Jan. 23 to renew such investigations, which the United States quickly dismissed as an attempt to distract from a launch the same day of a French-led initiative to prevent “impunity” for those authorizing chemical attacks. The United States also objected to the Russian draft’s terms, which included mandating that investigators visit all attack sites, even though many are in areas too dangerous to reach. In early March, the United States circulated an alternative draft resolution to restart the investigation effort.

Russian state-run media have quoted Russian military officials as claiming the recent chlorine gas attacks are a so-called false flag operation in which the rebels attack their own people to blame the Syrian regime, to draw international sympathy for their fight, and as a possible pretext for U.S. airstrikes against Syrian government sites.

OPCW Director-General Ahmet Üzümcü described the allegations as a “source of grave concern” in a March 13 address to a meeting of the OPCW Executive Council. Timothy Edwards, Canada’s acting permanent representative to the OPCW, argued that Syrian noncooperation with the Declaration Assessment Team and Fact-Finding Mission should disqualify it from maintaining the “rights and privileges of OPCW membership.”