While the United States continues discussions with European partners on a supplemental agreement to the Iran nuclear deal, the European Union is starting to prepare for the impact of President Donald Trump pulling out of the accord.

Brian Hook, director for policy planning at the State Department, said on March 21 he had “constructive” meetings in Berlin with France, Germany, and the United Kingdom, the so-called E3 group, on a supplemental agreement that addresses what Trump regards as “flaws” in the nuclear deal. 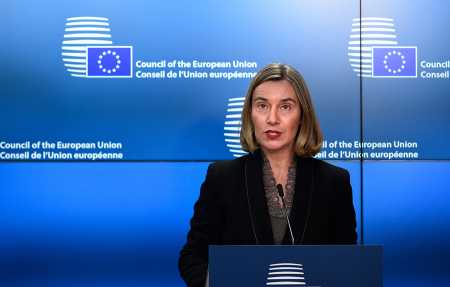 Trump threatened on Jan. 12 to withhold sanctions waivers in May, which would effectively put the United States in violation of the nuclear deal, unless the E3 and Congress act to address his concerns. (See ACT, March 2018.)

Further, Trump in March shook up his national security team, putting into key positions two officials who have been outspoken in their rejection of the Iran deal. Trump selected CIA Director Mike Pompeo, subject to Senate confirmation, to replace fired Secretary of State Rex Tillerson, and named former UN Ambassador John Bolton, who has advocated military action against Iran and North Korea, as White House national security adviser, succeeding fired Army Lt. Gen. H.R. McMaster. The two ousted officials had clashed with the president over their views that the benefits of maintaining the nuclear agreement exceed any shortcomings.

Trump’s threat has rattled key European allies, who have lobbied to keep the nuclear deal, and perhaps complicated anticipated negotiations with North Korea, which would have reason to doubt the reliability of any U.S. promises tied to denuclearization. Further, Iranian officials have said such action by Trump would mean their country is no longer bound by the nuclear deal, which could lead to a military confrontation if Iran resumes certain nuclear activities.

Hook would not predict whether the United States and the E3 would conclude an agreement before the May 12 deadline, but he said conversations were focused on the sunset provisions, or elements of the deal that expire; Iran’s missile program; and stronger inspections. He said that the United States and the E3 are working to “narrow” the differences to see if an agreement can be reached.

If an agreement is reached, Hook said it will be presented to Trump, who would make a decision on “whether he wants to remain in the deal or stop waiving sanctions.”

Hook’s meetings with the E3 took place as Trump fired Secretary of State Rex Tillerson, citing disagreements over the nuclear deal as one of the causes for his dismissal. Tillerson had urged Trump to remain in compliance with the nuclear deal.

Although the EU did not participate in the talks between the E3 and the United States, EU foreign policy chief Federica Mogherini, speaking after the EU Foreign Affairs Council meeting March 19, said that the EU is starting to prepare to “protect European interests” in case “decisions are taken elsewhere” not to abide by the deal.

Mogherini did not provide details on what the EU’s preparations included, but if the United States reimposes sanctions on Iran, it would impact European entities doing legitimate business with Iran.

Hook said the United States is also “engaged in contingency planning” for “any eventuality.”

Mogherini, who headed the P5+1 group in negotiations with Iran on the nuclear deal, said the EU is prepared to address Iran’s ballistic missiles and activities in the region through dialogue and separately from the nuclear agreement. The E3 states are looking at sanctions to respond to Iran’s actions in these two areas, but Mogherini said the EU did not discuss any additional sanctions.

The P5+1 and Iran met in March for the regular quarterly meeting of the Joint Commission, the body set up by the nuclear deal to oversee its implementation. The March 16 chair’s statement called for continued “effective implementation” of the accord by all parties and welcomed the most recent quarterly report of the International Atomic Energy Agency confirming Iran’s “continued adherence” to its nuclear commitments.

During the Joint Commission meeting, Iran raised what it termed “breaches of obligations or delays” by the United States on sanctions relief. Iranian Deputy Foreign Minister Abbas Araqchi called attention to delays in licenses for passenger aircraft sales.

The nuclear deal specifically references providing licenses for aircraft as part of the sanctions relief granted to Iran.

Hook said on March 21 that he told Iran during the Joint Commission meeting that the United States would not issue licenses “at the expense of our national security” because Iran uses its commercial airlines to “move terrorists and weapons” around the Middle East. He said he urged Iran to make reforms to its civil aviation.

Trump also called on Jan. 12 for Congress to pass legislation addressing the flaws he identified in the deal. Members of Congress, however, appear to be waiting to see what comes out of the negotiations with the E3 before acting. Sen. Bob Corker (R-Tenn.), chairman of the Senate Foreign Relations Committee, said on March 13 that Trump will have to make a decision to waive sanctions by May 12 “based on where the Europeans evolve to.”

It is “solely the responsibility of the administration to work out something with our European allies,” Corker said. “It’s not Congress’ responsibility.”

Members of Congress will likely have an opportunity to seek additional clarity from the Trump administration on its approach to the May 12 deadline during Pompeo’s confirmation hearing for secretary of state.

Pompeo, who served in the House of Representatives during the 2015 congressional debate over the nuclear deal, opposes the agreement. In a July 2016 opinion essay for Fox News, he called for the United States to walk away from the agreement and argued that it has virtually guaranteed that Iran will have the freedom to build an arsenal of nuclear weapons when limitations expire.

The Limits of Breakout Estimates in Assessing Iran’s Nuclear Program