Representatives to the second preparatory committee meeting for the 2020 nuclear Nonproliferation Treaty (NPT) review conference will seek to focus on shared goals in the face of daunting obstacles to a successful outcome. 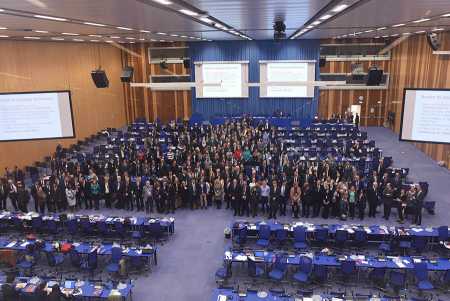 As chair of the conference, Bugajski said he intends to stress that “there is no single road toward disarmament and that disarmament is not only about reductions.”

Bugajski began consulting with member states and civil society representatives shortly after the first preparatory committee meeting in May 2017, he told Arms Control Today in a March 14 email. The consultations included regional seminars in Mexico City, Addis Ababa, and Jakarta and regional group consultations in Geneva, Vienna, and New York. Bugajski also established a task force for the conference at the Polish Foreign Ministry.

Other representatives highlighted the need for practical steps to uphold the NPT regime ahead of its 50th anniversary in 2020 and in light of mounting challenges.

“Our main objective is really quite straightforward, and one hopefully shared by the vast majority of NPT members,” Carl Magnus Eriksson, director and deputy head of the Department for Disarmament and Non-Proliferation at the Swedish Ministry of Foreign Affairs, told Arms Control Today in a March 12 email. “It is to demonstrate the continued vitality and indispensable role of the NPT framework despite many challenging circumstances.”

Jamie Walsh, Ireland’s deputy director for disarmament and nonproliferation, said in a March 16 email to Arms Control Today, “In order to remain relevant and effective it is critical that the treaty, which has long been at the center of the nuclear disarmament and non-proliferation regime, doesn’t become stagnant. Simply reiterating commitments is not enough; there must be momentum and progress.”

Diplomats cited a number of challenges that could inhibit progress at the meeting, including a lack of trust among member states, the global security environment, and North Korea’s illegal nuclear and missile programs.

Given these challenges, several disarmament representatives encouraged member states to concentrate on areas of common interest.

Robert Wood, the U.S. ambassador to the Conference on Disarmament, chided those pursuing “unrealistic agendas that cannot gain consensus” in a March 26 email to Arms Control Today. The United States will continue to remind states that “that disarmament efforts cannot be divorced from the broader international security environment,” he wrote.

Eriksson suggested focusing on “practical measures to reduce risks, enhance transparency and build confidence.” Other officials echoed the need for practical measures. Both Nobushige Takamizawa, Japanese permanent representative to the Conference on Disarmament (CD), and an official in the German foreign ministry, who commented on a nonattribution basis, recommended member states include a focus on implementing previously agreed steps, including the 2010 action plan.

States are already considering how to bridge divides, such as the advancement of disarmament, which could threaten conference unity. The committee will be the first gathering of NPT states-parties since the adoption of the Treaty on the Prohibition of Nuclear Weapons in September 2017, which is opposed by nuclear-weapon states. (See ACT, October 2017.)

Walsh, whose government was one of leading negotiators of the 2017 treaty, stated that, at the committee meetings, Ireland would “continue to emphasize the synergies that exist” between the prohibition treaty and the NPT and hopes that the sessions “will offer an opportunity to dispel any suggestion that states that were actively to the fore in negotiating the [prohibition treaty] are somehow disengaging from the NPT.”

Takamizawa encouraged all nuclear-weapon states to take “concrete disarmament measures, even small
steps that they can accomplish on a voluntary basis.”

Hans Brattskar, permanent representative of Norway to the United Nations and other international organizations in Geneva, pointed to the success of cooperative measures between nuclear-weapon states and non-nuclear-weapon states, such as on nuclear disarmament verification. “From a Norwegian perspective, it is essential to foster the confidence needed for balanced, mutual, irreversible and verifiable reductions of nuclear arsenals in the future,” he said.

Meanwhile, another disarmament body, the long-stalled CD, agreed on Feb. 16 to create subsidiary bodies to take forward a substantive program of work. The 65-member body, which operates on consensus, last agreed to programs of work in 2009 and in 1998.

Five subsidiary committees were established to address the cessation of the nuclear arms race, the prevention of nuclear war, the prevention of an arms race in outer space, effective international arrangements to assure non-nuclear-weapon states against the use or threat of use of nuclear weapons, new types of weapons of mass destruction, a comprehensive program of disarmament, and transparency in armaments.

UN Secretary-General António Guterres, in a Feb. 16 statement, welcomed the move and urged CD members to “redouble their efforts and forge a new consensus for disarmament.” In his email, Bugajski also praised the development, but recommended “caution and patience,” given the failure of the body to implement the program of work adopted in 2009.

On March 15, the CD deadlocked over the coordinators for the five bodies, but after intensive consultations, the matter was resolved by adjusting the program of work.

“As a former French delegate to the CD, I can confirm that, oftentimes, procedural issues are a fig leaf for substantive differences,” wrote Marc Finaud, senior program adviser at the Geneva Centre for Security Policy, in a Feb. 16 email to Arms Control Today.