An attempted assassination of a former Russian spy with a highly lethal Russian-developed nerve agent calls into question Moscow’s compliance with the Chemical Weapons Convention (CWC) and threatens to further undermine the norm against chemical weapons use.

The United Kingdom, France, Germany, and the United States were the first to accuse the Russian government of carrying out the attempted assassination of Sergei Skripal and his daughter, Yulia, in Salisbury, UK, on March 4 using the chemical agent Novichok. As a consequence, the United States announced March 26 that it was expelling 60 Russian diplomats, joining more than 20 European countries taking similar actions to punish Moscow. 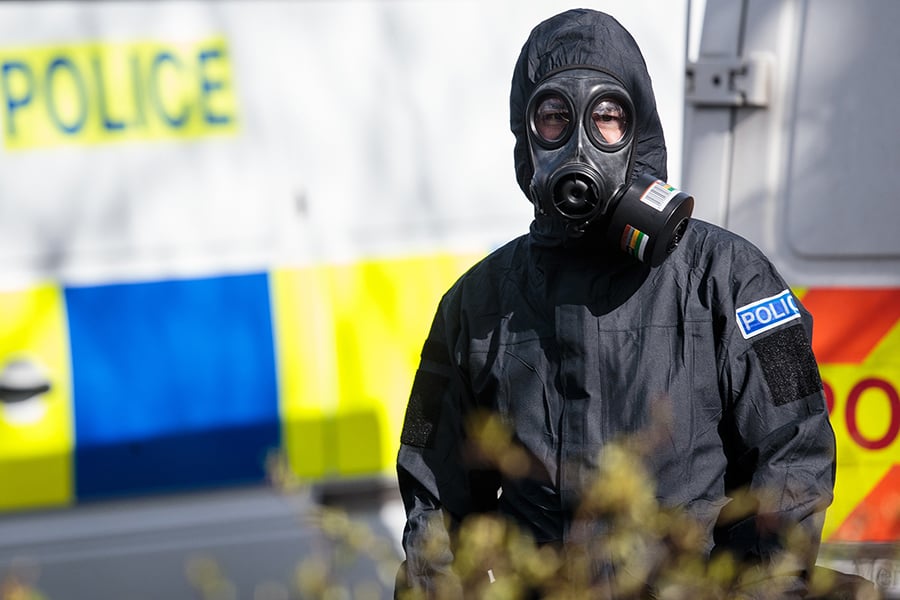 “No country except Russia has the combined capability in chemical warfare, intent to weaponize this agent, and motive to target the principal victim,” UK Prime Minister Theresa May wrote in a March 13 letter to the president of the UN Security Council.

The Russian government has initiated assassinations on UK soil previously, including the targeted killing of former Russian agent Alexander Litvinenko by a radioactive isotope in London in 2006, which President Vladimir Putin allegedly authorized.

Alexander Shulgin, Russian permanent representative to the Organisation for the Prohibition of Chemical Weapons (OPCW), derided UK accusations as “nothing but fiction and another instance of the dirty information war being waged on Russia,” during a March 13 OPCW Executive Council meeting. Although the UK asserted that Russian responsibility is “highly likely,” most members of the UN Security Council are less confident and, at a March 14 emergency meeting called by the UK, requested that the OPCW conduct an independent investigation.

The UK notified the OPCW Technical Secretariat of the attack on March 8 and OPCW experts subsequently were deployed to the UK to collect samples. The results of the analysis, which will not assign blame, could come by mid-April at the earliest, OPCW Director-General Ahmet Üzümcü said at a briefing at the UN on March 20.

The Soviet Union developed Novichok secretly in the 1970s and 1980s, after which Russia inherited the program. Its existence was publicly revealed only when Soviet scientist Vil Mirzayanov leaked the project to the press in the 1990s. Novichok reportedly is more lethal than known nerve agents sarin and VX.

The March 4 attack would constitute its first known use, although some chemical weapons experts told The New York Times that the agent could have been used in assassinations in the past but not recognized.

The OPCW, the implementing body of the CWC, announced that Russia destroyed its entire declared chemical weapons arsenal in September 2017. Russia did not declare Novichok agents as part of its chemical weapons arsenal when it joined the convention. Vassily Nebenzia, Russian permanent representative to the United Nations, at the UN Security Council on March 14 denied that Russia possesses any Novichok agent.

If Russia is confirmed as responsible, it would mean that Russia not only failed to declare its entire arsenal to the OPCW but also that it retained a part of its arsenal after the OPCW verified that it had destroyed it. That would constitute a “major case of non-compliance with the treaty that would need to be remedied in short order to maintain confidence in the efficacy of the treaty and the OPCW,” Gregory Koblentz, director of the Biodefense Graduate Program in the Schar School of Policy and Government at George Mason University, told Arms Control Today in a March 16 email.

In a March 12 address to Parliament, May urged Russia to disclose its Novichok program to the OPCW in order to return to compliance with the CWC. Russia also would need to allow the OPCW to monitor the destruction of any remaining chemical weapons stocks or provide “credible evidence” of chemical weapons and production facilities destruction to the OPCW, Koblentz said.

At a March 14 meeting of the UN Security Council, Nikki Haley, the U.S. ambassador to the United Nations, demanded that the body “take immediate, concrete measures” to address Russian noncompliance, although council action may be challenging given Russia’s veto power.

Investigations could be mandated instead through the secretary-general’s mechanism, said Andrew Weber, a former U.S. assistant secretary of defense for nuclear, chemical, and biological defense programs, in a March 15 email to Arms Control Today.

The use of Novichok in the UK occurred as the norm against chemical weapons use may be eroding globally due to ongoing use of chemical weapons by Syria, a CWC state-party, and North Korea’s use of VX to assassinate Kim Jong Nam in Malaysia last year.

“The use of chemical weapons anywhere erodes the norm everywhere,” said Koblentz.