The dangers of nuclear weapons are all too clear. They pose a catastrophic risk to human life and to the environment, and there is great and justified anxiety around the world about the threat of nuclear war. 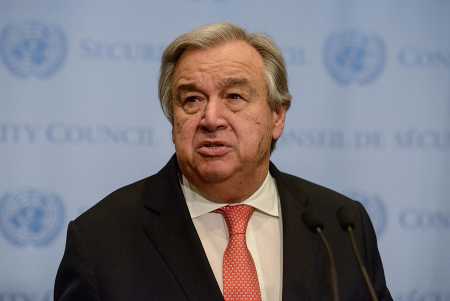 In East Asia, millions face this threat up close on a daily basis. I welcome the courageous initiatives taken by the Republic of Korea during the Olympic Games, but this is not enough. We need lasting improvements, based on the central objective of the denuclearization of the Korean peninsula and sustainable peace in the region. I also welcome the completion of reductions by the United States and the Russian Federation under the New Strategic Arms Reduction Treaty.

Disarmament and arms control have achieved important gains. They have reduced inventories of strategic nuclear weapons, entirely prohibited chemical and biological weapons, and led to agreed prohibitions and limits on the use of indiscriminate weapons, including landmines and cluster munitions, but the first resolution of the General Assembly—seeking the complete elimination of weapons of mass destruction—remains unfulfilled. There are currently some 15,000 nuclear weapons on earth. The danger posed by these weapons inspired the Treaty on the Prohibition of Nuclear Weapons that opened for signature last year.

In recent years, long-standing goals, including reductions in military spending and armed forces, have been seemingly forgotten. Military power is celebrated, without reference to the obscene human cost of conflict. The global arms trade has reached the highest level since the Cold War.

Meanwhile, the impact of war has moved from frontlines to front doors. Armed conflicts are killing more and more civilians, as governments and nonstate armed groups use powerful explosive weapons in populated areas. Weapons of war are marketed and traded for profit like ordinary consumer goods, and taboos against the use of chemical weapons and nuclear testing have been repeatedly challenged.

In the face of this deterioration, the international community must urgently rebuild a common vision on disarmament and arms control. I am preparing a new initiative aimed at giving greater impetus and direction to the global disarmament agenda.

On prevention, we must respond to the dangers of the overaccumulation and proliferation of weapons and reinforce the need to integrate disarmament into the United Nations’ efforts on preventive diplomacy and peacemaking. We must work together toward forging a new momentum on eliminating nuclear weapons.

On humanitarian action, we need to focus on the growing and unacceptable impact of conventional weapons on civilians and infrastructure, particularly in urban areas, which represents also a clear violation of human rights. On sustainable development, we need to strengthen the links between disarmament and the 2030 Agenda for Sustainable Development, reduce the illicit arms flows that feed conflict and divert resources, and understand the dire economic consequences of excessive military spending.

Finally, we need to examine the potential risks and challenges posed by the weapons of the future. This includes the relationship between new technologies—autonomous and unmanned weapons, artificial intelligence, biotechnology and space-based systems—and international humanitarian and human rights law.

We cannot contemplate further erosion of the global framework for disarmament. We must bring the current review process of the nuclear Nonproliferation Treaty to a successful outcome in 2020. This cornerstone treaty must remain strong for nonproliferation, disarmament, and the peaceful use of nuclear power.

We must bring the Comprehensive Test Ban Treaty into force without delay. We must enforce the Chemical Weapons Convention and ensure accountability for violations. We must reinvigorate the agenda for disarmament and arms control, and we must work together toward our common goal: a world free of nuclear weapons.

António Guterres, secretary-general of the United Nations, gave these remarks February 28 at the Conference on Disarmament in Geneva. This version has been edited for space.

Getting Back on Track to Zero Nuclear Weapons

Plan A: How a Nuclear War Could Progress