The United States continues to ratchet up pressure on North Korea to end its nuclear weapons and missile development, with Washington imposing additional sanctions and calling for better implementation of UN sanctions.

A U.S. Treasury Department news release Jan. 24 stated that nine entities, 16 individuals, and six ships were added to the sanctions list as part of U.S. efforts to “systematically target individuals and entities financing the [Kim Jong Un] regime and its weapons programs.” The effort is to target “illicit actors in China, Russia, and elsewhere” for working on behalf of North Korean financial networks and for entities that “continue to provide a lifeline to North Korea” in violation of UN Security Council resolutions, said Treasury Secretary Steven Mnuchin. 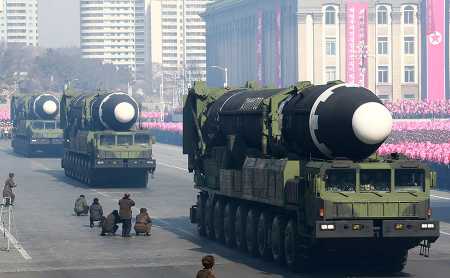 Earlier in the month, U.S. Secretary of State Rex Tillerson called on all states to improve sanctions implementation during a meeting of 20 countries in Vancouver. The countries represented were the 18 that supported South Korea during the Korean War by sending troops under UN command, plus South Korea and Japan.

Sanctions implementation remains a problem, according to a leaked report from a UN panel of experts that assesses implementation of Security Council measures on North Korea.

The experts report, obtained by the Associated Press in early February, said that North Korea is using “deceptive practices” to circumvent financial sanctions and noted that there are “critical deficiencies” in sanctions implementation. The report concluded that Pyongyang is engaging in prohibited ballistic missile activities with Syria and Myanmar and exceeding caps on oil imports, including through illegal ship-to-ship transfers.

Tillerson, at the Vancouver meeting, specifically called for improving maritime interdiction activities and putting an end to ship-to-ship transfers.

The report found that North Korea evaded UN sanctions on coal by shipping it through other countries and using deceptive practices to hide the origin of the coal. Coal purchases were fully banned by Security Council Resolution 2371 in August 2017. The UN report also noted that China imported iron ore from North Korea in violation of sanctions.

China and Russia were not invited to participate in the Vancouver meeting, but Tillerson specifically called on both countries to do more to implement UN sanctions. A Chinese Foreign Ministry spokesman said in a Jan. 16 press briefing that China opposed the Vancouver meeting and that it has “no legality.”

Leaders at the Vancouver meeting emphasized the importance of full implementation of UN sanctions, but they appeared split on how to engage with North Korea diplomatically.