Two analysts at the People’s Liberation Army (PLA) Academy of Military Science, which informs China’s Central Military Commission, raised the prospect of an accelerating nuclear weapons program by China. “To enhance China’s strategic counterbalance in the region and maintain China’s status as a great power, and protect national security, China has to beef up and develop a reliable nuclear deterrence capability,” they wrote in PLA Daily, according to a translation by the South China Morning Post. 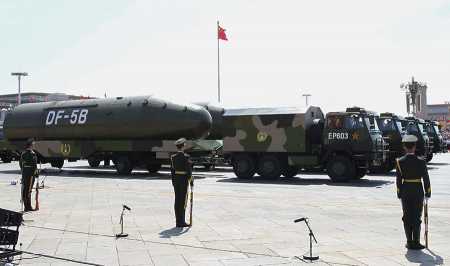 The commentary argued that both the development of new nuclear weapons proposed by the latest U.S. Nuclear Posture Review (NPR) and Russian and U.S. nuclear weapons modernization programs could create a need for an enhanced deterrent through an expanded Chinese nuclear force.

The PLA Daily “provides an outlet for more extreme views” within the PLA, Catherine Dill, a senior research associate with the James Martin Center for Nonproliferation Studies at the Middlebury Institute of International Studies at Monterey, told Arms Control Today in a Feb. 14 email. She noted that opinion pieces may not signal future military plans.

The United States asserted in a recent intelligence assessment and in its latest NPR report that China is already advancing and expanding its nuclear weapons capabilities. China is modernizing its nuclear missiles to “ensure the viability of China’s strategic deterrent by providing a second-strike capability,” according to the U.S. intelligence community’s worldwide threat assessment report, which was presented to Senate Intelligence Committee on Feb. 13.

Twice in November 2017, China tested a DF-17, a medium-range ballistic missile with a hypersonic glide vehicle that could help it evade missile defenses. China continues to develop its submarine-launched ballistic missiles (SLBMs) and may be producing additional nuclear-powered submarines, according to the report.

China is “expanding its already considerable nuclear forces” and pursing “assertive military initiatives,” according to the NPR report. The NPR provides a rationale for the Trump administration’s plans to accelerate U.S. nuclear weapons programs.

But China’s modest nuclear force posture, official Chinese statements, and expert analysis all point to China rejecting an aggressive nuclear expansion. China maintains a small nuclear arsenal compared to those of Russia and the United States. Although a level of secrecy surrounds the Chinese nuclear arsenal, the Stockholm International Peace Research Institute in July 2017 estimated China has 270 nuclear warheads.

China also holds to a no-first-use policy, whereby it declares that it will only use nuclear weapons in response to a nuclear attack. The Chinese Defense Ministry reaffirmed that it follows this policy as recently as Feb. 4, when it also claimed that it would “resolutely stick to peaceful development and pursue a national defense policy that is defensive in nature.”

Other analysts doubt that China will pursue an arms buildup. Chinese military analyst Zhao Chenming told the South China Morning Post on Jan. 30 that China is too “pragmatic” to spend heavily on an arms race. In a Feb. 9 blog post, Gregory Kulacki, China project manager for the Union of Concerned Scientists, underlined the defensive nature of Chinese nuclear forces, arguing that although China has the ability to engage in an arms race, it is “unlikely to do so.”