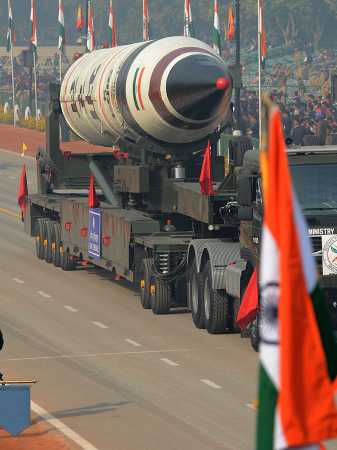 India successfully tested an intercontinental ballistic missile (ICBM), the Agni-5, for the fifth time. The Jan. 18 test was the first of two reported tests to be completed before the missile can enter service. The missile previously completed four successful “developmental” tests. A defense ministry statement declared that the test “reaffirms the country’s indigenous missile capabilities and further strengthens our credible deterrence.” Indian President Ram Nath Kovind tweeted his support, claiming that it “will boost our strategic defence.”

The Agni-5, first tested in 2012, is India’s first ICBM. With a range of more than 3,100 miles, analysts assess that the missile is being developed to deter China. Officially, China was silent on the launch, but the state-owned Global Times wrote on Jan. 18 that the test “poses a direct threat to China’s security as well as a big challenge to the global efforts of nuclear nonproliferation.” India also tested the Prithvi-2, Agni-2, and Agni-1 missiles in February.—ALICIA SANDERS-ZAKRE