The International Partnership for Nuclear Disarmament Verification (IPNDV) has developed a verifiable framework process for dismantling nuclear weapons and outlined the next phase of its work. It concluded its first phase after convening its fifth plenary meeting in Buenos Aires on Nov. 29-Dec. 1. 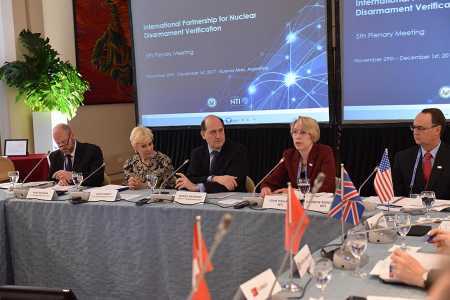 The Nuclear Threat Initiative (NTI) and U.S. Department of State established the public-private partnership in 2014 to address the technical challenges involved in nuclear disarmament verification. More than 25 nuclear- and non-nuclear-weapon states have participated in the initiative, which has held three working group meetings in addition to plenary sessions. The working groups focused on monitoring and verification, on-site inspection, and technical challengesto verification.

Building on past dismantlement and verification exercises, including U.S.-Russian experience and a UK-Norwegian initiative, the working groups collaborated to outline a 14-step process for verifiable nuclear warhead dismantlement. The groups acknowledged that further work is needed, including testing several of the promising technologies and procedures and addressing additional disarmament steps beyond warhead dismantlement.

The IPNDV will form three new working groups in the next phase of its work to address outstanding issues on verification of nuclear weapons declarations, verification of reductions, and technologies for verification. The work is intended to contribute to the discussion on verification issues at the nuclear Nonproliferation Treaty (NPT) review conference in 2020.

“Specifically, the partnership will be able to leverage its experience and expertise to look into issues such as how to verify declarations, data handling requirements across the inspection process, and the use of technologies to enable measurements of special nuclear material and high explosives, all while preventing the disclosure of proliferation-sensitive information,” Anita Friedt, the acting U.S. assistant secretary of state for arms control, verification, and compliance, said at the opening of the plenary.

NTI President Joan Rohlfing, also speaking at the beginning of the plenary, hailed the initiative as a unifying step forward as international disarmament dialogue grows ever more divisive. “We are doing the difficult ‘technical homework’ over a sustained, multi-year process that will enable future disarmament to take place when the political environment allows it,” she said.

While the majority of the participants have been nuclear-weapons states and so-called umbrella states, which receive security guarantees from nuclear-armed states, such as Finland, Japan, and Poland, a few of the negotiators of the Treaty on the Prohibition of Nuclear Weapons, including Brazil, Mexico and Sweden, also contributed to the effort. Russia and China, which participated as observers in phase one of the project, will not participate in phase two.

Participants describe the IPNDV as part of nuclear-weapon states’ fulfillment of NPT's Article VI, which obligates those states to pursue good faith negotiations towards disarmament.

The IPNDV intends to share the results of phase two at the upcoming 2020 NPT Review Conference, where compliance with Article VI by nuclear-weapon states has long been a point of contention. The first meeting of phase two of the initiative will take place in Sweden in March 2018.