The United States and Russia are on track to fulfill their obligations under the 2010 New Strategic Arms Reduction Treaty (New START) by the agreement’s Feb. 5 implementation deadline, but the future of the agreement is in doubt. 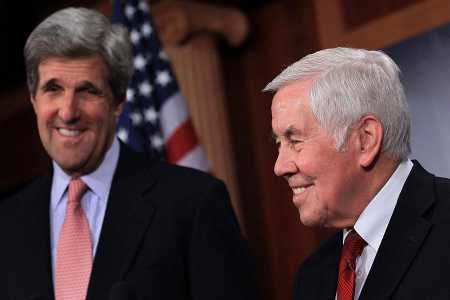 The treaty is one of the few remaining bright spots in the U.S.-Russian relationship, as both sides have abided by its terms.

As of the most recent biannual exchange of treaty data compiled by the State Department last September, the United States had met the limits for all three of the central weapons categories ahead of the deadline. Russia had reached two of the limits and was a mere 11 deployed warheads above the required limit of 1,550.

New START is set to expire on Feb. 5, 2021, and can be extended by up to five years without further approval by the U.S. Senate or Russian Duma if both presidents agree. But U.S. President Donald Trump has criticized the treaty and in a January 2017 phone call responded negatively to a suggestion from Russian President Vladimir Putin that their countries work to extend the treaty, according to Reuters report.

Mikhail Ulyanov, the director of the Russian Foreign Ministry’s nonproliferation and arms control department, said in a Dec. 19 interview with Interfax that Russia is willing to consider a five-year extension but that the United States is not currently “prepared for this kind of conversation.”

The U.S. administration is conducting a Nuclear Posture Review, which could involve consideration of the New START limits. (See ACT, March 2017.) The review is scheduled to be completed in February.

If New START is allowed to lapse with nothing to replace it, there would be no limits on U.S. and Russian strategic nuclear forces for the first time in decades.

In November, Christopher Ford, then-special assistant to the president and National Security Council senior director for weapons of mass destruction and counterproliferation, told an audience in Washington that New START “remains a valuable tool for ensuring transparency and predictability between the United States and Russia.”

“We hope that after the February deadline is met” and the administration’s nuclear posture and ballistic missile defense reviews are complete, “we can begin to assess whether or not extending New START for an additional five years…is in our national security interest,” said Ford, who is now assistant secretary of state for international security and nonproliferation.

But some Pentagon officials have said that it is too early to consider extending New START. There is “no need to extend New START today,” Gen. Paul Selva, the vice chairman of the Joint Chiefs of Staff, told the House Armed Services Committee in March.

Apart from New START, other key pillars of the U.S.-Russian nuclear arms control architecture, like the bilateral relationship more broadly, are under siege, most notably the 1987 Intermediate-Range Nuclear Forces (INF) Treaty. Since 2014, the United States has accused Russia of violating that accord.

The House-passed version of the fiscal year 2018 National Defense Authorization Act would have prohibited the use of funds to extend New START unless Russia returns to compliance with the INF Treaty. (See ACT, September 2017.)

Sen. Tom Cotton (R-Ark.) said at an event in Washington in July that by threatening New START and the 1992 Open Skies Treaty, two accords that Russia hopes to preserve, the United States demonstrates a “firm and unyielding response” to Russian noncompliance.

The final version of the authorization bill signed by Trump in December did not include the House language on New START.