The Trump administration is poised to begin negotiating a nuclear cooperation agreement with Saudi Arabia amid concerns of some lawmakers about whether the administration will seek sufficiently strong nonproliferation safeguards. 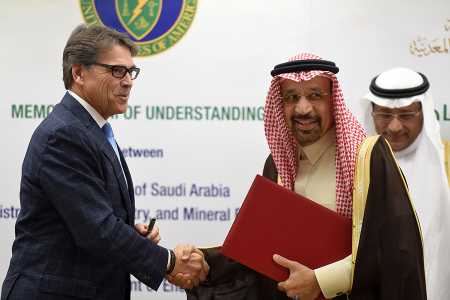 During a visit to Saudi Arabia in early December, Energy Secretary Rick Perry said that formal talks will begin soon on a civilian nuclear pact, known as a 123 agreement. Such an agreement, named after the section of the 1954 Atomic Energy Act that requires it, sets the terms for sharing U.S. peaceful nuclear energy technology, equipment, and materials with other countries.

In a Dec. 13 briefing for Senate Foreign Relations Committee staff members, officials from the State and Energy departments said that the administration has yet to determine whether it will insist that Saudi Arabia agree to forgo uranium enrichment and spent fuel reprocessing should talks begin, according to a Reuters report. These activities are considered sensitive because they can be used to make fuel for nuclear power reactors and produce nuclear explosive material.

Saudi Arabia has ambitious plans for nuclear power, but currently has no nuclear power plants. The kingdom plans to construct 16 nuclear power reactors over the next 20 to 25 years at a cost of more than $80 billion, according to the World Nuclear Association.

On Nov. 28, Christopher Ford, then-special assistant to the president and senior director for weapons of mass destruction and counterproliferation on the National Security Council staff, told the committee in testimony that a ban on enrichment and reprocessing in an agreement with Saudi Arabia “is not a legal requirement, it is a desired outcome.” He said the preliminary talks with the Saudis on a nuclear deal had begun but that he could not provide details in public.

Ford was confirmed by the Senate in December as assistant secretary of state for international security and nonproliferation.

Supporters of a ban on enrichment and reprocessing say that such an approach is critical to nonproliferation efforts and that the United States should demonstrate leadership in this area. They note that the Middle East is an unstable region and some current and former Saudi officials and members of the royal family have warned of matching Iran’s nuclear capability.

Sen. Benjamin Cardin (D-Md.), ranking member on the Senate Foreign Relations Committee, said at the Nov. 28 hearing that a 123 agreement with Saudi Arabia should include the same nonproliferation standards as those contained in the agreement the United States negotiated with the United Arab Emirates in 2009.

In that agreement, the UAE made a legally binding commitment not to pursue an indigenous enrichment or reprocessing program. (See ACT, June 2009.) “[I]f we don't draw a line in the Middle East,” Cardin said, “it's going to be all-out proliferation.”

An aide to Sen. Edward Markey (D-Mass.) told Arms Control Today that “if the Trump administration is negotiating a 123 agreement with Saudi Arabia, Congress must be notified and involved.” “We should not compromise on important nonproliferation controls before even being asked to do so in an attempt to conclude an agreement that could enable commercial cooperation,” the aide added.

Opponents of a ban on enrichment and reprocessing argue that such a policy would likely be unacceptable to Riyadh, stymie prospects for U.S. companies to sell nuclear goods, and drive potential buyers to nuclear supplier countries such as France and Russia, which have less rigorous nonproliferation requirements than the United States.

President Donald Trump has pledged to revitalize the U.S. nuclear industry by allowing it to better compete with other supplier countries. The administration is currently conducting a review of U.S. policy toward civil nuclear power.

After the Indian nuclear test explosion in 1974, Congress amended the Atomic Energy Act in 1978 to mandate that nuclear cooperation agreements include tougher bulwarks to prevent U.S. nuclear assistance from being diverted to military uses. The amendment put in place nine provisions, including the requirement that recipients of U.S. civil nuclear cooperation have in place full-scope international safeguards and may not conduct activities such as uranium enrichment and spent fuel reprocessing unless Washington first consents. The Atomic Energy Act has not been updated since 1978.

In a May 2008 memorandum of understanding with the United States on nuclear energy cooperation, Saudi Arabia committed “to rely on international markets for nuclear fuel and to not pursue sensitive nuclear technologies.” The Obama administration beginning in 2012 engaged in periodic talks with Riyadh on a 123 agreement, but was unable to strike a deal, in part due to Saudi Arabia’s unwillingness to stick to that 2008 pledge.

Saudi Arabia ratified the nuclear Nonproliferation Treaty in 1988 and concluded a comprehensive safeguards agreement with the International Atomic Energy Agency (IAEA) in 2009. But Riyadh has neither signed nor ratified an additional protocol, which provides the IAEA with expanded rights of access to nuclear information and locations.

The United States has not in recent years negotiated a 123 agreement with a state that had not signed an additional protocol.