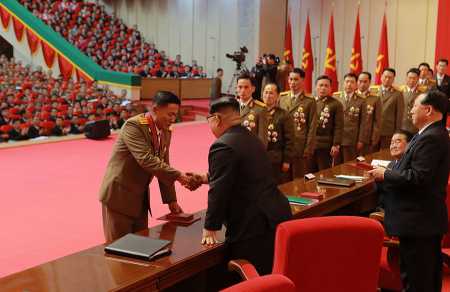 The Nov. 29 test took place just before 3 a.m. in North Korea, and the missile flew on a lofted trajectory for 53 minutes before splashing down in the Sea of Japan about 1,000 kilometers from the launch site. The test, which violates UN Security Council resolutions, was firmly condemned by the international community and escalated concerns about a potential pre-emptive or preventative strike by the United States in response to Pyongyang’s nuclear and missile advances.

North Korea’s Korean Central News Agency (KCNA) heralded the test of the intercontinental ballistic missile (ICBM), designated the Hwasong-15, as a success and described the missile as “capable of carrying super-heavy nuclear warhead and attacking the whole mainland of the U.S.”

David Wright, co-director of the Global Security program at the Union of Concerned Scientists, estimated that the missile would have a range of 13,000 kilometers if flown on a standard trajectory, which would put the entire continental United States within its range. U.S. Defense Secretary Jim Mattis confirmed the range capability on Nov. 28 when he told reporters that the missile could hit “everywhere in the world.”

North Korea did test an ICBM, the Hwasong-14, twice in July, but the estimated range of that system is 10,500 kilometers. (See ACT, September 2017.) At that range, Washington, D.C., would likely have been just out of range, and experts assess that the weight of a nuclear warhead would further reduce that missile’s range.

Like the Hwasong-14, the Hwasong-15 is a two-stage, liquid-fueled system. The Hwasong-15, however, has a number of different characteristics, including a pair of rocket engines powering the first stage, unlike the single-engine Hwasong-14.

Michael Elleman, senior fellow at the International Institute for Security Studies, concluded in a Nov. 30 analysis for the website 38 North that the Hwasong-15 could “deliver a moderately-sized nuclear weapon to any city on the U.S. mainland.” Further, the missile is large and powerful enough to carry decoys or countermeasures that would complicate U.S. missile defense efforts, he said.

Elleman also noted improvements on the Hwasong-15 that would give the North Korean weapon additional accuracy. The missile could be fitted with a postboost control system that could be used to adjust the payload’s velocity and positioning, he said.

When asked about the test, U.S. President Donald Trump told reporters on Nov. 28 that the United States “will deal with it.”

The KCNA announcement said that the test accomplished the “historic cause of completing the state nuclear force” and that North Korea had attained its goal of “completing the rocket weaponry system development.”

A South Korean official told Arms Control Today on Dec. 19 not to read too much into the use of the word “complete.” The official said that North Korea is likely directing that comment at a domestic audience because leader Kim Jong Un set the goal of completing the nuclear arsenal in his Jan. 1, 2017, speech. The officials said that “completion” should not be interpreted as an end of tests.

Many experts and officials assess that North Korea will need to conduct additional tests to demonstrate the reliability of the ICBM. There are continuing doubts about whether North Korea has the technology to ensure that a warhead would survive re-entry into the atmosphere.

Mattis told reporters on Dec. 15 that the Hwasong-15 “has not yet shown to be a capable threat against us right now.” Yeo Suk-joo, South Korean deputy minister for defense policy, said on Dec. 1 that North Korea still needs to prove re-entry and warhead activation.

Elleman made a similar point, noting that more testing is necessary to validate the missile’s performance and verify the re-entry system to ensure that the warhead survives re-entry into the atmosphere. If North Korea is willing to accept “low confidence in the missile’s reliability,” Kim Jong Un could declare the Hwasong-15 combat ready after two or three additional tests, he said.

South Korea responded to the missile test by launching its own precision-strike missiles six minutes after the North Korean test. The South Korean response included army, navy, and air force systems, likely demonstrating that the country’s intelligence agencies detected preparations for the test.

South Korean President Moon Jae-in described the North Korean test as a “reckless provocation” and warned that Pyongyang’s actions may drive the United States to consider a pre-emptive strike against North Korea.

Moon’s concerns about a pre-emptive or preventative strike were reinforced by several U.S. policymakers. U.S. Ambassador to the UN Nikki Haley said that the test brought “the world closer to war” and although the United States does not seek a military conflict, “if war does come, it will be because of continued acts of aggression,” such as the ICBM test.