The Mine Ban Treaty added two new members in December, as the convention marked 20 years since it was opened for signature. During their annual meeting, states-parties welcomed progress and addressed rising casualties, while reasserting a collective goal to meet the treaty’s obligations to the fullest extent possible by 2025. 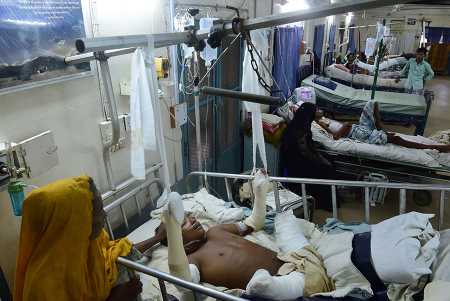 Sri Lanka acceded to the treaty Dec. 13, five days before the Dec. 18-21 meeting of states-parties held in Vienna. The Palestinian delegation announced its intention to accede as a states-party during the meeting, completing the process Dec. 29. The treaty will enter into force for both on June 1, bringing the convention to 164 states-parties.

At the meeting, delegations reacted to a report that casualties from landmines, cluster munition remnants, and other remnants of war had risen to at least 8,605 in 2016, the second year of sharp increases from the 3,993 casualties identified in 2014. The 2016 toll was near the number recorded in 1999, when the treaty entered into force. Much of the increase was due to mines used in armed conflicts in countries such as Afghanistan, Libya, Ukraine, and Yemen, according to the annual “Landmine Monitor” report. The International Campaign to Ban Landmines, a civil society coalition, released the report just prior to the meeting.

The use of landmines by armed forces in Myanmar along border crossings with Bangladesh and the resulting harm to fleeing Rohingya civilians drew international attention and outcry in 2017. The report identified Myanmar and Syria, neither of which is party to the treaty, as the only countries where it could be confirmed that government forces used landmines in the year prior to the meeting. Nonstate armed groups were responsible for much of the new use of mines, often improvised devices, in at least nine countries. Certain victim-activated improvised explosive devices are considered to fall under the treaty’s definition of anti-personnel landmines, which detonate due to “the presence, proximity or contact of a person.”

In response, delegates adopted a final report that again condemned any use of landmines. “On the 20th anniversary, there is no time for complacency,” said Austria’s Thomas Hajnoczi, who served as president of the meeting.

Approximately 60 countries have landmine contamination, more than half of which are states-parties to the treaty. During the meeting, delegates welcomed a declaration from Algeria that it had completed clearance, and they granted extension requests to five countries. Under the treaty, states have 10 years to clear contamination, but extensions are possible. The meeting also welcomed a declaration from Belarus that it had completely destroyed its stockpile of landmines, after it had missed its four-year deadline in 2008. In total, states-parties have destroyed more than 53 million anti-personnel landmines.

The United States, not party to the treaty, again attended the meeting as an observer as it has done since 2009. During the meeting, Steve Costner, deputy director of the Office of Weapons Removal and Abatement at the U.S. State Department and head of the U.S. delegation confirmed to Arms Control Today that the U.S. landmine policy has remained unchanged. That policy, announced in 2014, disavowed production and acquisition of landmines prohibited by the treaty, permits their use only on the Korean peninsula, and set a goal to “ultimately comply with and accede” to the treaty. (See ACT, October 2014)

Suraya Dalil, Afghanistan’s ambassador to Switzerland and the United Nations in Geneva, will preside over the 2018 meeting, scheduled for Nov. 26-30 in Geneva. In concluding his statement, Hajnoczi said that “given the remaining challenges, redoubling our efforts to fulfill the aspiration is imperative to achieve a world free of anti-personnel mines by 2025.”