Sanctions relief was a key topic of discussion at a regular meeting between Iran and six countries on implementation of the nuclear deal known as the Joint Comprehensive Plan of Action (JCPOA). 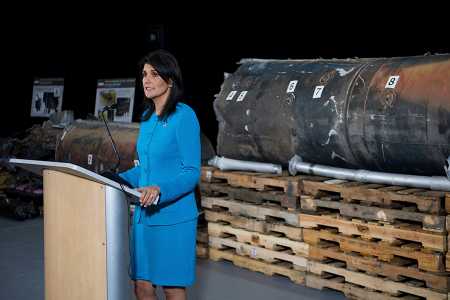 The quarterly meeting of the Joint Commission, the body set up by the JCPOA to oversee the nuclear deal and comprised of representatives from all seven states and the European Union, was chaired by Helga Schmid, secretary-general of the European External Action Service, and held on Dec. 13.

Ahead of the meeting in Vienna, Behrouz Kamalvandi, spokesman for the Atomic Energy Organization of Iran, said that banks and companies are “afraid” of doing business with Iran because of U.S. actions and that this issue would be a main point of discussion. In a statement following the meeting, Schmid said the participants “extensively reviewed progress” on lifting sanctions and noted that a working group on sanctions had met the previous day.

Iranian Deputy Foreign Minister Abbas Araqchi, who headed Iran’s delegation to the meeting, told reporters that the body needs to deal “more assertively” with what he described as U.S. noncompliance with the nuclear accord. All members of the Joint Commission raised concerns about the United States “very explicitly” and stressed the importance of Washington continuing to meet its commitments, he said.

Schmid’s public statement did not specifically mention the United States, saying that all participants “recalled the need for continued implementation of sanctions lifting to allow for the effective realization of the benefits envisioned under the JCPOA.” Her statement also noted the value of addressing challenges related to sanctions relief in forums set up by the accord.

Schmid’s statement said that the states welcomed the news that the International Atomic Energy Agency, in its quarterly report in November, again “confirmed Iran’s continued adherence” to its nuclear-related commitments. The parties also welcomed the work done to advance implementation of Annex III, which lays out recommendations for cooperation between Iran and other states on civil nuclear activities, according to the statement.

Although her statement did not reference specific activities, EU and Iranian representatives met in Isfahan on Nov. 21-22 for the second high-level seminar on nuclear cooperation.

A joint statement released on Nov. 22 said that Iran and the EU discussed the latest developments in nuclear governance, including nuclear safety, nuclear liability, and spent fuel management, and agreed to hold a workshop on nuclear liability and insurance in 2018. The statement noted the cooperative projects that were underway, including stress tests at the Bushehr reactor and a feasibility study on the establishment of a nuclear safety center in Iran.

The biannual report is required under UN Security Council Resolution 2231, which endorsed the nuclear deal and laid out restrictions on Iran’s missile and conventional weapons activities.

The report noted that Saudi Arabia, in a letter to the Security Council president and UN secretary-general, said that Iran had a role in manufacturing the missiles launched at its territory from Yemen in July and November 2017 in “flagrant violation” of council resolutions. Under Resolution 2231, Iran is prohibited from selling or transferring ballistic missiles or certain missile-related items without the prior approval of the Security Council. Iran denied the allegations as “baseless and unfounded.”

The report noted that the UN Secretariat examined the debris from the missiles and concluded that the diameter was “consistent” with that of the Scud models and that components bore a logo similar to an Iranian entity designated by Resolution 2231. The report said that the secretariat is still analyzing the information and material and will report back to the council.

U.S. Ambassador to the UN Nikki Haley displayed at the UN on Dec. 14 what she said were parts of the missile launched at Riyadh and remarked on similarities to Iran’s Qiam missile. She said that there are “many pieces of evidence that tell us of this missile’s Iranian origins.” The U.S. intelligence community has concluded “unequivocally” that the missile was supplied by the Iranian regime in violation of Resolution 2231, she said.

According to the report, the secretariat is also investigating possible violations of Resolution 2231 requirements that prohibit Iran from transferring certain conventional armaments without prior approval from the Security Council. The report encouraged all states to continue to support and implement the nuclear deal and specifically called on the United States to “maintain its commitments.”