States-parties to the Chemical Weapons Convention (CWC) at their annual meeting late last year welcomed progress on stockpile destruction in several states that possess chemical weapons, but continued to argue over chemical weapons use in Syria and express concern over emerging chemical threats. The meeting, also known as the Conference of States Parties, elected the next director-general of the Organization for the Prohibition of Chemical Weapons (OPCW), which implements the CWC. 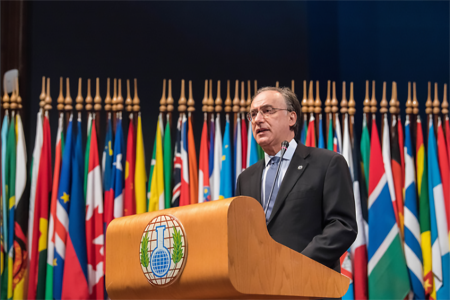 The growing divide between the United States and Russia on the use of chemical weapons in Syria sparked heated debate, but had little impact on the outcome of the Nov. 27-Dec. 1 conference.

U.S.-Russian tensions over chemical weapons attacks in Syria have reached a new high after several attempts to extend the mandate of a body investigating the attacks failed at the UN Security Council in November, largely due to Russia’s vetoes. (See ACT, December 2017.) The Joint Investigative Mechanism (JIM) had been established previously by the United Nations and the OPCW to determine responsibility for chemical weapons use in Syria. The JIM investigates cases of chemical weapons use in Syria, which are confirmed by an OPCW fact-finding mission.

Andrea Hall, senior director for weapons of mass destruction at the U.S. National Security Council, said in her opening address to the conference that the fact-finding mission has an additional 60 cases to investigate. In 2017, the JIM determined that the Syrian government used sarin gas in Khan Sheikhoun and that the Islamic State used sulfur mustard gas in Um-Housh. (See ACT, November 2017.)

Russia continued to oppose the accusations against its ally, the Assad regime in Syria. Gregory Kalamanov, deputy minister of the Russian Ministry for Industry and Trade, in his remarks called the allegations against Syria “unfounded,” arguing that it was being subjected to a “double standard” and that the countries that supported JIM’s findings were “acting on their own political interests.”

Belarus, with Russian backing, introduced a joint statement calling for the depoliticization of the OPCW, arguing that investigations should be based on “objective and thoroughly verified evidence.” The document was not adopted, but prompted a lengthy and heated exchange involving, among others, Russia, Syria, and the United States.

At the conference, Venezuela unsuccessfully put itself forward as the fifth candidate for the four-person delegation to represent Latin American and Caribbean countries in the OPCW Executive Council starting in May 2018. The unusual move was likely an effort to tilt the balance in the council in favor of Russia and Syria, Jean Pascal Zanders, an independent researcher attending the conference, told Arms Control Today in a Dec. 18 interview.

In an unprecedented secret ballot involving all states parties attending the Conference of States Parties, Venezuela was soundly rejected in favor of the four candidates already selected by the Latin American and Caribbean group as its representatives. Still, several states-parties afterwards expressed concern about the precedent set by Venezuela’s actions, adding that the selection of candidates for the Executive Council should be a decision for the regional groups only.

A joint paper issued by 39 countries presented concerns about the emergence of aerosolized chemical weapons that target the central nervous system. These states maintain that such chemicals, which include anesthetics, sedatives, and analgesics, are different from riot control agents, which produce temporary “sensory irritation or disabling physical effects” and are allowed for law enforcement purposes under the CWC. The paper may signal an effort to put the item back on the agenda for the upcoming CWC review conference, Zanders told Arms Control Today.

South Sudan, one of four countries not party to the treaty, announced that it had completed an internal review that green-lights its accession to the accord. Moses M. Akol Ajawin, director-general for international cooperation in the South Sudanese Ministry of Foreign Affairs and International Cooperation, announced that the country’s Council of Ministers had resolved on Aug. 25, 2017, to “approve membership in the OPCW,” adding that South Sudan “looks forward to becoming the newest and youngest” state-party.

Fernando Arias of Spain was officially elected with widespread support as the next OPCW director-general. Arias currently serves as Spain’s permanent representative to the OPCW and was previously Spain’s permanent representative to the United Nations. During his candidacy for the post, he pledged to work to prevent the re-emergence of chemical weapons, fight chemical terrorism and engage in public outreach. The Executive Council chose Arias as the final candidate in October from an original field of seven candidates. (See ACT, November 2017.) He begins his four-year term on July 25.