An excerpt from the 2017 Nobel Peace Prize presentation speech by Berit Reiss-Andersen, chair of the Norwegian Nobel Committee, given December 10 in Oslo.

In awarding this year's peace prize to the International Campaign to Abolish Nuclear Weapons (ICAN), the Norwegian Nobel Committee seeks to honor this remarkable endeavor to serve the interests of mankind. 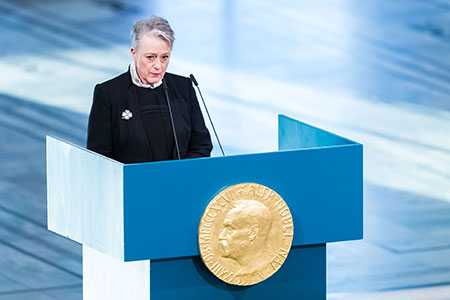 The Nobel Committee believes that an international ban on nuclear weapons will be an important, possibly decisive step on the road to a world without nuclear weapons. Such a goal is fully consistent with the essence of Alfred Nobel's will.

Ladies and gentlemen, ICAN's support for a global ban on nuclear weapons is not uncontroversial. We must acknowledge that the treaty has powerful opponents, but the idea of prohibiting and abolishing nuclear weapons is neither naïve nor new. As early as 1946, in the UN General Assembly's very first resolution, the United Nations called for nuclear disarmament and an international nuclear weapons control regime.

At the Reykjavik summit in 1986, [Soviet leader] Mikhail Gorbachev and [U.S. President] Ronald Reagan tried to halt the spiraling nuclear arms race between the two superpowers and came close to concluding an agreement to abolish all long-range nuclear missiles. A year and a half earlier, President Reagan had addressed the people of the United States and the Soviet Union directly, saying, “A nuclear war cannot be won and must never be fought. The only value in our two nations possessing nuclear weapons is to make sure they never will be used. But then, would it not be better to do away with them entirely?”

Today, it is more important than ever to support this vision. While the global community may trust that no responsible head of state would ever order another nuclear attack, we have no guarantees that it will not happen. Despite international legal commitments, irresponsible leaders can come to power in any nuclear-armed state and become embroiled in serious military conflicts that veer out of control.

Ultimately, nuclear weapons are controlled by human beings. In spite of advanced security mechanisms and control systems, technical and human errors can occur, with potentially catastrophic consequences. Can we be sure that the control systems of the nuclear powers will not someday be sabotaged by hackers acting on behalf of hostile states, terrorists, or extremists?

In short, nuclear weapons are so dangerous that the only responsible course of action is to work for their removal and destruction.

Many people think that the vision of a nuclear-weapon-free world, a Global Zero, is utopic or even irresponsible. Similar arguments were once used to oppose the treaties banning biological and chemical weapons, cluster weapons, and landmines. Nonetheless, the prohibitions became reality, and most of these weapons are far less prevalent today as a result. Using them is taboo.

Ladies and gentlemen, the Norwegian Nobel Committee is aware that nuclear weapons disarmament presents far greater challenges than disarmament of the types of weapons I just mentioned. But there is no getting around the fact that the nuclear-weapon states have committed, through the [nuclear] Nonproliferation Treaty, to work toward disarmament. This is the ultimate objective of the treaty. Through its efforts, ICAN has reminded the nuclear-weapon states that their commitment entails a genuine obligation, and the time to honor it is now!

The people of ICAN are impatient and visionary, but they are not naïve. ICAN recognizes that the nuclear-armed states cannot eliminate their nuclear weapons overnight. This must be achieved through a mutual, gradual, and verifiable disarmament process.

But it is the hope of ICAN and the Norwegian Nobel Committee that an international legal ban and broad popular engagement will put pressure on all nuclear-armed states and expedite the process.

The full speech is available at https://www.nobelprize.org/

A U.S. Nuclear Strategy for the Biden Administration