Iran denounced U.S. congressional action to extend sanctions against the country as a violation of the nuclear deal it negotiated with the United States and its partners.

The sanctions, set to expire at the end of 2016, were extended for 10 years. As part of the nuclear deal, Washington is waiving certain sanctions on Iran, including provisions of the Iran Sanctions Act, in return for limitations on Iran’s nuclear activities. 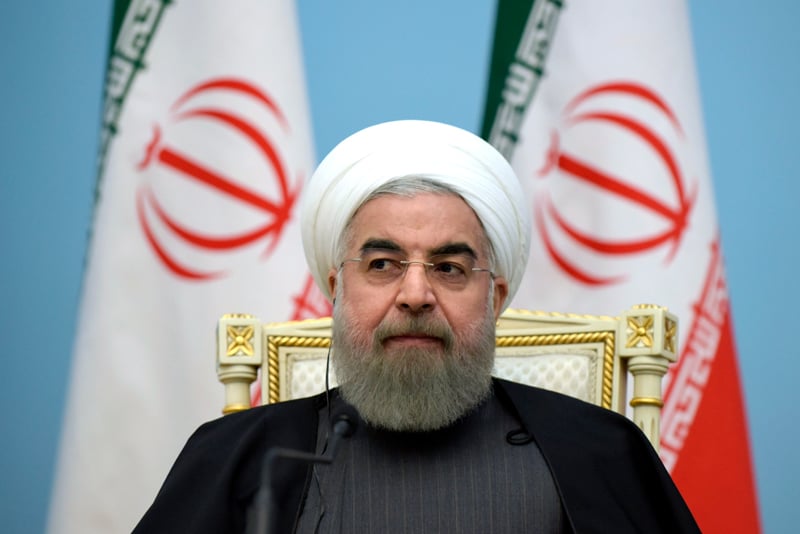 Iranian President Hassan Rouhani attacked the extension as a “gross violation” of the nuclear accord and said that Iran would “firmly respond.”

The nuclear deal, known as the Joint Comprehensive Plan of Action, prohibits the United States from imposing new nuclear-related sanctions on Iran or reintroducing sanctions that were lifted as part of the deal. Proponents of the extension assert that extending the existing sanctions does not constitute new restrictions. Rep. Ed Royce (R-Calif.), the sponsor of the extension legislation, said on Dec. 15 that adoption “ensures the U.S. retains its ability to hold the [Iranian] regime accountable.”

The Obama administration maintained that the 10-year extension of the Iran Sanctions Act was unnecessary, but said the action does not violate U.S. commitments under the nuclear deal. U.S. Secretary of State John Kerry said that the extension was not necessary for accountability to the nuclear deal and that, had the act had expired, the administration “would continue to have all the authorities” needed to reimpose sanctions quickly.

Despite President Barack Obama’s assurance that the measure was not needed to snap sanctions back into place in the event of an Iranian violation of the deal, Congress overwhelmingly supported the extension. The legislation passed 419-1 in the House of Representatives on Nov. 15 and 99-0 in the Senate on Dec. 1.

The bill officially became law on Dec. 15, after Obama in a symbolic move chose not to sign it. When Congress is in session, the president has 10 days to sign or veto any legislation sent to the White House. If the president takes no action during that period, as in this case, the bill becomes law.

Kerry said that the extension “does not affect in any way the scope of the sanctions relief” nor the ability of companies to do business in Iran consistent with the nuclear deal. Kerry said he renewed the sanctions waivers required by the nuclear deal on Dec. 15, even though the existing waivers were not impacted by the Iran Sanctions Act renewal, “to ensure maximum clarity and convey to all stakeholders that the United States will continue to uphold our commitments” under the deal.

President-elect Donald Trump will need to continue waiving sanctions on Iran to meet U.S. commitments under the nuclear agreement. Waivers typically last 120 or 180 days, but can be reissued early. If Kerry does not reissue the waivers before Obama leaves office, the earliest the Trump administration would need to reauthorize the waivers is mid-April.

Trump has not articulated his approach to the Iran accord since being elected president, although he criticized the “disastrous deal” on the campaign trail. His advisers have expressed a range of opinions, with some calling for scrapping the deal and others for vigorously enforcing its provisions. (See ACT, December 2016.)

Despite assertions by Obama and Kerry that the extension of the Iran Sanctions Act is consistent with U.S. obligations under the deal, Iranian officials called it a violation and took steps to respond.

Iran on Dec. 16 called for a meeting of the joint commission established by the nuclear deal to discuss the implications of the U.S. action. Any participant in the nuclear deal (China, the European Union, France, Germany, Iran, Russia, the United Kingdom, and the United States) can request a meeting of the commission at any time, and the coordinator has one week to convene the participants. That body has a working group on issues related to lifting sanctions.

Rouhani announced on Dec. 13 that Iran would begin researching and developing nuclear propulsion for marine vessels. Specifically, he called for the Atomic Energy Organization of Iran (AEOI) to “plan the design and construction of a nuclear propeller to be used in marine transportation.” White House Spokesperson Josh Earnest said the announcement “does not run counter” to the deal.

Ali Akbar Salehi, head of the AEOI, said he discussed the plans with International Atomic Energy Agency (IAEA) Director-General Yukiya Amano during Amano’s visit to Tehran on Dec. 18. Salehi said the work on marine propulsion will be conducted within the framework of the nuclear deal and consistently with IAEA safeguards.

Salehi said he spoke with Amano about how the project will fit within the IAEA framework. The IAEA statement on the meeting confirmed that Amano sought clarification about Iran’s plans for marine nuclear reactor research.

Under the nuclear deal with the United States and other world powers, Iran is prohibited from enriching uranium to a level higher than 3.67 percent for 15 years. Naval nuclear reactors typically require fuel with a higher level of uranium enrichment. China, for instance, operates naval reactors with uranium enriched to 5 percent, and the United States uses weapons-grade enriched uranium (greater than 90 percent) for its naval reactors.