President-elect Donald Trump tweeted in December that the United States “must greatly strengthen and expand its nuclear capability” and later told a television host that he would “outmatch” and “outlast” other potential competitors in a nuclear arms race.

The comments mostly prompted condemnation and concern in the United States and around the world. Trump tweeted on the morning of Dec. 22 that an expansion would be required “until such time as the world comes to its senses regarding nukes.” 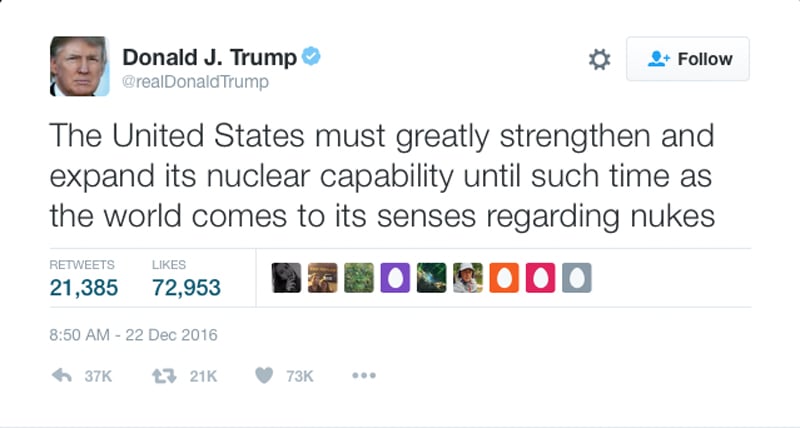 Increasing the arsenal would constitute a fundamental departure from U.S. policy and could prompt similar efforts by other nuclear-armed countries.

Since the end of the Cold War, the United States has reduced the size of its arsenal, including through arms control agreements with Russia, from roughly 19,000 operational warheads in 1991 to 4,571 as of September 2015, according to U.S. government figures. The United States has begun a program to sustain and upgrade the arsenal at a cost that could reach and possibly exceed $1 trillion over the next 30 years.

It is unclear what Trump has in mind, as aides offered interpretations seemingly at odds with his words. Jason Miller, at the time a top spokesman for the Trump transition, said in a statement later that day that the president-elect was referring to “the threat of nuclear proliferation and the critical need to prevent it, particularly to and among terrorist organizations and unstable and rogue regimes.” During the campaign, Trump had “emphasized the need to improve and modernize [the U.S.] deterrent capability as a vital way to pursue peace through strength,” he added.

Despite Miller’s attempt at clarification, Trump seemed to reiterate a willingness to expand the U.S. arsenal in a Dec. 23 telephone conversation with cable news channel MSNBC host Mika Brzezinski. When asked to explain what Trump meant by his tweet, Brzezinski said the president-elect told her, “Let it be an arms race. We will outmatch them at every pass and outlast them all.”

Transition aides again scrambled to interpret Trump’s comments. Incoming White House Press Secretary Sean Spicer told NBC that “[i]f another country wants to expand their nuclear capability,” Trump would “not…sit back and allow them to undermine our safety, our sovereignty.”

“He is going to match other countries and take action,” Spicer said. He added that there would not be a new arms race because Trump will ensure that countries such as Russia understand the president-elect’s resolve and “they will come to their senses.”

In a press conference on Dec. 23, Russian President Vladimir Putin said that “there is nothing unusual” about what Trump tweeted because, during the campaign, “he talked about the need to strengthen the U.S. nuclear capability and armed forces.”

Putin added that the United States had already “paved the way to a new arms race by withdrawing from the [1972] Anti-Ballistic Missile Treaty” and expanding its missile defense capabilities, which prompted Russia to respond by building “efficient means of overcoming this missile defense system and improving its own” offensive nuclear forces.

But Putin said that Russia “will never be dragged into an arms race to spend more than we can afford,” noting that Russian spending on defense would drop from 4.7 percent of gross domestic product in 2016 to 2.8 percent by 2019.

During the election campaign, Trump expressed a desire to improve the U.S. relationship with Russia, but did not say whether he would seek to engage in further bilateral arms control beyond the 2010 New Strategic Arms Reduction Treaty.

China is “paying close attention” to Trump’s nuclear pronouncements and declared that the “countries that have the largest nuclear arsenals should bear special responsibility for nuclear disarmament,” said a spokesperson for the Chinese Foreign Ministry. That was a reference to the United States and Russia, which together possess more than 90 percent of the estimated 15,500 nuclear warheads worldwide.

U.S. policy on nuclear weapons “is not something that should be altered with a dangerously vague tweet,” Rep. Adam Smith (D-Wash.), the ranking member on the House Armed Services Committee, wrote in a Dec. 24 post on his Facebook page. “The fact is we do not need another nuclear arms race. We have too many nuclear weapons as it is—nearly 5,000—more than enough to meet our national security needs and deter any major adversary.”

Some Republicans were also dismayed by Trump’s tweet. Outgoing Rep. Reid Ribble (R-Wis.) told Politico on Dec. 23 that “the general consensus among my colleagues in Congress is that the world is safer with fewer nuclear weapons than more.”