India conducted a successful fourth flight test of its Agni-5 ballistic missile, a nuclear-capable system likely able to reach the range for classification as an intercontinental ballistic missile (ICBM).

According to a press release from the Indian Defence Ministry, the Dec. 26 launch tested the full range of the Agni-5 and successfully achieved all mission objectives. The release said that the flight test “further boosted the indigenous missile capabilities and deterrence level of the country.” 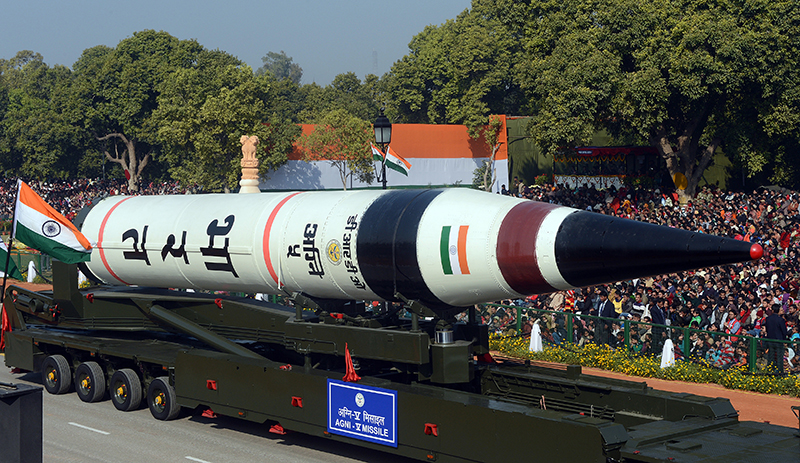 The Agni-5 is a road-mobile, three-stage, solid-fueled ballistic missile believed to be capable of carrying a 1,500 kilogram warhead an estimated 5,000-5,800 kilometers. The threshold for ICBM classification is 5,500 kilometers.

The Indian Defence Research and Development Organization, which developed the Agni-5, will not give an exact range for the system, but has said publicly that it is more than 5,000 kilometers. That distance would put within range all of China, a nuclear-armed neighbor that New Delhi views as a threat. The two fought a brief border war in 1962 and have continuing territorial disputes.

Hua Chunying, spokesperson for the Chinese Foreign Ministry, at a Dec. 27 press conference cited nonbinding UN Security Resolution 1172, which in 1998 called on India and Pakistan to “cease development of ballistic missiles capable of delivering nuclear weapons.” Beijing maintains that “preserving the strategic balance and stability in South Asia is conducive to peace and prosperity of regional countries,” Hua said.

The Indian Ministry of External Affairs rebutted the implication that India was not complying with the UN resolution and said India “abides by all” applicable international obligations.

The missile was tested from Dr. Abdul Kalam Island, off the eastern coast of India in the Bay of Bengal. The first Agni-5 test took place in 2012, and the most recent before the December launch was in January 2015. (See ACT, March 2015; May 2012.)