By Kingston Reif and Kelsey Davenport

The United States and South Korea have agreed that the United States will deploy an advanced missile defense system on the Korean peninsula to counter North Korea, a plan that is drawing strong objections from China and vocal domestic opposition in South Korea.

The two allies described the decision to deploy a Terminal High Altitude Area Defense (THAAD) battery “as a defensive measure to ensure the security” of South Korea and “to protect alliance military forces from North Korea’s weapons of mass destruction and ballistic missile threats,” according to the July 8 joint announcement of the agreement. Seoul’s aim is to have the system operational by the end of 2017. 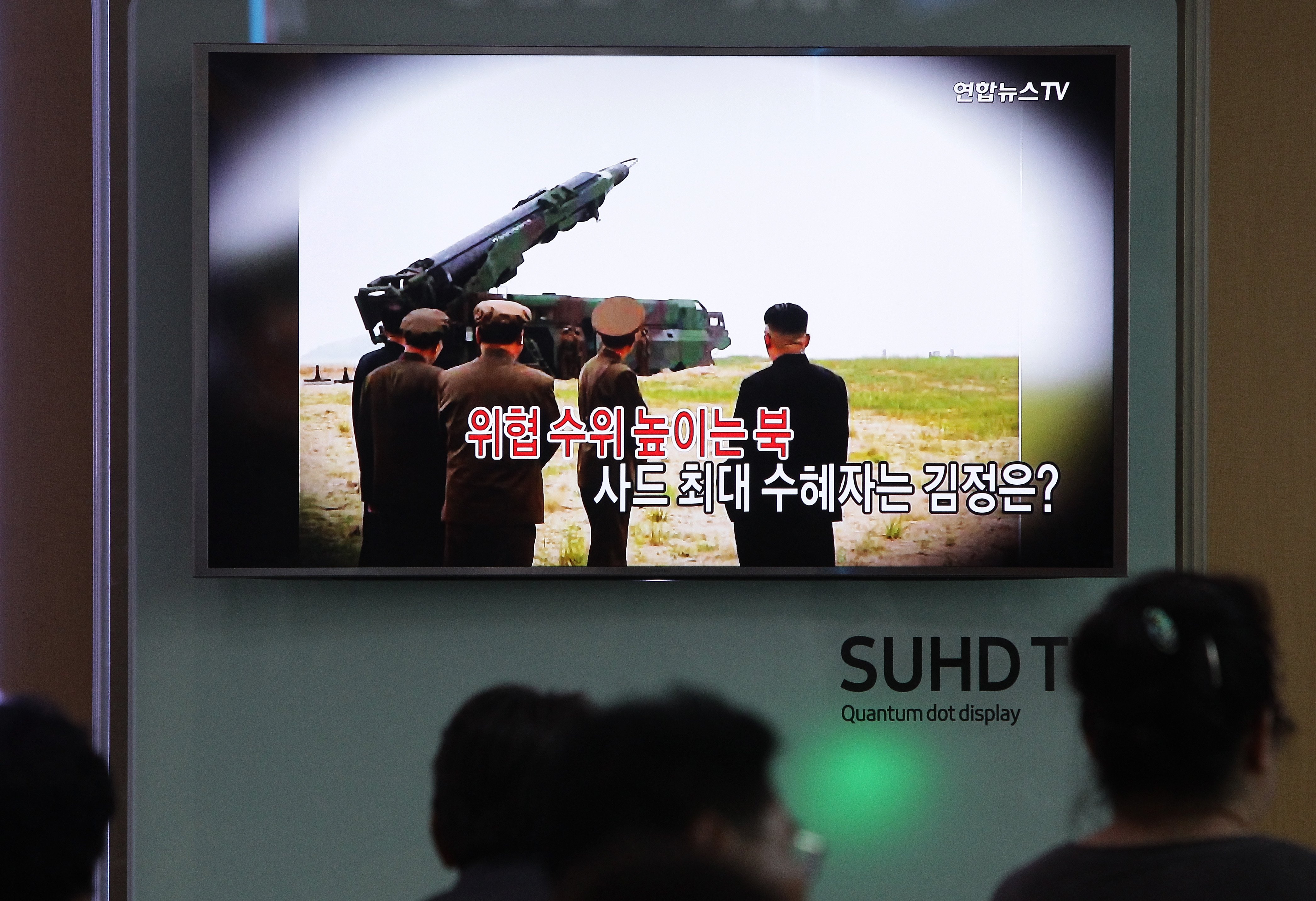 Formal talks about deployment began in early February “in response to the evolving threat posed by North Korea,” according to the announcement. In January, North Korea conducted its fourth nuclear test, which had a yield of about 10 kilotons. (See ACT, March 2016.) North Korea is also developing nuclear-capable ballistic missiles with longer ranges and tested K-11 submarine-launched ballistic missiles (SLBMs) on July 9 and Aug. 23.

Three days after the U.S.-South Korean announcement, North Korea’s military threatened to respond to the THAAD deployment with “physical response measures,” including “a ruthless retaliatory strike” against South Korea.

The mobile, ground-based THAAD system is designed to defend against short- and medium-range ballistic missiles in the middle and end stages of flight. A THAAD battery consists of interceptor missiles, launchers, a radar, a fire control and communications system, and other support equipment. A battery can hold between 48 and 72 interceptors. The THAAD system has completed 13 successful flight and interception tests since 2006, according to the U.S. Missile Defense Agency (MDA).

The THAAD system is intended to complement the Patriot system, which can intercept ballistic missiles at low altitudes and at short distances from its location, and the sea-based Aegis system, which can only intercept ballistic missiles outside the atmosphere. South Korea and the United States already deploy a mix of Patriot systems and Aegis ships in defense of the Korean peninsula.

The battery will be operated by United States Forces Korea. The South Korean Defense Ministry said on July 13 that the battery would “better protect” one-half to two-thirds of South Korea’s citizens “from North Korean nuclear and missile threats.”

The defense ministry initially announced that the THAAD battery would be deployed at a military base in the southeastern county of Seongju, about 180 miles southeast of Seoul. But thousands of residents of Seongju county have demonstrated against the plan, citing concerns that the radar could pose health and environmental dangers and expressing frustration that the county was not consulted before the deployment decision.

On Aug. 22, the defense ministry said it will review alternative locations to deploy the battery.

“China will take corresponding measures to safeguard its interests” in response to the deployment, Lu added. He did not specify what form such steps might take. 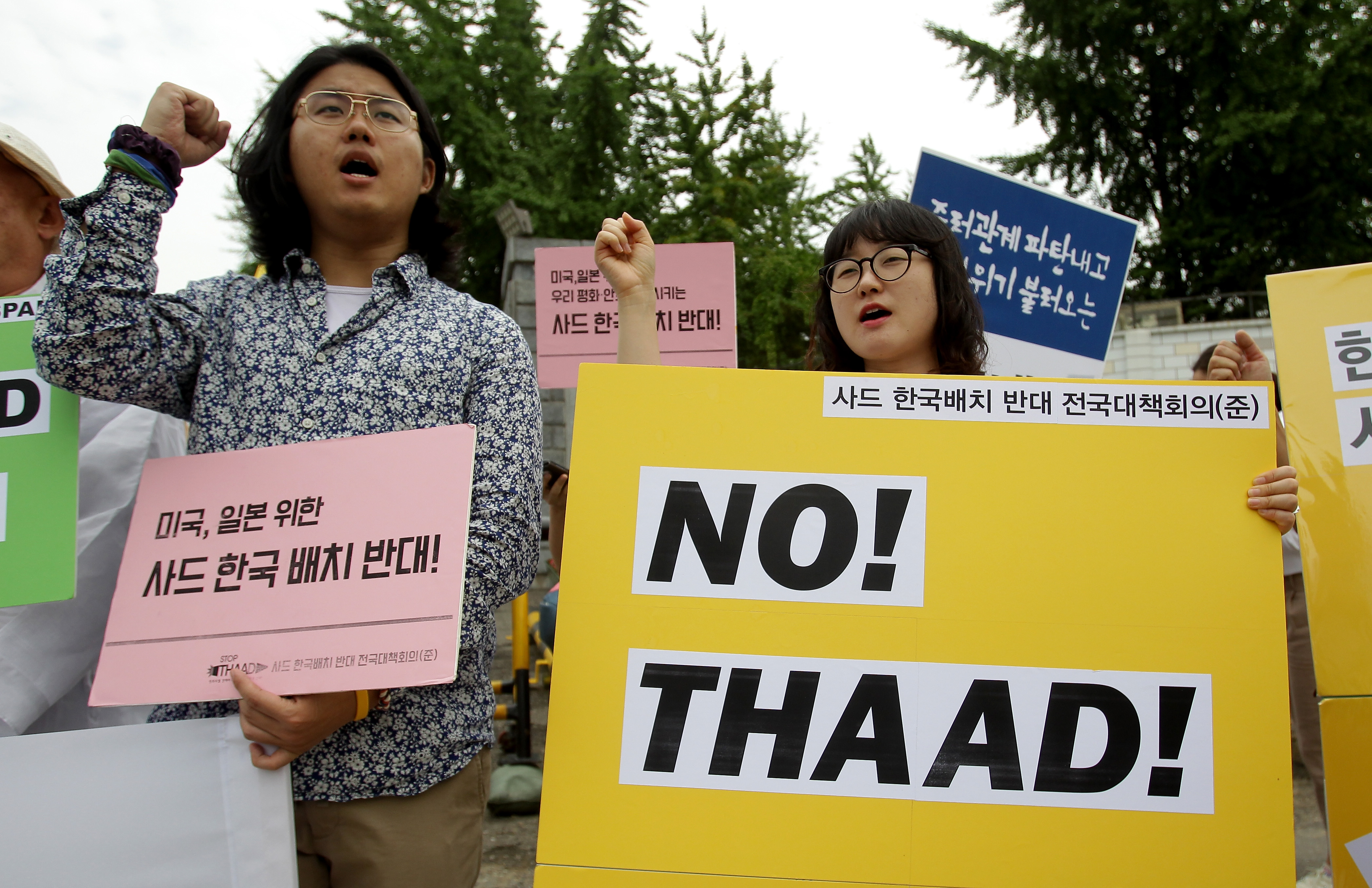 Chinese officials have said that the THAAD system’s radar could be configured to detect and track missiles launched from China, thereby increasing the capability of U.S. missile defenses against China.

In an Aug. 11 press conference in Seoul, U.S. Navy Vice Adm. James Syring, the director of the MDA, said the THAAD deployment “will not be part of the wider missile defense network that” the agency “has developed and commanders around the world utilize.”

North Korea tested a medium-range ballistic missile in August that landed approximately 125 miles off the coast of Japan in an area Tokyo claims as its economic exclusion zone.

In an Aug. 4 statement, Japanese Prime Minister Shinzo Abe called the test “an intolerable act of recklessness” and said North Korea’s missile activities are a serious threat to Japan.

The Nodong missile, a system North Korea has tested successfully on past occasions, was launched on Aug. 3 from the southwestern tip of the country. It traveled approximately 1,000 kilometers  (620 miles) before landing in the Sea of Japan. A second missile was launched simultaneously, but exploded shortly after launch. These launches followed two Nodong tests in July that were successful but fell short of Japanese waters.

North Korea is prohibited from launching ballistic missiles under UN Security Council resolutions. The Security Council met on Aug. 4 to discuss the launch, but did not issue a statement condemning the missile test due to disagreements over language in the statement.

An official familiar with the discussions told Arms Control Today on Aug. 15 that China wanted language in the Security Council statement saying that any deployment of missile defenses aimed at North Korea would “escalate tensions.” The United States and other members objected.

North Korea’s test launch of a K-11 SLBM took place a day after the THAAD deployment announcement. The missile appears to have exited the water successfully, but exploded after gaining altitude.

North Korea tested another SLBM on Aug. 23 from a submarine based out of Sinpo shipyard in the northeast of the country. The missile flew approximately 500 kilometers before splashing down into the ocean between North Korea and Japan. Although it is unclear what objectives Pyongyang was attempting to achieve with the test, the launch seems to have been successful.