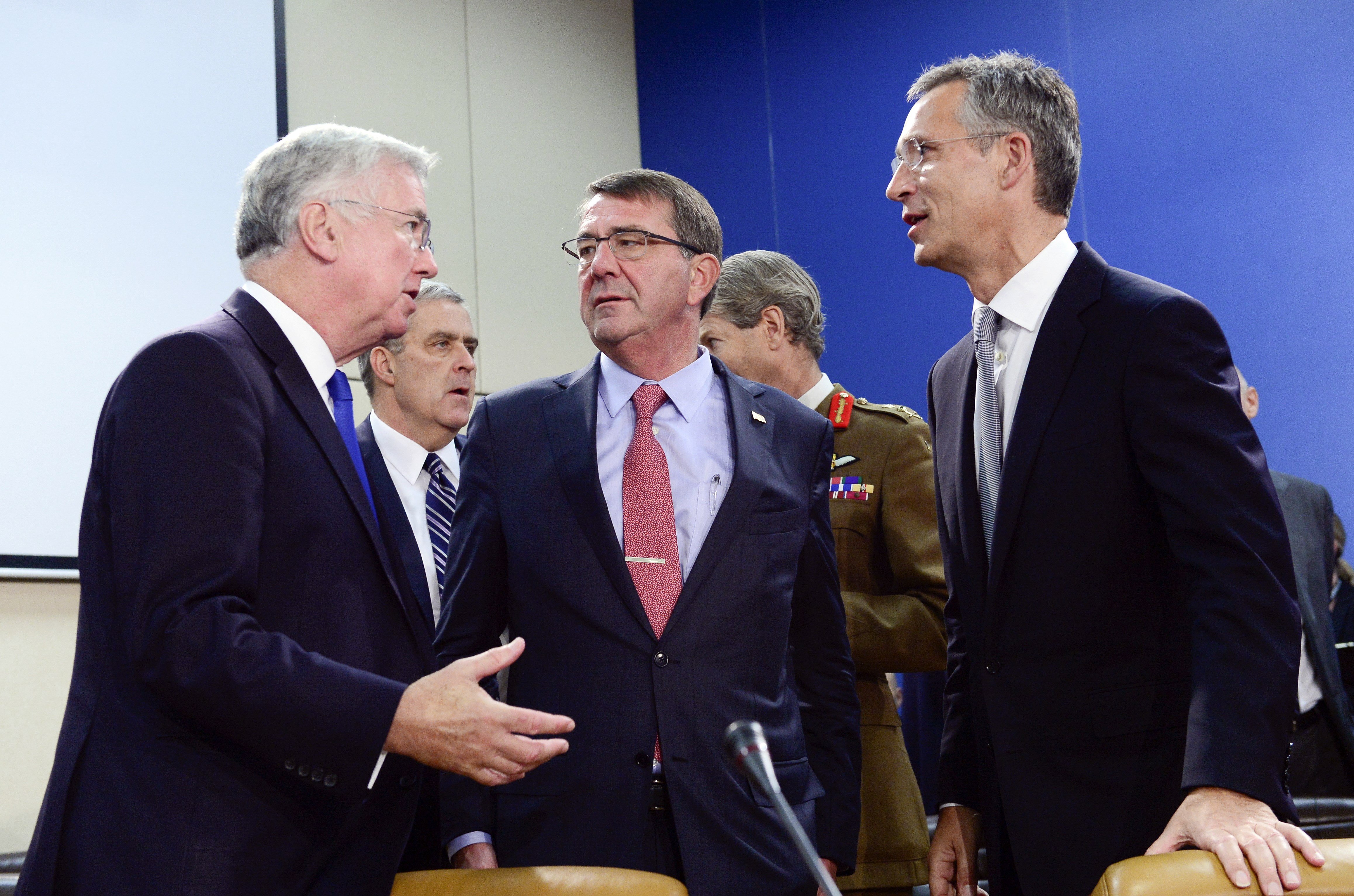 Against the backdrop of heightened Russian nuclear saber rattling, NATO is evaluating how to respond to Russia’s actions, with some alliance members calling for the resumption of certain nuclear exercises.

In comments to reporters on the sidelines of an Oct. 8 meeting in Brussels of defense ministers from NATO member states, Adam Thomson, the UK permanent representative to NATO, said that, since the end of the Cold War, the alliance “has done conventional exercising and nuclear exercising” but has not conducted exercises on “the transition from one to the other.”

“That is a recommendation that is being looked at” within the alliance, he said.

Thomson added that the United Kingdom “see[s] merit in making sure we know how, as an alliance, to transition up the escalatory ladder in order to strengthen our deterrence.”

Similarly, U.S. Defense Secretary Ash Carter said at a separate Oct. 8 press conference that NATO must “write a new playbook” to adapt to the challenges and threats of the 21st century, including “better integrating conventional and nuclear deterrence.”

It is unclear what specific nuclear-related exercises NATO may be considering or what the improved integration of conventional and nuclear deterrence would mean in practice.

In an Oct. 21 e-mail to Arms Control Today, a NATO official said that “we cannot go into detail on our nuclear discussions” as these “are internal and classified matters.”

The official added that the readiness of NATO nuclear forces has not changed.

Asked to elaborate on Thomson’s comments, a UK official said in an Oct. 22 e-mail that “discussions and proposals” on responding to Russian nuclear rhetoric and activities “are developing well” and that “these discussions account for a wide range of capabilities, including nuclear capabilities.”

NATO officials have repeatedly raised concerns about Russian nuclear behavior over the last year. (See ACT, May 2015.) These actions have included more Russian nuclear bomber flights close to the borders of some alliance members, more nuclear exercises, and threats to base nuclear forces in Kaliningrad, the Russian enclave on the Baltic Sea, and Crimea, which Russia annexed from Ukraine last year.

Of particular concern to some alliance members is the apparently increasing degree to which Russia’s military doctrine relies on nuclear weapons. At a House Armed Services Committee hearing on June 25, Deputy Defense Secretary Robert Work said, “Russian military doctrine includes what some have called an ‘escalate to de-escalate’ strategy—a strategy that purportedly seeks to de-escalate a conventional conflict through coercive threats, including limited nuclear use.”

“Anyone who thinks they can control escalation through the use of nuclear weapons is literally playing with fire,” Work added.

Two European analysts speculated that the potential exercises being considered by NATO were tabletop exercises, which are meetings involving key personnel to discuss and test how to respond to a situation.

In an Oct. 21 e-mail, Łukasz Kulesa, research director at the European Leadership Network in London, said that the proposal for new exercises “seems to be a suggestion to introduce Russian nuclear escalation and NATO counter-escalation scenarios into table-top staff exercises at NATO headquarters and into the political-military level exercises with the presence of decision-makers.”

Kulesa added that even if the proposal for new nuclear exercises was adopted, he would not expect that the pattern of already ongoing nuclear exercises or the readiness levels of NATO nuclear forces to change automatically. But “these changes may come later if the table-top exercises show, for example, that NATO’s current posture is totally unsuitable to respond” to the potential “nuclearization” of a crisis involving NATO and Russia, he said.

Jacek Durkalec, nonproliferation and arms control project manager at the Polish Institute of International Affairs, agreed with Kulesa’s assessment. In a separate Oct. 21 e-mail, he commented that the consideration of new exercises was a “step in the right direction.”

He added that including “nuclear scenarios in NATO’s table-top crisis-management exercises would strengthen the ability of NATO’s decision-makers to act effectively during crises.”

Such exercises would not be comparable to “what Russia has been doing in live exercises, where nuclear and conventional forces are closely integrated,” he said.