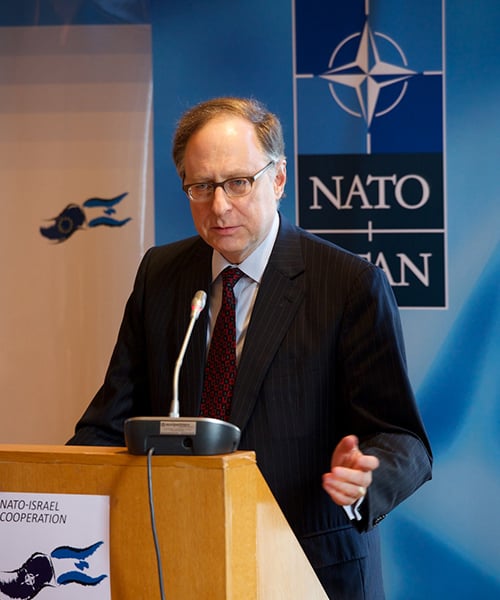 NATO is in the process of determining whether “increased Russian attention to nuclear weapons” should prompt steps such as military exercises “to make sure that there is no doubt about the effectiveness of our deterrent,” Alexander Vershbow, the alliance’s deputy secretary-general, said last month.

“Maybe this is just rhetoric, but it is irresponsible nonetheless,” he added.

Among other recent nuclear threats from Russian officials, Mikhail Vanin, the Russian ambassador to Denmark, said on March 21 that “Danish warships will be targets for Russian nuclear missiles” if Denmark joins NATO’s ballistic missile defense system.

It is unclear what specific nuclear-related steps, if any, NATO may be considering to respond to these threats.

On the issue of NATO’s nuclear policy posture, Vershbow said the alliance members “think we still have an effective posture.”

In an April 10 e-mail, a NATO official said that “NATO does not comment on military contingency planning.”

But the official said that NATO’s Nuclear Planning Group (NPG), which acts as the alliance’s senior body on nuclear matters, convened Feb. 5 during the last meeting of NATO defense ministers. The NPG meetings take place about once a year and “provide an opportunity for Allies to address the safety and effectiveness of our nuclear forces,” he said.

The official added that NATO’s “nuclear readiness levels have not changed since the start of the Ukraine crisis.” Relations between NATO and Russia have deteriorated significantly since Russia’s annexation of Crimea and continued action in eastern Ukraine, resulting in the imposition of Western economic sanctions against Russia. The official also said NATO is not considering the basing of tactical nuclear weapons on the territory of new member states.

On the other hand, he emphasized that “NATO is currently implementing the biggest reinforcement of our collective defence since the end of the Cold War.”

Such steps include increasing NATO’s presence on the territory of the alliance’s easternmost members and doubling the size of the NATO Response Force to up to 30,000 troops. The response force is a multinational force that the alliance can deploy quickly, wherever needed.

“All of this shows that NATO is serious about deterrence, and stands ready to defend all Allies against any threat,” the official said.