“It will take all of us working together – government officials, and diplomats, academic experts, and scientists, activists, and organizers – to come up with new and innovative approaches to strengthen transparency and predictability, reduce risk, and forge the next generation of arms control agreements.”
– Wendy Sherman
U.S. Deputy Secretary of State
June 2, 2022
Getting to Know Alex Wellerstein 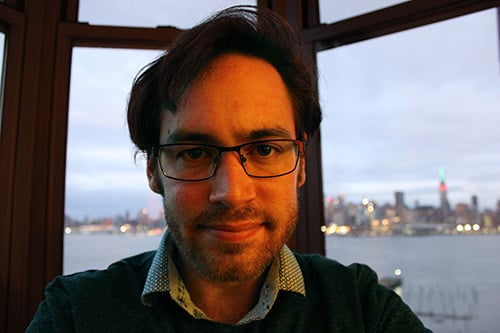 Alex Wellerstein, a professor at the Stevens Institute of Technology in Hoboken, New Jersey, is the creator of NUKEMAP, an interactive website (http://nuclearsecrecy.com/nukemap/) that enables viewers to visualize the impact of detonating a nuclear weapon on their neighbor’s house—or the White House. You can choose among a homemade terrorist bomb, a bomb of the type that devastated Hiroshima, or Russian President Vladimir Putin’s biggest intercontinental ballistic missile. The site then displays the size of the fireball that would incinerate everything in its radius and the larger concentric circles marking the extent of radiation poisoning and third-degree burns, as well as corresponding casualty rates. Since its launch in February 2012, NUKEMAP has been viewed 10 million times.

Arms Control Today caught up with Wellerstein at his campus office. The interview, conducted by Jefferson Morley, has been edited for length and clarity.

How did you get into the whole world of things nuclear? Do you have science in your background?

I’m from central California. My dad was a public defender. My mother did human resources for the state of California. No obvious connections to the world of science, except that my grandfather was one those self-taught, eccentric tinkerers who always thought he could invent the next big thing. I did my undergraduate degree at the University of California, Berkeley. Through a series of coincidences, I found there was a discipline called the history of science. One of the topics I became very interested in and wound up writing my thesis on was the relationship of the University of California to the nuclear weapons laboratories, Livermore and Los Alamos.

I found [Berkeley] to be a wonderful contradiction. You could walk down Telegraph Avenue, and it’s got all these hippies selling patchouli and tie-dye. And above their heads were these giant banners for all the Berkeley Nobel Prize winners, including Ernest Lawrence and Glenn Seaborg—people who worked on the Manhattan Project. I thought what a funny juxtaposition this is.

How did NUKEMAP emerge in your mind?

I actually made a very crude version around 2002 or 2003, but it wasn’t something I could release publicly. There have been other nuclear-weapon simulator-type things on the Internet. NUKEMAP improved on these through many specific user-interface choices. And later, I upgraded all of the underlying scientific calculations. I thought it would be useful for teachers.

I taught a class at Harvard, and one of the things I found hard to convey was the difference between early fission and early thermonuclear weapons. One of my classic examples was to show them what happens if you drop a [20-kiloton] Nagasaki-style bomb on Boston. Well, it punches a hole out of downtown Boston. It irradiates MIT, which the Harvard students like, but Cambridge is mostly OK; it’s far enough away from [the] 20 kilotons that the effects are very mild [there]. Then I show them what happens when you do 10 megatons: the first hydrogen bomb. That takes out the whole Boston metro area out to Concord and Lexington. Harvard is on fire. Everything is on fire. Every time you do this, the students give an audible response. They gasp.

Tom Lehrer’s song “We All Go Together When We Go.” The uplifting side of Armageddon is that you never have to go to anyone’s funeral.

You say you like talking to the teenagers, to people who are new to nuclear issues. Why?

Nuclear weapons have become invisible to people born after the Cold War. People who lived their teenage years throughout the 1980s really felt the bomb was a real element in the world or could be. For people who were born in the 1990s and 2000s, it’s not a variable. They don’t even know [nuclear weapons] are around or exist. But they are around, and they do exist. We need them to be on people’s agendas.