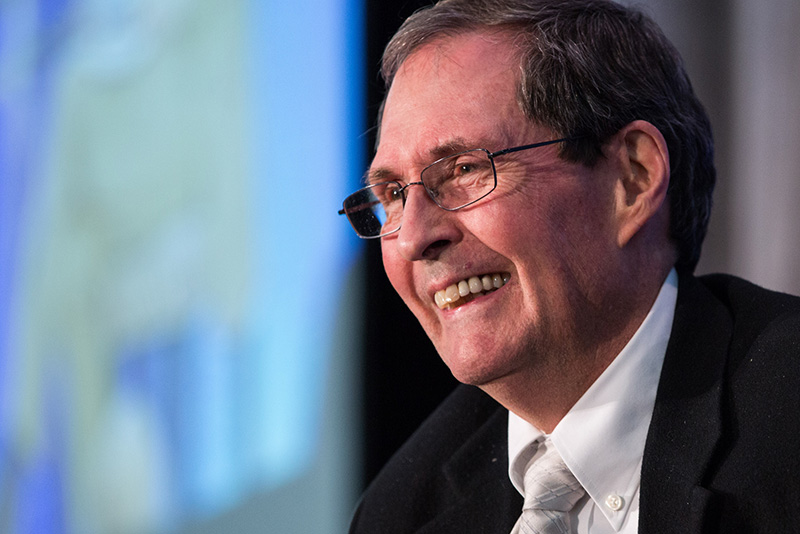 John David Steinbruner, who for decades was a leading international security affairs and arms control scholar and educator, died on April 16 at his home in the woods of northwest Washington, D.C., following his nine-year struggle with multiple myeloma. His wife, Chris Gobin, and other family members were by his side.

John was an insightful and creative thinker, a persistent advocate for sensible security policies, a supportive colleague, and a generous friend and mentor for the many who had the privilege to work with and learn from him.

For nearly two decades, John was a professor of public policy at the University of Maryland and the influential director of the Center for International and Security Studies at Maryland at the university’s College Park campus. He trained and inspired generations of students, many of whom are now leaders in the field.

Beginning in 1991, John became an active member and leader of the Arms Control Association Board of Directors. After becoming chairman of the board in 2000, he oversaw a rejuvenation of the organization, encouraged work on a wider range of weapons-related security threats, and helped guide the organization through the unique challenges that arose after the September 11 attacks.

Well before then, John had already established himself as a leading academic in the field who pushed the boundaries of conventional thinking on the most difficult international challenges.

After receiving his undergraduate degree in psychology from Stanford University, he earned his Ph.D. in political science in 1968 from the Massachusetts Institute of Technology (MIT). In 1974, his doctoral dissertation became his first and very influential book, The Cybernetic Theory of Decision, which explores how policymakers deal with the intense uncertainty and fundamental value conflicts that arise in bureaucratic politics.

After graduate school, John served on the political science and government faculties at MIT, Harvard, and Yale until 1978, when he arrived in Washington to direct the Foreign Policy Studies Program at the Brookings Institution.

Beginning in the late 1970s, his articles and papers helped focus attention on the vulnerability of U.S. and Soviet nuclear command-and-control systems to attack and the potential effects on crisis decision-making. Through the 1980s, along with Brookings colleague Bruce Blair, he helped draw national and international attention to the dangers of the superpowers’ launch-on-warning posture and the attendant risks of catastrophic miscalculation. His last major work at Brookings, Principles of Global Security, stands as a sweeping and insightful analysis of the new factors affecting the post-Cold War global security landscape.

His interdisciplinary thinking was well suited for his work from 1981 to 2004 as a member of the National Academy of Sciences (NAS) Committee on International Security and Arms Control. During this period, the NAS undertook several major studies that were ahead of their time, including the 1997 report “The Future of U.S. Nuclear Weapons Policy.” In the study, Steinbruner and his NAS colleagues outlined a plan for progressive nuclear restraints on global nuclear arsenals and argued for active consideration of “proposals to prohibit the possession of nuclear weapons.”

Through the years, John was often sought out by others for guidance on the dangers of nuclear weapons. Beginning in the early 1980s, he was an informal and later a formal consultant for the U.S. Conference of Catholic Bishops. During that time, the bishops developed their groundbreaking 1983 pastoral letter on the morality of nuclear deterrence, “The Challenge of Peace.” In his last days, John remained keenly interested in the ongoing evolution of the church’s thinking on nuclear weapons and its renewed attention to the issue under Pope Francis.

John was also keen to build bridges and promote dialogue across political and cultural borders. Through the years, he maintained a quiet rapport with leading Russian security specialists who shared his vision for a more cooperative U.S.-Russian relationship.

In 2014, he and his University of Maryland graduate students helped provide advice and support for a historic visit by U.S. Catholic bishops to the Iranian theological center in Qom to discuss the morality of nuclear weapons and the urgency of a comprehensive diplomatic arrangement to limit Iran’s nuclear weapons potential. John was heartened by the recent progress on the issue, which he said was a sign that strategies designed to forge cooperation rather than perpetual confrontation might, in at least one important case, prevail.

John Steinbruner, who brought a common-sense, human perspective to the study and practice of security policy and who inspired others to think in new ways for a better world, will be sorely missed.

ACA and the Coronavirus (COVID-19) Pandemic

Risks and Realities of Extending the UN Arms Embargo on Iran

No One Wins an Arms Race or a Nuclear War