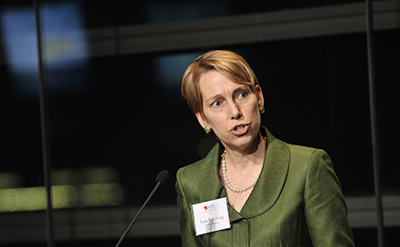 The partnership will strengthen the goals of the nuclear Nonproliferation Treaty while “furthering the role of [non-nuclear-weapon states] in the challenging work of verification of nuclear disarmament,” the State Department said in a statement announcing the launch.

In a Dec. 16 e-mail to Arms Control Today, Corey Hinderstein, NTI vice president for international programs, said the partnership has three goals: providing education on disarmament verification and monitoring to the states that do not possess nuclear weapons; encouraging support for “practical, realistic” approaches to arms control and disarmament; and facilitating technical progress on verification challenges.

In a Dec.17 e-mail to Arms Control Today, a State Department official said the effort marked the first time it had “joined in partnership with an outside entity to bring together a broad spectrum of expertise outside the United States” from non-nuclear-weapon states.

The NTI, founded in 2001 by former Sen. Sam Nunn (D-Ga.) and philanthropist Ted Turner, is a nonprofit organization seeking to strengthen global security by reducing the risk of use and preventing the spread of nuclear, biological, and chemical weapons.

In a Dec. 16 e-mail to Arms Control Today, NTI President Joan Rohlfing called the partnership “a true Track 1.5 effort,” indicating that it will include government officials (“Track 1” in diplomatic jargon) and representatives of civil society (Track 2).

Stephen Young, a global security analyst at the Union of Concerned Scientists, praised the plan in a Dec. 16 interview, saying that verification issues are “huge, important issues and they need more investment.”

At the same time, Young said, “to solve the biggest verification problems, we’re eventually going to have to bring Chinese and Russian technical people into the room.” Unfortunately, according to Young, the Chinese have consistently refused such exchanges at the governmental level, saying Russia and the United States need to reduce the size of their nuclear arsenals first. Russia has also been unwilling to cooperate on these questions, he said.

The partnership “is a valuable step, especially if Chinese and Russian participants can be included, even unofficially,” he said. “But more will be required. In the long run, it is obviously essential” for all nuclear-weapon states to be “involved directly.”