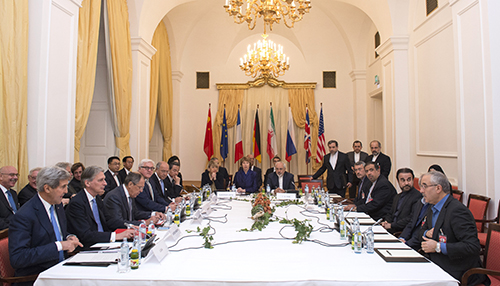 The Iranian nuclear issue has long vexed Tehran’s political and economic relations with the international community. The talks between Iran and the P5+1 (China, France, Germany, Russia, the United Kingdom, and the United States) on Tehran’s nuclear program entered a transformative phase after Iranian President Hassan Rouhani, with the backing of Supreme Leader Ayatollah Ali Khamenei, appointed a new team to lead the Iranian delegation.

Since then, the nuclear talks have made their most meaningful progress to date. Although neither side had shifted on its “nonnegotiables” by the time the self-imposed deadline of November 24, 2014, arrived, there apparently had been enough substantive progress to convince the negotiating countries that an extension of the deadline was desirable. The talks in Vienna closed in November with an agreement to continue negotiating for another seven months and the intention of approving the political framework of a final deal in March.

An extension of the talks had long been in the cards, but its duration was expected by some to be much shorter. The logic was that the longer the extension was, the greater the challenge would be to maintain the necessary diplomatic momentum and urgency for a final deal. To achieve a peaceful resolution of the nuclear issue and enhance global security, either a final deal or a shorter extension of the talks would have been the desirable outcome. Nevertheless, continuing the talks should not be seen as a defeat. There are compelling reasons to prefer an extension over unpalatable alternatives that risk further undermining the prospects for stability in the Middle East.

Although limited information has been made public, the extension process involves several elements.

Formal extension. The interim nuclear deal agreed under the Joint Plan of Action in Geneva in November 2013 will be formally extended until June 30, 2015.1 This follows the first extension to the joint plan in July 2014, when Iran and the P5+1 made additional commitments beyond the plan’s original scope.

Nuclear freeze for access to assets. Iran has agreed to continue the halt in its nuclear program. In return, the P5+1 will provide Iran with access to roughly $700 million per month (a total of roughly $5 billion) of frozen assets. The P5+1 will continue to suspend the same sanctions as outlined in the joint plan, including on automobile parts and the petrochemical sector.

Enhanced safeguards. Iran has agreed to additional obligations that reduce the chances that it will use its nuclear program for military purposes. These obligations include restrictions on research and development into advanced centrifuges, International Atomic Energy Agency inspections without notice at centrifuge production sites, and increased conversion of existing 20 percent-enriched uranium oxide into fuel for the Tehran Research Reactor.[2]

Rough timeline. Negotiators reconvened from December 15 to December 17 at lower political levels for technical talks and will continue to meet at this level with the aim of drafting the parameters of the final deal in March. The remaining time will be spent seeking agreement on technical annexes. If there is no agreement on the framework for a deal by the end of March, the parties are to reassess their positions.

One possible explanation for the length of this second extension to the joint plan is that in the final days of the talks last November, new ideas were proposed on how best to resolve the most difficult outstanding issues, namely Iran’s uranium-enrichment capacity and the timing of sanctions relief. These would require rethinking various elements that would be packaged into a final deal, often described as a Rubik’s cube because of the complexity of finding an acceptable solution and the interlinked nature of the technical solutions, which carry considerable political weight.

The decision to extend the nuclear talks reflects the continued commitment of both sides to reach a comprehensive agreement within a time-bound process. This is a process in which the sides have made substantive progress on resolving differences that once were thought unbridgeable and in which Iran has proven that it can deliver in good faith under the joint plan. U.S. Secretary of State John Kerry noted that negotiators would be “fools” to walk away from the talks at this stage because the plan has provided the “benefit of the doubt” that a final deal can be achieved. Indeed, one benefit of the extension is that it allows Tehran and Washington to prepare their respective constituencies for accepting the difficult compromises needed for a final deal.

An extension is clearly better than failure to reach a deal, a scenario in which both sides could have reverted to a hostile stance, with Iran raising its enrichment levels to more than 20 percent and the West imposing more-extensive sanctions and considering its options for a military response. The extension period benefits the P5+1 by ensuring that Iran’s nuclear program remains subject to inspection and verification and its enrichment capacity is capped in return for minimal financial relief to Tehran. Meanwhile, Iran can further entrench what it claims to be its right to enrichment under the joint plan.

Another benefit of the last year of talks is that they have provided a serious and professional platform for Iran and the West to reshape their previous relations, which were plagued by deep mistrust, into a potentially functional relationship. If the two sides continue to deal with the nuclear issue in good faith, this extension could contribute to a longer-term normalizing effect that creates openings for meaningful discourse on escalating regional conflicts.

Yet, repeated extensions of these talks are not ideal and carry risks.3 The biggest concern is how the opposition forces on both sides can be managed. The Obama administration in particular will have to deal with problems at home. The U.S. situation is pertinent for European companies that are severely restricted in their ability to trade with Iran because of the penalties they could face on their business in the U.S. market as a result of the secondary impact of the unilateral sanctions against Iran that the U.S. government has systematically imposed. President Barack Obama now faces a Republican majority in both chambers of Congress. That majority includes influential lawmakers who wish to see the nuclear talks fail and who will support new sanctions against Iran to make that happen.

In Tehran, there has been fierce opposition to a final deal. As the November 24 deadline for talks approached, however, Iranian hardliners were reportedly restrained by Khamenei’s office and induced to tone down their harsh and vocal opposition to a final nuclear deal. Tehran and Washington will be preparing for a domestic backlash during the course of this extension, which is likely to escalate if the Obama administration is unable to prevent Congress from imposing unilateral sanctions on Iran. If the political parameters of a final deal can be outlined in the coming months, it will boost the momentum of the talks, which otherwise is likely to diminish the longer the negotiations continue.

In the last four days of the talks, the foreign ministers of each of the seven negotiating countries, in addition to those of Saudi Arabia and Oman, made appearances in Vienna for consultations. The White House conducted closed-door briefings in Washington, preparing allies in Congress to back an extension. Israeli officials, meanwhile, claimed that military strikes against Iran’s nuclear facilities remained a viable option, and Israeli Prime Minister Benjamin Netanyahu reacted to the extension by stating that “this result is better, a lot better” than the terms of the deal that were previously under discussion. These events underscore the importance placed on these talks by opponents and supporters of a final nuclear deal, both of whom will be looking carefully for opportunities to make their voices heard during the extension period.

Until now, it has seemed that the leadership and other influential actors in Iran and the P5+1 each believe they are in the position of greater strength. There is a perception by some powerful factions in Tehran that recent events in the region have bolstered Iran’s position of dominance in the negotiations. Meanwhile, influential forces in the West are convinced that a more extensive sanctions policy can extract greater concessions from Tehran. Each side is determined that the other should and will compromise on areas previously claimed to be nonnegotiable. This is an unsettling prospect for these talks; it reduces the flexibility required for the painful concessions that both sides will have to make.

If there is to be a comprehensive agreement, whether in the immediate or the distant future, leaders in the P5+1 and Iran need to allow more political space for their negotiators to settle the nuclear issue. Otherwise, they risk waiting so long for the opposing side to blink first that they will squander an opportunity for a final deal that would without doubt strengthen global security.

Ellie Geranmayeh is a policy fellow at the European Council on Foreign Relations specializing in EU-Iranian relations.