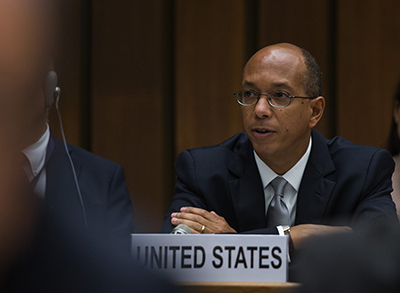 With the attention of many delegations starting to turn toward the 2016 review conference, the states-parties to the Biological Weapons Convention (BWC) met Dec. 1-5 in Geneva.

In the accounts of several observers and participants, the approach of the review conference helped spur a raft of proposals to strengthen the treaty and its processes. But some accounts portrayed a sharply divided meeting.

One observer who attended the meeting remarked in a Dec. 9 e-mail to Arms Control Today that “broader geopolitical issues are spilling into the BWC.” That development is “[n]ot a surprise but could sink hopes for the review conference, which needs to make real progress on effective implementation,” the observer said.

A large number of the proposals focused on verification and compliance, a perennial BWC topic of debate, and on modifications to the so-called intersessional process, the series of meetings that the parties hold during the five years between review conferences. Many of the proposals and statements echoed positions that were articulated at the 2011 review conference. (See ACT, January/February 2012.)

In its opening statement, the European Union suggested a mechanism under which the parties could begin holding “informal consultations” that “could focus on areas that are likely to command consensus.”

At the December meeting, Myanmar became the 171st party to the BWC. In his statement welcoming Myanmar’s ratification to the treaty, Robert Wood, the U.S. ambassador to the Conference on Disarmament and special representative for BWC issues, said that “[s]hould Myanmar so desire,” the United States “stands ready to assist” in areas such as incorporating Myanmar’s incorporation of its BWC obligations into its national laws, regulations, and practices.