– Amb. Thomas Hajnoczi
Chair, MTCR
May 19, 2021
Congress and the Future of the Iran Talks 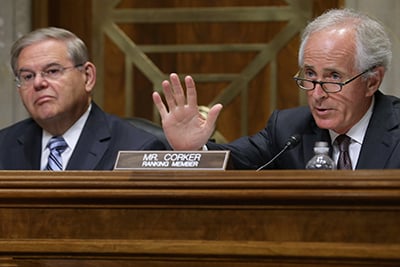 Following the announcement on November 24, 2014, that Iran and the P5+1 (China, France, Germany, Russia, the United Kingdom, and the United States) were extending the Vienna talks on Iran’s nuclear program, pressure has been building in Washington and Tehran against the negotiations. Domestic opposition in both countries has been empowered by this delay. Some in the U.S. Congress have even called for an end to the negotiations or threatened new sanctions.

It would be a dangerous folly if the progress achieved so far under the Joint Plan of Action, the interim agreement reached in November 2013, were to be discarded. Over the past year, this agreement has proven to be the most effective policy tool in the history of the Iranian nuclear dispute for limiting and rolling back the most worrisome aspects of Iran’s nuclear program. The joint plan, however, is not enough. Failure to reach a follow-on, comprehensive agreement could have serious and unwelcome consequences for nuclear nonproliferation, U.S. regional allies, and U.S. national security interests.

Since the signing of the joint plan, the world has reason to be more confident that Iran will not acquire a nuclear weapon. Tehran has stopped the most disturbing elements of its nuclear program by ceasing production of 20 percent-enriched uranium hexafluoride and eliminating most of its stockpile of that material, halting work on the still-unfinished Arak heavy-water reactor, and setting limits on its stockpiles of low-enriched uranium. Each of these activities was a major U.S. concern less than a year ago.

The International Atomic Energy Agency (IAEA) has daily access to Iran’s enrichment facilities and continues to report that Iran is in full compliance with its commitments under the joint plan. Even Israeli Prime Minister Benjamin Netanyahu and other Israeli officials, who a year ago harshly criticized the plan, have recognized its benefits and welcomed its extension as preferable to a new agreement now.

Some Americans have criticized this extension for drawing out the negotiations. Yet, these negotiations are among the most complex and important since the end of the Cold War. Seven independent countries, each with a different agenda, have been engaging in discussions for more than a year. The U.S. and Iranian governments, who are the central players, had not talked for almost 35 years. The negotiations have proceeded during a period when U.S. bilateral relations with two members of the P5+1, Russia and China, have been deteriorating. Although both countries have stayed on track with the P5+1, more-serious confrontation with Russia could derail that collaboration. Should the group not remain united under U.S. leadership, Iran might well find ways to take advantage of the differences, particularly by seeking to unravel the international sanctions regime.

In addition to the bewildering array of political and historical obstacles, the technical and scientific issues are unprecedented in their complexity. The reconfigurations of the Fordow underground enrichment facility and the Arak reactor have required new thinking and scientific approaches to determine whether a compromise could be found that is politically acceptable to both sides. There remains a need for greatly increased monitoring of the program by the IAEA to assure compliance and to deter Iran from building clandestine facilities.

These nettlesome issues could be managed if the two major questions could be resolved. The first is how to meet Iran’s demands for an industrial-scale enrichment program without allowing Tehran to produce sufficient highly enriched uranium for one nuclear weapon in one year. The second is how to carry out a gradual relaxation of economic sanctions as an incentive for Iran’s compliance without a commitment to meeting unrealistic and potentially irreversible Iranian demands up front. Resolution of these questions would be possible if both sides took progressive steps that would take effect incrementally over the entire implementation period of the agreement.

With this extension, negotiations will not become easier, nor will the possibility of further extensions be attractive in light of the growing opposition in each country and the complexities of concluding an agreement. Yet, the stakes are clear. Preventing an Iranian nuclear weapon must remain the U.S. goal. Only a sound and verifiable settlement will bring about long-term assurances that Iran’s nuclear program will be peaceful.

Many Iranians oppose the negotiations and accuse President Hassan Rouhani of selling out Iranian interests. These critics argue for a return to a “resistance economy” to counter sanctions. Iranian Supreme Leader Ayatollah Ali Khamenei has recently sought to silence these critics by signaling his support for the negotiations. In early December, one of Khamenei’s closest advisers, Ali Akbar Velayati, said, “Our country’s nuclear negotiation team has thus far observed all redlines drawn” by Khamenei and has put forth a “tremendous effort,” which is “worth appreciation.” Because Khamenei is the highest authority in the country, if he “said that he agrees with the negotiations and with their continuation, arguments against the nuclear negotiations should not be made,” Velayati said.[1]

In the United States, some members of Congress are displeased by the extension of the negotiations and are persuaded that the threat of more sanctions would force Iran to make more concessions. Neither the United States nor the other P5+1 states believe that this is the case. The authors of this article agree. Rather than inducing concessions, such action could have the opposite effect and cause Iran to dig in, lash out, and walk away rather than risk appearing humiliated in front of its own public.

New sanctions may precipitate a tit-for-tat response by Iran, prompting a renewed cycle of additional U.S. sanctions and construction of Iranian centrifuges. This dynamic, all too familiar to both sides, would damage the United States’ leadership role in the world and result in an Iran even more hostile to U.S. interests. This vicious cycle could lead to a nuclear-armed Iran and eventually to a war.

More important than Iran’s response might be the reaction of countries that currently support the U.S.-led sanctions regime. Additional sanctions from Congress will be interpreted in Iran and around the world as a unilateral breach of the commitments the United States made in the joint plan, which obliges the parties to refrain from additional sanctions while negotiations are ongoing. Even so-called trigger sanctions, which the president could implement if he felt the need, would likely be seen as inconsistent with that commitment.

If Congress insists on imposing sanctions over President Barack Obama’s opposition to such action, it will appear to the international community that the United States is unwilling or unable to abide by its commitments. In that circumstance, Europe, Russia, China, and others might well back away from the unprecedented international sanctions regime that helped bring Iran to the negotiating table in the first place, causing the entire structure to crumble.

Congress should refrain from taking actions that risk undermining the negotiations at this critical juncture. The talks may yet fail, and if they do, Congress can act at that time.

This may be the last opportunity for many years for the United States to reach a negotiated settlement in which Iran makes verifiable commitments to scale back its nuclear program and assure the world that the program will remain peaceful. Absent an agreement, Iran’s nuclear activities will be unconstrained, and the chances of Iran ultimately acquiring a nuclear weapon will increase. The negotiations are the best hope for advancing the national security goals of the United States and its allies. If Americans hope to achieve a durable and effective agreement, they need to support the negotiating team at this critical moment.

William Luers, a former U.S. ambassador to Venezuela and Czechoslovakia, is director of the Iran Project and an adjunct professor at the School of International and Public Affairs at Columbia University. Thomas Pickering is a former U.S. undersecretary of state for political affairs and ambassador to Russia, India, Israel, Jordan, and the United Nations. Jim Walsh is a research associate in the Security Studies Program at the Massachusetts Institute of Technology.