The U.S. government could save more than $60 billion in required funding over a decade by reducing the number of nuclear delivery systems and adjusting current nuclear modernization plans while still retaining all three legs of the nuclear triad, according to a December report by the Congressional Budget Office (CBO).

The report comes as official cost estimates to maintain and modernize U.S. nuclear forces continue to rise and President Barack Obama hands over stewardship of the arsenal to President-elect Donald Trump. In a tweet, Trump declared that the United States “must greatly strengthen and expand its nuclear capability until such time as the world comes to its senses regarding nukes,” although it was unclear whether he was referring to maintaining the current modernization program or to further steps that run counter to U.S. efforts to reduce nuclear weapons in numbers and destructive power. 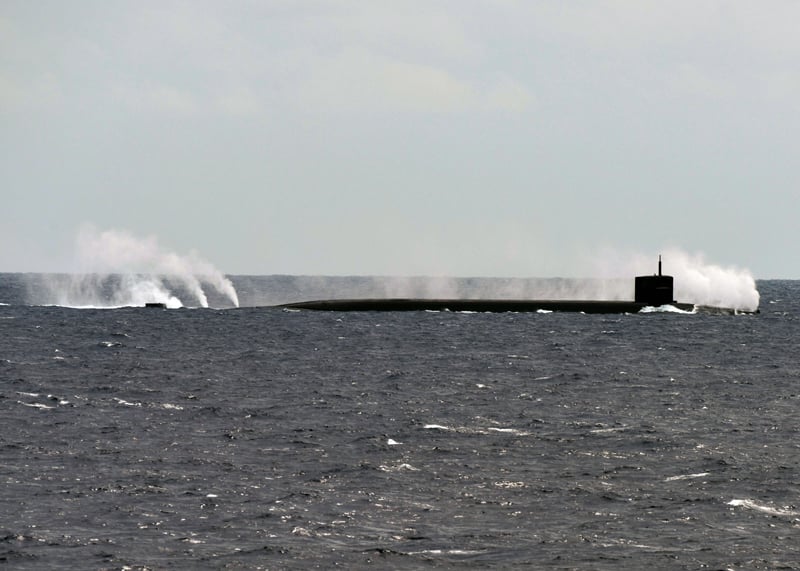 Currently, nearly every element of the U.S. arsenal is slated to be modernized over the next 20 years, an effort that will require roughly doubling annual spending on nuclear weapons. Most of these efforts are in the early stages, but a few others have yet to begin. Multiple independent studies suggest that the total cost of the current plans could reach and possibly exceed $1 trillion over 30 years.

Senior officials from the Defense and Energy departments have warned for years about the affordability challenges, but argue that the expenditures are needed to sustain a credible nuclear deterrent and can be successfully carried out if appropriately prioritized. Critics in Congress and the nongovernmental arms-control community contend that the current approach exceeds the Obama administration’s stated requirements for nuclear deterrence and that the cost will force damaging cuts to higher-priority military programs given that overall defense budgets are likely to remain constrained even after the Budget Control Act, which imposes caps on military spending, expires in 2021.

The CBO evaluated three different options to reduce spending on nuclear forces over the next decade as part of larger report titled “Options for Reducing the Deficit: 2016 to 2027.”

One option would reduce the number of intercontinental ballistic missiles (ICBMs) and submarines that launch ballistic missiles by retiring some of the existing systems early, purchasing fewer of the new ones, and delaying purchase of new submarines. A second option would retain only one type of nuclear weapon for bombers by forgoing either the purchase of a new fleet of air-launched cruise missiles (ALCMs) or the life extension program for the B61 nuclear gravity bomb. A third option would delay the development of a new bomber, known as the B-21, by 10 years (see chart).

In addition to assessing the savings from each option, the CBO evaluated arguments for and against each alternative. For example, the CBO noted that reducing the triad to 1,000 deployed warheads would be consistent with Obama’s determination in 2013 “that the United States could maintain a ‘strong and credible’ strategic nuclear deterrent with about one-third fewer weapons deployed than allowed under” the 2010 New Strategic Arms Reduction Treaty (New START). 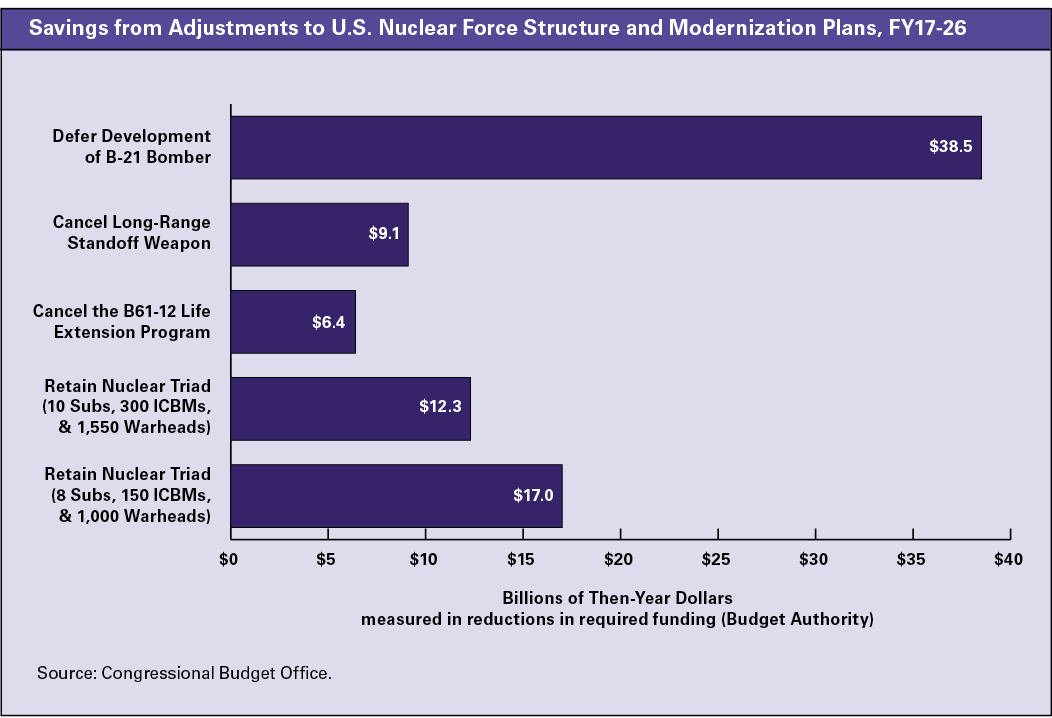 Conversely, the CBO said that a problem with “this alternative is that unless a new arms control agreement was reached—which may not be possible in the current international atmosphere—the United States’ decision to reduce its stockpile to 1,000 warheads would be unilateral and could be politically untenable domestically.”

In addition to the December options report, the CBO published reports in 2013 and 2015 that assessed the total cost to sustain and modernize U.S. nuclear forces over the ensuing decade. (See ACT, March 2015.) The agency is required by law to update this study every two years, but by year-end had yet to publish an update covering the period from fiscal year 2017 to fiscal year 2026.

In remarks at the Reagan National Defense Forum in Simi Valley, California, on Dec. 3, Sen. Dan Sullivan (R-Alaska), a member of the Senate Armed Services Committee, said the Pentagon is projecting to spend $234 billion on nuclear forces between fiscal years 2017 and 2026. This is an increase of nearly $17 billion over the decade-long estimate the Defense Department released in 2015.

The $234 billion estimate does not include the Energy Department’s cost to maintain and modernize U.S. nuclear warheads and their supporting infrastructure, which carries a 10-year price tag of more than $100 billion. (See ACT, May 2016.)

In remarks last summer at the Arms Control Association’s annual meeting in Washington, Benjamin Rhodes, assistant to the president and deputy national security adviser for strategic communications, said Obama was continuing to evaluate the nuclear modernization plans. (See ACT, July/August 2016.) As of early January, the administration had not announced any decisions on adjusting the plans or to signal it had made recommendations to the incoming Trump administration on how to proceed with them. (See ACT, January/February 2017.)